This hard drive and solid-state storage specialist is cheap for a reason, but adventurous investors might want to start nibbling at the stock anyhow. Here's how.

We Western Digital (WDC -0.79%) investors are feeling some pain these days. The data storage veteran's stock is trading 55% below its 52-week highs, just 13% above its share price at the end of 2012. The S&P 500 nearly doubled over the same period.

Is it time to stop the bleeding and sell Western Digital, or are we looking at an investment opportunity here?

Plunging stock prices are often tied to weak sales and/or earnings. That's not the case for Western Digital in 2018. Share prices started to slide after the third-quarter report in April, even though the company beat Wall Street across the board and issued solid guidance for the next reporting period. In that earnings call, CEO Steven Milligan said that average selling prices for the company's storage products are "normalizing" after a long stretch of stable and sometimes even rising prices.

Taken together with similar statements from sector peers like memory chip specialist Micron Technology (MU -3.03%), analysts and investors were quick to conclude that Western Digital's days of coasting comfortably on a foundation of stable disk prices were ending, especially in the market for memory-based solid state drives (SSD).

The same worries resurfaced in the fourth- and first-quarter reports, driving Western Digital shares lower despite mixed-to-respectable results. End-user demand for data storage products is waning due to uncertainty about where the global economy is headed. Micron, Western Digital, and other hardware makers are responding by tapping the brakes on their production volumes until these issues have been worked out. 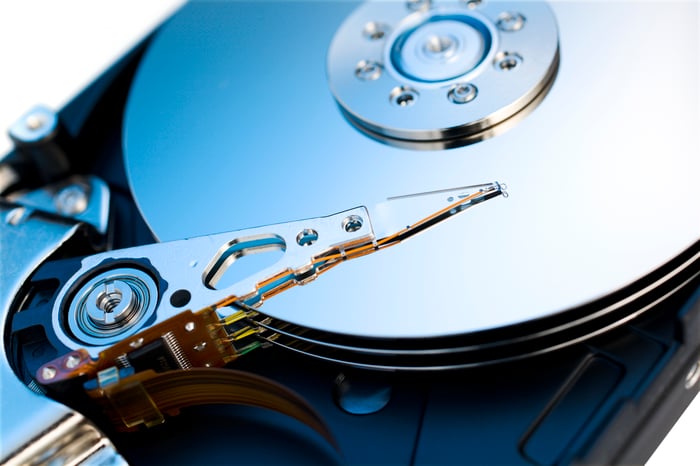 Buy, sell, or watch from a safe distance?

However, there's some lag built into these valuations as the drivers behind Western Digital's recent misfortunes could stick around for quite a while. Memory chip prices are generally expected to solidify again in 2019, but it's harder to predict how the international trade wars will develop. The stock may continue to drop for at least another couple of quarters and perhaps more, even if the long-term prognosis looks good.

So Western Digital isn't exactly a screaming buy right now. It's better to keep an eye on memory prices and global politics for a while, ready to pounce on that "buy" button when the market conditions start to improve. And if you don't want to tempt the fates with market-timing guesses, buying Western Digital in thirds makes a lot of sense.

Why Micron Is Rallying Today
415%