Shares of construction materials manufacturer GCP Applied Technologies (NYSE:GCP) are up 14.6% as of 2:00 p.m. EST today after management reported earnings and announced that hedge fund Starboard Value has taken a considerable position in the company.

The actual earnings results at GCP weren't enough to get investors too excited. On an adjusted basis, the company reported earnings per share of $0.29, which was slightly ahead of analyst estimates of $0.28 per share. Total revenue for the quarter was down 4.6%, in large part because of management's decision to exit certain geographies for its specialty construction chemicals segment. 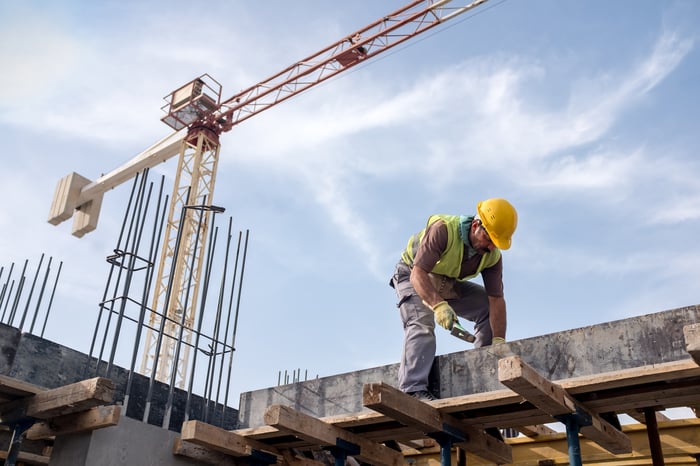 In addition to today's earnings announcement, the board of directors announced that hedge fund Starboard Value has taken a 4.6% stake in GCP and intends to nominate several members to the board at the next annual meeting. As part of that letter, the board and management said they would be conducting a comprehensive review of the business as well as enacting a corporate restructuring to cut costs. The goal of this plan is to simplify the business and, according to the letter, "deliver an additional approximately $25 million in total annualized cost savings, bringing total expected annualized cost savings from our three restructuring programs to approximately $80 million in 2020."

Ever since GCP was spun out of specialty chemicals and materials conglomerate W.R. Grace (NYSE:GRA) back in 2016, the stock has more or less kept pace with the S&P 500. With North American housing slowing down and international material costs increasing, though, the company's expectations for 2019 are a bit muted, and the focus for preserving profitability will center around costs.

The board of directors said that it will be amenable to adding some of Starboard Value's nominees to the board, but we'll have to wait and see what happens, as the hedge fund looks to shake up the company in the coming months.