After rebounding with the broader market in January, HP stock got clobbered in late February, following a disappointing earnings report that showed the company's printing segment struggling to grow amid heightened competition. 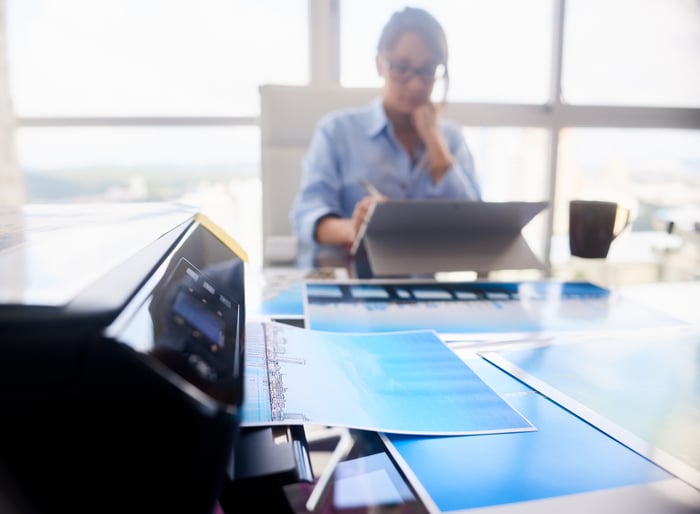 For the fiscal first quarter of 2019, HP saw a 1% year-over-year revenue increase to $14.7 billion. That translated to growth in non-GAAP earnings per share of 8% over the year-ago quarter to $0.52. Those numbers were in line with management's outlook, but investors apparently wanted more.

Specifically, investors didn't like the performance in HP's printing supply business, where revenue declined 3% year over year to $3.3 billion. For that, management blamed weak supply sales in Europe, the Middle East, and Asia, as well as a decline in market share and pricing as customers shifted their purchases of printing supplies online, which doesn't play to HP's strengths.

The concerns about HP's printing business brought on a series of bearish comments from Wall Street analysts, which painted a negative picture over the whole quarter and contributed to the stock's decline.

HP is facing challenges in maintaining growth in its PC business, as the upgrade cycle has lengthened, and as more people shift their computer usage to mobile devices. Given those secular headwinds, analysts needed to see growth in all phases of HP's business to have confidence in its ability to grow, which didn't happen.

On the bright side, HP is showing leadership in delivering innovative new experiences in notebooks, especially for gaming. But that's just one piece the company must get right to deliver the goods to investors, and right now HP appears staggered.

Despite the negatives, there seems to be limited downside in the stock at this point. HP stock trades for a trailing and forward P/E multiple of 7.5 and 8.6, respectively, which seems low given that analysts expect the company to post low-single-digit growth in revenue and earnings over the next two years. Plus, the stock offers an above average dividend yield of 3.25%, which should entice income investors.