Microblogging platform Twitter (NYSE:TWTR) reported first-quarter earnings this morning, and the results showed continued progress in cleaning up the platform, which in turn has translated into stronger engagement and monetization. The company had introduced a new user metric last quarter, monetizable daily active users (mDAUs), which continues to march higher, thanks in part to Twitter adopting a more proactive approach to combating abuse and harassment.

Total revenue jumped 18% to $787 million, with the core advertising segment and data licensing business putting up healthy gains of 18% and 20%, respectively. Costs and expenses rose at a comparable rate, up 18% to $693.2 million, resulting in $93.7 million in operating income. Net income more than tripled to $190.8 million, thanks in large part to a tax benefit related to the "establishment of a deferred tax asset for corporate structuring for certain geographies." That's similar to what happened last quarter.

In terms of users, both mDAUs and monthly active users (MAUs) ticked higher on a sequential basis. Twitter added 8 million mDAUs in the first quarter, bringing its total to 134 million. MAUs climbed to 330 million. Most of the mDAU gains were international, with U.S. mDAUs roughly flat. The same was true for MAUs. This is the last time that Twitter will disclose MAUs, after the company said in February that it planned to shift its reporting to focus solely on mDAUs. 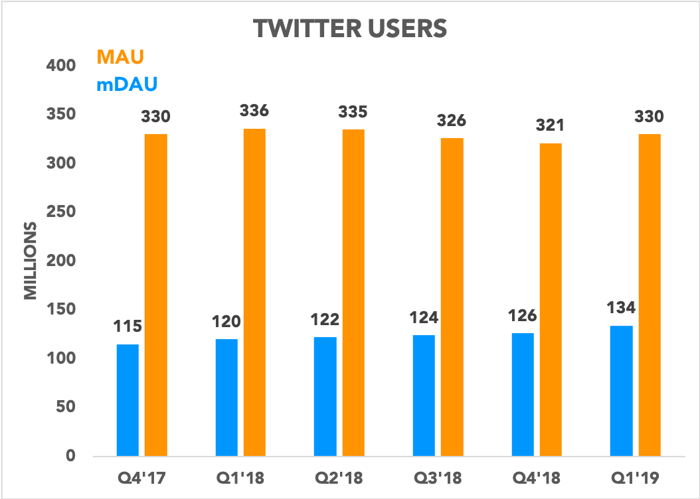 Ad engagements increased 23%, while the cost per engagement fell 4%. As usual, the U.S. represented the bulk of advertising revenue (a little over half), despite U.S. mDAUs representing just 20% of the global mDAU base.

Twitter has been working on being more proactive with platform health and has deployed new machine-learning algorithms that flag potential violations for review. "We are reducing the burden on victims and, where possible, taking action before abuse is reported," CEO Jack Dorsey said in a statement. "For example, we are now removing 2.5x more Tweets that share personal information and ~38% of abusive Tweets that are taken down every week are being proactively detected by machine learning models."

Heading into the second quarter, Twitter says platform health remains its top priority, while the company will also continue promoting conversations and investing in revenue products to further improve monetization. In terms of guidance, revenue in the second quarter should be $770 million to $830 million, compared to the consensus estimate of $819.3 million in sales. Operating income is expected to be $35 million to $70 million.

In recent quarters, Twitter has demonstrated that it can grow the business even when the user base isn't growing. The company has been profitable at times thanks to cost-cutting, but at other times the black ink is attributable to actual revenue growth. Posting revenue growth alongside user growth in the first quarter is the best of both worlds.