Shares of the online travel agency dipped following weak growth in its home-rental segment in its earnings report.

Shares of online travel agency Expedia (EXPE -0.47%) were heading lower last month after the company saw a slowdown in its key home-rental segment, a sign that the company may be struggling to compete with Airbnb. It also got hit by rising trade tensions and an analyst downgrade. The stock finished May down 11% according to data from S&P Global Market Intelligence.

As you can see from the chart below, the stock's sell-off came at the beginning of the month, starting with its first-quarter earnings report. 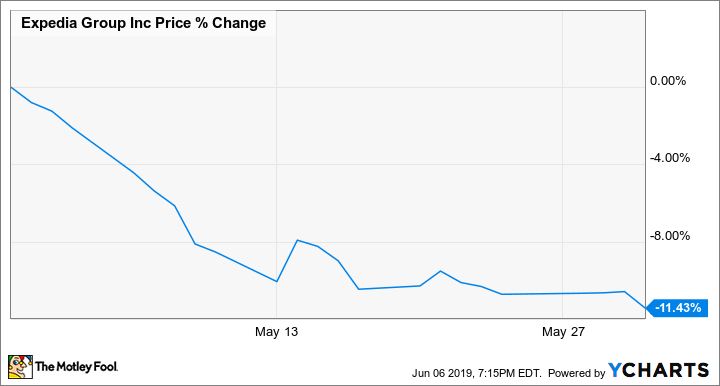 The initial response to Expedia's first-quarter earnings report was modest as the stock fell just 1% on May 3 after the report came out. Revenue crept up 4%, or 7% in constant currency, to $2.59 billion, short of estimates at $2.69 billion. Wall Street was also concerned about slowing growth at VRBO, the vacation-rental site formerly called HomeAway, which saw sales increase just 14% in the period. Gross bookings on the platform increased just 5%, slower than the core business, which put up 9% bookings growth. The home-rental segment made up about 10% of total revenue on the quarter. 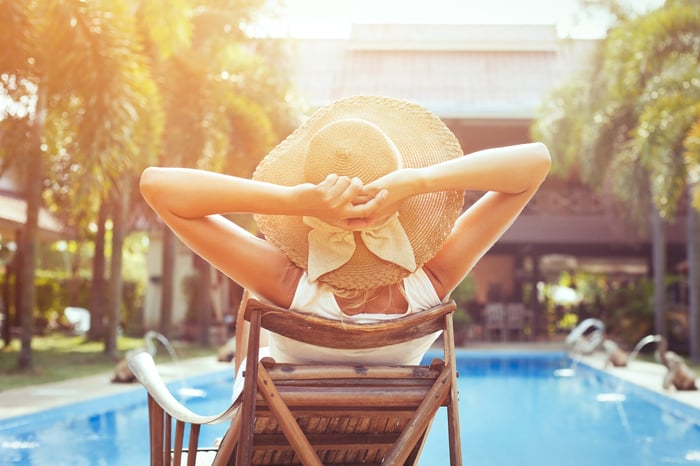 The parent of brands including Hotels.com, Hotwire, and Travelocity, Expedia said that its adjusted loss per share improved from -$0.46 to -$0.27 during the seasonally slow first quarter, but that beat estimates at a -$0.38 per-share loss.

The following session, the stock took another hit after a downgrade from Susquehanna analyst Shyam Patil, who downgraded the stock to neutral on concerns about slowing growth on VRBO. The stock lost 2.5% on that news, and continued to decline on concerns about an escalating trade war with China, which threatens the travel industry, as it's particularly sensitive to macroeconomic trends.

Expedia has recouped some of last month's losses in the first days of June as the Federal Reserve has signaled that it's willing to give the economy a boost if trade tensions worsen. However, the slowing growth at VRBO is a serious concern for the company. Management blamed that on a decision to streamline its alternative accommodation brands to emphasize VRBO, which has hurt SEO at other brands in the meantime, though the company is confident it's the right strategy for the long term.

Expedia did not issue guidance, but the stock now trades at a modest P/E ratio of 20, meaning the headwinds from the challenges at VRBO and the trade war seem to be already baked into the stock price. That should help investors if sluggish growth continues.

Why Expedia Stock Fell 18% in December

Travel Is Back, but This Stock Still Has a Bumpy Road Ahead
405%