Starting in 2015, the restaurant industry entered a prolonged slump. For a while, it looked as if Dave & Buster's (NASDAQ:PLAY) could buck the trend -- but it too eventually started to lose comparable-store business in late 2017.

Shareholders started this year off with a bang: Comps once again went positive, and the future looked bright. That party, however, ended this week, when the company's earnings were a disappointment. The forecast for the rest of the year was even worse. 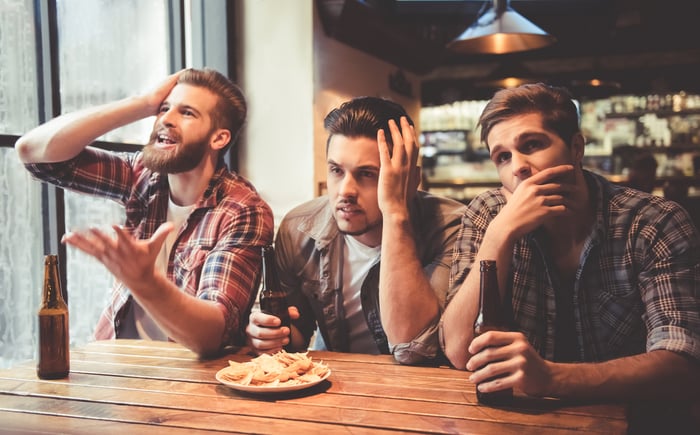 Before we get into the details of why the quarter was so disappointing, let's check out how the company performed on the headline numbers.

On the face of it, these results aren't all that bad. Almost 10% growth on the top line is solid -- as is almost 9% growth in earnings in the face of rising minimum wages. And the free cash flow situation is in a state of flux thanks to the company's expansion plans.

Yet this hardly tells the whole story. Perhaps most important, the company wasn't able to keep comparable-store sales positive as it had forecast last quarter. 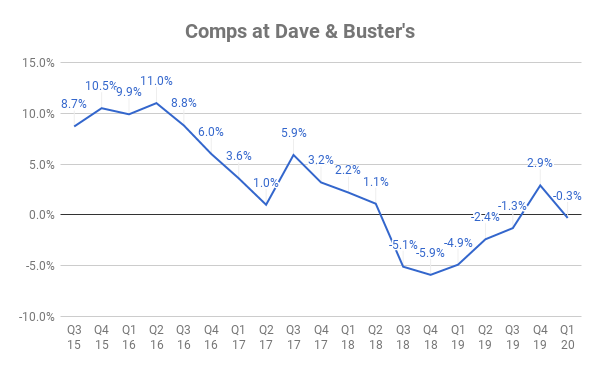 There were a number of reasons for the negative turn. First, while special event comps grew 3%, walk-in sales dropped 0.6%. And even though comps for amusement, the games Dave & Buster's offers patrons, were up 1.8%, comps for food and beverage were down 3.3%.

While the company is benefiting from more sales of high-margin amusement games, it hasn't found a way to stem the tide of increased expenses for its workforce. With fewer people coming through the door, that's become a real problem.

Management also admitted that cannibalization in more mature markets and encroachment from competitors played a significant role in the slower-than-expected sales.

Management spent a lot of time talking up both the good and bad of the quarter. This included:

The company's revised forecast for full-year 2020 is what probably caused shares to dip dramatically in after-hours trading. Here's how the outlook changed:

It's become clear that Dave & Buster's has found a winning combination with its high-margin amusement business. The company needs to shore up its food business, draw in more customers, and convince investors that it can eventually get payroll costs under control to get back on track.