Please ensure Javascript is enabled for purposes of website accessibility
Log In Help Join The Motley Fool
Free Article Join Over 1 Million Premium Members And Get More In-Depth Stock Guidance and Research
By Reuben Gregg Brewer – Jun 24, 2019 at 8:51AM

Investors look to these companies for safety in a storm, but the prices today suggest you might want to think twice before jumping aboard.

When investors think about utilities, electricity is normally top of mind. However, there's a subset of utility stocks that provide an even more important product: water. In fact, there's a lot to like about the story surrounding the water utility subgroup. The problem is that Wall Street is well aware of the story, and this historically conservative niche may be riskier than investors think today.

There's no question that supplying water is a great utility niche to be in. Next to air, water is the second most important ingredient for life. You can go for weeks without food, but only a few days without water (you could, arguably, live forever without electricity). And while water makes up 70% of the Earth's surface, only around 2.5% is potable. And of that drinkable water, only around 1% is easily accessible. The United States is blessed with significant fresh water supplies, but being a key facilitator in this value chain is pretty desirable. 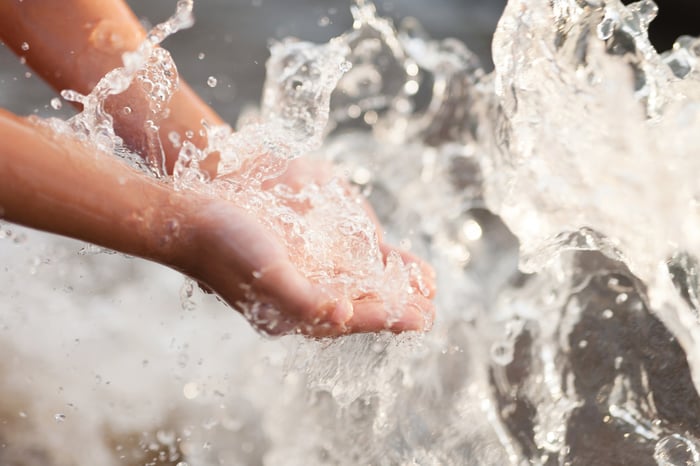 That's exactly what American Water Works, American States Water, and Aqua America do. They move drinkable water through their systems while also taking care of the wastewater humans create. It is the epitome of a necessary service that consumers will pay for no matter what is happening in the economy or the stock market, but it gets even better.

The United States has woefully underfunded its infrastructure, with the American Society of Civil Engineers giving the country an overall grade of D+ during its last review in 2017. While some infrastructure got better grades, like the B given to the country's railways, drinking water and waste water "earned" a D and D+, respectively. It costs a lot of money to upgrade aging water systems, with the Environmental Protection Agency estimating that drinking water will require $473 billion of investment to bring it up to snuff, and wastewater another $271 billion.

The problem is that the domestic water system is highly fragmented and largely owned by cash-strapped municipalities that will have a hard time affording the expense, which gives water utilities a long platform for acquisition-driven growth. But those acquisitions also lead to long-term investment opportunities as the companies work to upgrade their growing network of water systems. Further, these are regulated utilities, so the capital spending plans they have in place are approved and basically locked in. It doesn't matter if the stock market is crashing or the economy is faltering -- water pipes are still going to be replaced.

To put some numbers on this opportunity, American Water Works is projecting annual earnings growth of 7% to 10% through 2023, with capital investment plans of $7.3 billion in its regulated business contributing 5 to 7 percentage points of that total. Acquisitions will add another percentage point or two, with non-regulated businesses rounding out the total. Neither American States Water nor Aqua America provide such long-range projections, but they are both working the same basic levers. American States has increased earnings at a roughly 10% annualized pace over the past decade, with Aqua's bottom line increasing around 6% annualized over that span.

That said, Aqua America is in the process of buying natural gas company Peoples to diversify its business. Any long-range projections would change drastically once the deal is closed -- likely in the second half of the year. However looking at past performance, the costs associated with this deal pushed 2018 earnings lower by $0.33 per share and, thus, reduced the company's long-term growth rate (which would have been closer to 10% without that hit). In other words, Aqua's results are better than they first appear. 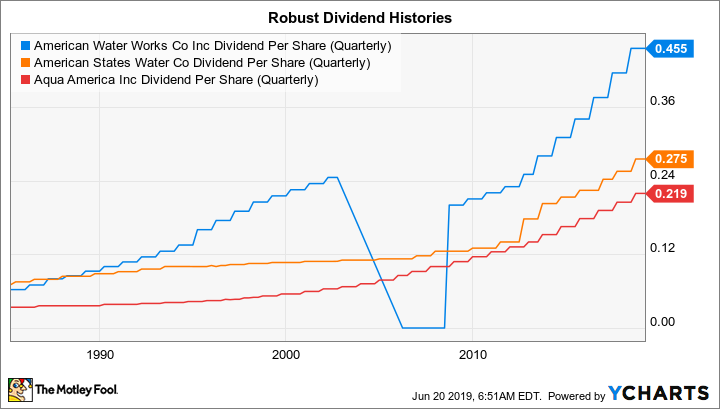 Adding to the allure of this utility niche, all three of these water companies have long histories of annually increasing dividends. American Water Works has the shortest streak at 12 years, but it's only been public in its current form since 2008 (it was owned by another company for a few years prior to coming public again). Aqua America has amassed a 26-year streak, and American States Water has upped its payment annually for an incredible 64 years and counting.

But don't jump just yet

So far, there's a lot to like about water utilities. However, there's one big drawback today: valuation. Investors are well aware of the story backing these companies, and with the market near all-time highs, they have bid the shares up. Yes, the businesses will likely continue to perform well during the next market downturn or economic malaise, but that doesn't mean the stocks will. To put it simply, even a great company can be a bad investment if you pay too much for it.

What do the numbers really say, here? American Water Works' price-to-sales ratio is currently around 6 versus a five-year average of roughly 4. Its price-to-earnings ratio is 37 compared to a longer-term mean of 28.5. Price to cash flow is nearly 16 with, the five-year average at roughly 10.5, and price to book value is similarly skewed, coming in at 3.5 versus an average of 2.5. The yield, meanwhile, is a miserly 1.7%. American Water Works is expensive. 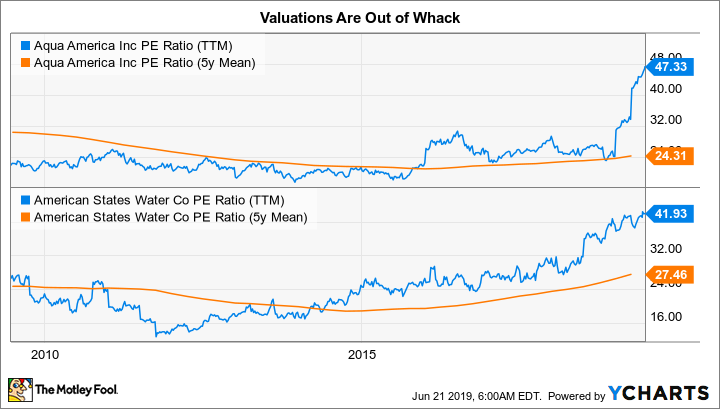 It's the same basic story at American States Water and Aqua America, too: These key valuation metrics are all above their five-year averages. As for yield, American States' yield is a tiny 1.5%, with Aqua's 2.1% yield really only roughly matching what you might get from an S&P 500 Index fund. These water utility stocks are not bargains today. Yes, the underlying businesses remain strong and have promising outlooks, but investors are paying a premium price for them. And that suggests that anyone buying today thinking that the stocks will hold up well during the next market downturn could end up sorely disappointed.

The dichotomy here is between the water utility story and stock prices. Yes, the story is very good. But the price isn't. It bears repeating: Even a great company can be a bad investment if you pay too much for it. That clearly appears to be the case today for American Water Works, American States Water, and Aqua America. And because of their high prices, they probably won't be the safe harbor in a storm that investors may be expecting. Think carefully before you jump aboard these water utility stocks.