Amazon.com (NASDAQ:AMZN) has been a tremendous investment over the years. Over just the last five years, shares of the e-commerce titan have gained a whopping 476% (through July 5) -- more than seven times the S&P 500's 67% return.

While this is great for investors who have owned the stock for some time, the key thing investors want to know now is where Amazon will likely be in the future -- let's say five years from now.

Not even famed seer Nostradamus could predict the future with complete accuracy. However, we can use what we know about Amazon's business model to make an educated forecast about what its future will look like in the year 2024. 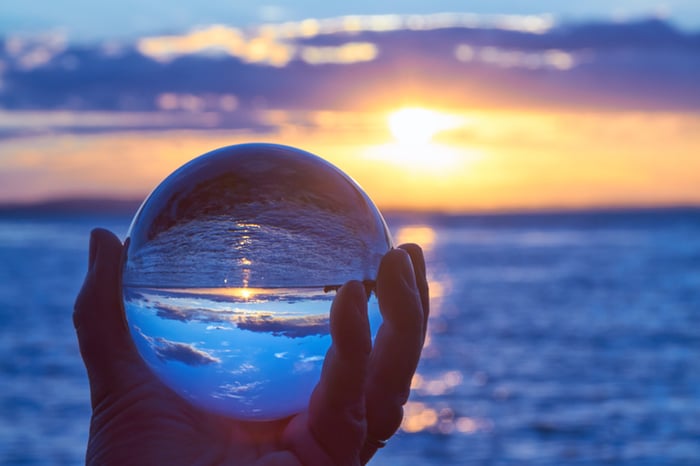 Jeff Bezos will still be running the show

Amazon founder and CEO Jeff Bezos turned 55 earlier this year. If we fast-forward to 2024, it seems more likely than not that a 60-year-old Bezos will still be leading the company. Investors should hope that's the case, as he'll be very difficult to replace.

E-commerce's current approximately 10% share of U.S. retail sales will continue to increase, with a similar dynamic occurring in international markets. Amazon will continue to be the prime (pun intended) beneficiary of the growing size of the sector pie. Not only do many people love the convenience of shopping online, but they specifically love Amazon, thanks largely to its massive selection and loyalty program, Prime. In fact, Amazon captured nearly 50% of all e-commerce sales in the United States in 2018. That means it had a roughly 5% share of total U.S. retail sales last year. 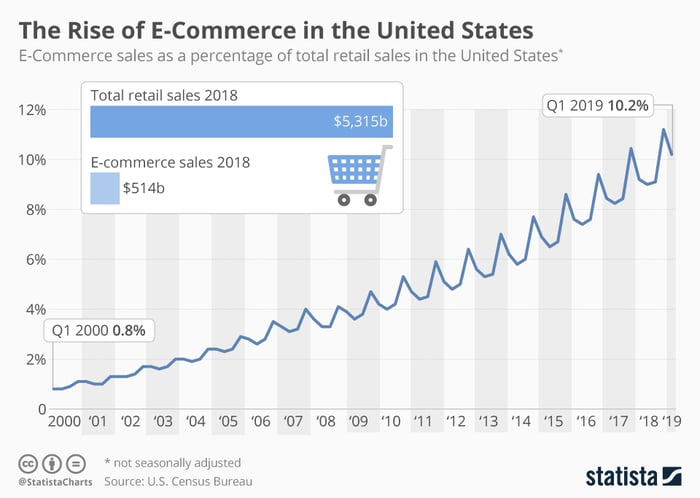 Amazon Web Services (AWS) will be much bigger

Amazon Web Services (AWS) is the dominant player in the fast-growing cloud computing service market. In 2018, it had a 32% market share of this $80 billion global market, which grew 46% year over year, according to market research firm Canalys.

The cloud service space is widely expected to continue to grow rapidly, and there's every reason to believe that AWS will still be the market leader in 2024. If this proves the case, Amazon's operating income should continue its upward climb. In the first quarter, the ultra-profitable AWS generated just 13% of the company's overall revenue, but 50% of its total operating income.

Amazon will be disrupting the U.S. pharmacy market

In 2024, Amazon should be well on its way to disrupting the approximately $400 billion U.S. pharmacy market. Last year, the company bought online pharmacy PillPack, giving it the ability to speedily deliver prescription drugs across the country.

It will enter the U.S. marijuana market as soon as federal legalization occurs

I can't predict when marijuana will be legal on a federal level in the U.S., but once it is, look for Amazon to enter the market. Its initial move will probably be carrying cannabis products at its Whole Foods stores and making select ones available for free two-hour delivery via its Prime Now service.

Amazon is doing just this with alcohol -- beer, wine, and (in some cases) spirits -- in select cities. So, it has procedures in place to deliver regulated products.

In 2024, fully autonomous vehicles should be legal across the U.S. or at least fast approaching receiving the federal green light. Look for Amazon to be an early adopter of driverless vehicles for at least some portions of its delivery operations. It might also be using drones -- or on the verge of doing so -- for some deliveries from its fulfillment centers to customers.

Amazon's other existing businesses, including its advertising and Alexa-powered smart-home businesses, should also be notably larger in five years. The company will also continue to expand into entirely new businesses.

What about Amazon's stock price?

Nobody can predict with any degree of accuracy the stock price of any company five years out. There are too many variables, including the states of the stock market and the economy. However, if you invest in the right companies, stock prices should take care of themselves over the long haul.

For whatever it's worth, Wall Street expects Amazon to grow earnings at a torrid average annual pace of 94% over the next five years.