Stocks have tumbled to kick off August as trade tensions have again flared with China. President Trump has threatened new tariffs against his chief agitator, and China has responded by devaluing its currency, and even targeting specific U.S. imports like soybeans.

While the S&P 500 has already lost 4.6% through its first three sessions this month, stocks aren't as cheap as they might seem, as they're still trading near all-time highs. Year to date, the broad-market index is still up an impressive 13.5%. There may be more bargains on the market today than there were last week, but there are also more value traps, so investors need to tread carefully.

Take a tip from some of our contributors. Keep reading to see why they like Axos Financial (NYSE:AX), Bed Bath & Beyond (NASDAQ:BBBY), and Nordstrom (NYSE:JWN). 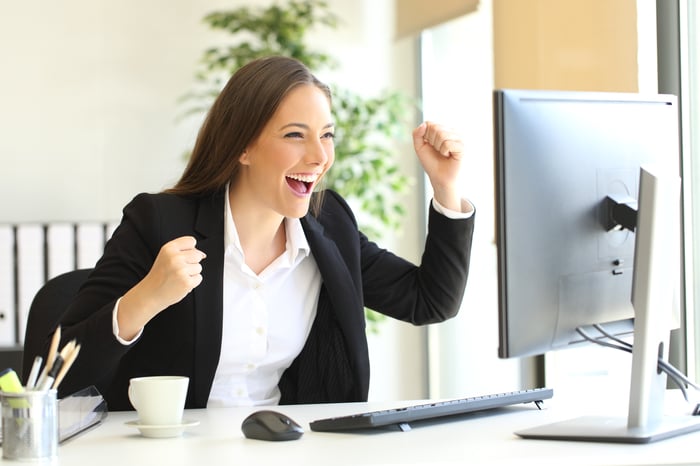 A single-digit multiple for double-digit growth

Jason Hall (Axos Financial): The market hasn't been particularly kind to bank stocks over the past year. Between economic uncertainty -- recessions are really bad for banks -- and a lack of clarity on interest rates, investors simply haven't been very willing to bid up banks like they have other industries.

Axos Financial has been one of the biggest laggards. While the S&P 500 has generated almost 10% in total returns, Axos has lost 31% of its value and significantly underperformed the market and the major bank indexes: 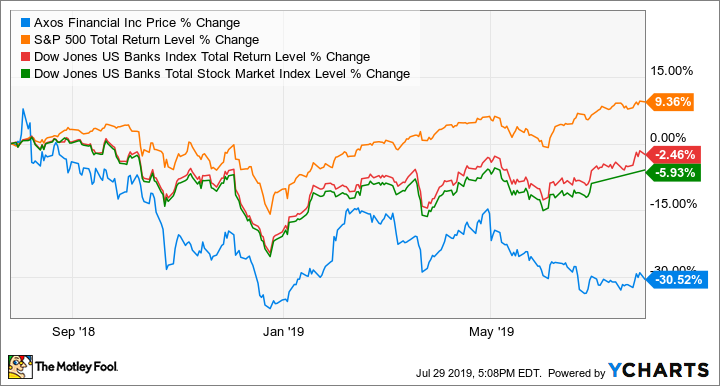 On the one hand, the beatdown has been somewhat deserving: Axos' earnings fell 24% last quarter after a recent acquisition took a big loss related to a single client. Considering how important acquisitions have been to Axos' growth over the past few years, investors weren't happy to see a recent one cause a big drop in profits.

Yet I think the sell-off is a bit overdone at this point, particularly considering the quality of Axos' assets and business, and the track record of its longtime CEO, Greg Garrabrants.

Since taking the reins right at the start of the global financial crisis, Garrabrants has steered Axos from a tiny, niche online bank focused on jumbo mortgages in Southern California to a national financial services provider with $10 billion in assets and a massive cost advantage due to its branchless model.

And while the recent debacle caused earnings to fall, Axos still grew assets nearly 10% once again, and continues to diversify across commercial and personal lending and financial services.

Yet the market is pricing it like a no-growth regional bank. Shares trade for 11 times trailing earnings, a measly 8.6 times forward earnings, and 1.6 times book value. That's dirt cheap for a high-quality bank that could very easily generate double-digit annual earnings growth over the next decade or more.

This hated retailer can turn things around

The issue for Bed Bath & Beyond is simple: It's a predominantly brick-and-mortar retailer that hasn't adapted much to a changing consumer environment. More and more, homeowners are choosing convenience and price above all else in the retail space, leading to e-commerce giants like Amazon eating Bed Bath & Beyond's lunch. Remember, Amazon doesn't have the same overhead as brick-and-mortar retailers, meaning it can undercut most on price. The result has been relatively stagnant sales for the past five years, with steadily declining operating margins and profitability for Bed Bath & Beyond.

However, I don't believe all is lost. We've witnessed big-box retailer Best Buy make a comeback, and I believe Bed Bath & Beyond, which sports a ridiculously low forward P/E ratio of 4.5, can do the same. There are three keys to long-term success, in my view.

First, the company needs to avoid the discount bug that got retailers like J.C. Penney into deep trouble. As noted in Bed Bath & Beyond's first-quarter operating results and conference call, it's reduced coupon usage, e-commerce specials, and free shipping from its digital channels. As you might imagine, such moves reduced comparable-store sales in the latest quarter, and will probably slow foot traffic into its physical locations. But this move also avoids cheapening the brand, and it emphasizes higher-quality consumers and purchases, thereby improving margins. I'd rather see the top line shrink if margins can be steadily improved.

Second, there's a defined focus on digital channel sales. Even though pulling back on free shipping hurt e-commerce sales in the first quarter, this is likely temporary. Beyond this move, we've seen relatively steady growth from digital platform channels, although these channels still represent a relatively small percentage of sales relative to physical locations. Expect the company to continue investing in its digital platforms to cater to shoppers who value convenience.

Lastly, expect some sort of restructuring plan that aims to close unprofitable locations and open smaller stores with a focus on higher-margin product, much in the way Best Buy approached its turnaround with smaller tech-focused stores.

With a three-pronged plan like this, coupled with keen cost-cutting and perhaps even a dividend reduction to preserve capital, Bed Bath & Beyond could become quite the steal.

Jeremy Bowman (Nordstrom): There's no question that Nordstrom has taken it on the chin this year. Shares of the high-end department store chain are down 35% as doubts about slowing growth, general retail challenges, and a failed bid from the founding family to take the chain private last year have combined to sink the stock. As a result, Nordstrom is now trading near 10-year lows, hovering close to $30 a share, but that's lifted the dividend yield to near 5%, sweetening the deal for prospective investors.

However, in the second half of 2019, Nordstrom has a number of positive catalysts coming down the pike that could lift the stock from its current doldrums. First, the retailer just completed its annual Anniversary Sale, its biggest event of the year. The company spent plenty of ad dollars hyping it, but we won't know how it went until the retailer reports second-quarter earnings later this month. Still, a strong performance during the key event could spark a recovery in the stock.

Later in the year, Nordstrom is set to open its new flagship women's store in New York City, which is expected to easily be its most successful location, and could bring in $300 million to $400 million in annual sales. The store's opening could also provide the brand with a halo effect, giving the company a long-absent foothold in the nation's biggest metropolis and tourist mecca, which sees millions of shoppers from around the world every year.

Finally, the Nordstrom family has reemerged as a potential bidder for the stock, likely putting a floor on the share price, and adding another angle for investor intrigue. Last year, the family offered $50 a share -- or a two-thirds premium at today's price -- to take the company private.

Add it all up and Nordstrom is a well-respected brand trading at a P/E under 10 with growth initiatives including in New York, Canada, digital, and its off-price Rack chain. In other words, it looks like a short-term mistake that the stock is this cheap.

Keep an eye on the company's earnings report later this month, as a solid report could signal its long-awaited turnaround.