Shares of enterprise-software company Box (NYSE:BOX) rose 13.2% in September, according to data from S&P Global Market Intelligence . Box managed to buck the trend in other enterprise software stocks during the month, most of which sold off hard in a big rotation out of the sector. One of the reasons could be that Box shares had already been under pressure in August, as its growth had showed some signs of slowing all year.

However, sentiment turned in early September, when Box attracted a big investment from a prominent activist investor. 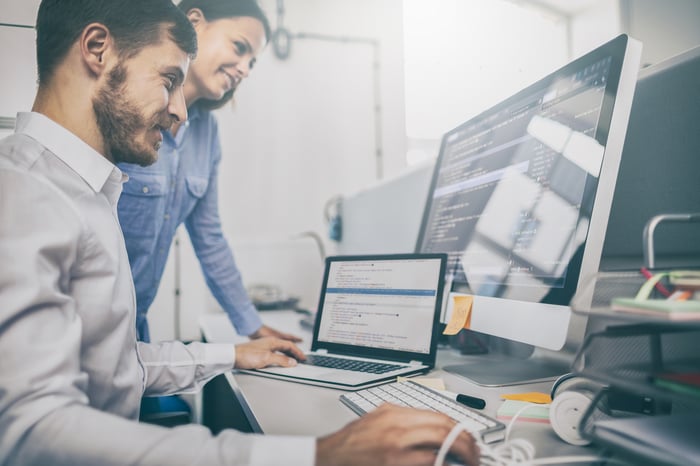 On September 3, activist investor Starboard Value disclosed a 7.5% stake in the company, sending shares up about 15% in the span of about two days. Though the disclosure only indicated that Starboard believed Box shares to be undervalued, the activist investor is known for shaking up boardrooms, agitating for board seats, and at times replacing leadership. That hasn't yet happened in Box's case and it would be strange if Starboard decided to become hostile.

Box founder and CEO Aaron Levie is known to be fairly shareholder-friendly, even doing away with the dual-class share structure back in June of 2018 that many tech companies employ to maintain an iron grip on their companies.

Nevertheless, Starboard appears to see things that could be improved, and Levie has said he will work collaboratively with Starboard going forward.

It's possible that Starboard may also agitate for a sale of the company. Shares have been under pressure for over a year as the company's new products just haven't seemed to catch on with its existing customer base. Still, Box's current offerings do seem to have value, as the company has relatively low churn of just 4.2%. That could make it an attractive piece for a larger tech company to purchase and plug into its existing offerings.

Nevertheless, investors probably shouldn't bank on a sale, but rather be on the lookout for more product innovation at the company, which can hopefully rejuvenate sales growth organically.