Please ensure Javascript is enabled for purposes of website accessibility
Log In Help Join The Motley Fool
Free Article Join Over 1 Million Premium Members And Get More In-Depth Stock Guidance and Research
By Rick Munarriz - Oct 9, 2019 at 9:15AM

China's leading search engine and Latin America's top online marketplace seem to be passing ships, but the out-of-favor stock might still be the better bet at this point.

If we were pitting Baidu (BIDU -3.25%) against MercadoLibre (MELI -2.04%) in the springtime of last year, it would be a monstrous battle of two international dot-coms seemingly at the top of their game. Baidu was China's uncontested leader in search when the stock peaked just north of $284 in May of last year. MercadoLibre was thriving as Latin America's online marketplace operator of choice when its shares hit fresh highs two months earlier.

The two stocks have gone their separate ways since then. Baidu shares have surrendered nearly two-thirds of their value, plummeting 65% since last year's high. MercadoLibre stock has gone on to beat the market, soaring 72% if we draw the starting line the day that Baidu shares hit all-time highs. It's clear which of the two stocks has momentum on its side, but let's size up the two international internet icons to see which one is the better buy right now. 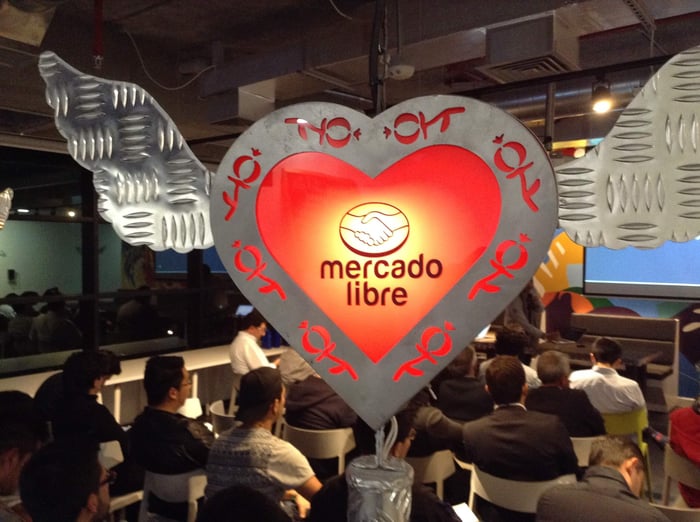 Comparing MercadoLibre to Baidu these days may seem unfair. MercadoLibre revenue soared 102% on a constant currency basis in its latest quarter, translating into a 63% top-line surge for stateside investors on a reported basis. Growth has accelerated sharply in each of the past three quarters, but Baidu is going the other way.

China's slowing economy and Baidu's own miscues have weighed on the former market darling. Revenue has decelerated in three of the past four quarters, and last time out was a doozy. Revenue from continuing operations rose 6% in its latest quarter, and Baidu's adjusted profit was cut by more than half.

MercadoLibre has its challenges in Latin America. Inflation and political unrest are par for the course, and the markets are so volatile that Argentina equities lost nearly half of their value in a single day this summer after surprising results in the country's primary polls. The difference here is that MercadoLibre has been able to overcome the hurdles.

The silver lining for Baidu is that its stock -- buckling again below triple digits on Tuesday -- hasn't been this cheap in ages when it comes to its top-line multiple. Baidu is now commanding an enterprise value that is 1.8 times its trailing revenue. MercadoLibre's fetching a hefty 13.7 times its top-line results over the past four quarters.

Analysts have been paring back their profit targets for Baidu, but the stock is still going for a reasonable 15 times next year's projected earnings. MercadoLibre is clocking in with a market cap that is 265 times next year's expected profitability.

Baidu is in a funk, and the businesses accounting for its growth these days are properties including online video and artificial intelligence that will be tricky to monetize. MercadoLibre's side gig -- online payments platform Mercado Pago -- is as popular as ever with $6.5 billion in total payment volume going through it in its most recent quarter. If you think that MercadoLibre is the obvious choice given all of Baidu's warts, you're not going to see the plot twist here.

Though both stocks should be able to beat the market at this point, I'm giving Baidu the nod here as the better buy. Latin America and China will eventually stabilize, but Baidu's the one with the sorely depressed stock price and valuation. Baidu has always bounced back in the past after sharp corrections, and the world's most populous nation will eventually get its economy back on track and get past its current U.S. trade tariff standoff. Betting on Chinese stocks isn't very popular at the moment, but Baidu shares are too cheap to ignore here.