Two years ago, Hurricane Maria tore through Puerto Rico, killing nearly 3,000 people, destroying the island's power grid, and causing massive amounts of damage. The storm also triggered a mass exodus from Puerto Rico to the U.S. mainland, due to the harsh post-storm living conditions there.

Not surprisingly, airlines dramatically slashed their Puerto Rico flight schedules as tourist demand and local demand plunged in the aftermath of the hurricane. However, this left a vacuum of sorts once demand began to recover last year. Spirit Airlines (NYSE:SAVE) has moved aggressively to fill that vacuum over the past year, challenging JetBlue Airways (NASDAQ:JBLU), the largest airline in Puerto Rico. Last week, Spirit announced plans to expand its Puerto Rico flight schedule again in the coming months.

Bulking up in Puerto Rico

Prior to Hurricane Maria, Spirit Airlines wasn't a major player in Puerto Rico, despite having a big presence in Florida (and elsewhere on the East Coast). However, it began a buildup there about a year ago, starting with the launch of a daily nonstop flight between Orlando and Aguadilla, Puerto Rico, last October. Just a month later, Spirit announced that it would roughly double its flight schedule in San Juan, adding new daily nonstop routes to Baltimore/Washington and Tampa to complement its existing routes to Fort Lauderdale and Orlando. Those flights began on Feb. 14. In January, Spirit announced another new Puerto Rico route: Philadelphia-San Juan. The budget airline began daily nonstop service on that route on May 23.

Last week, Spirit Airlines announced a further round of growth in San Juan. New daily nonstop service from Boston and Newark to San Juan will start on Dec. 19. The carrier also plans to add a second daily flight on the Philadelphia-San Juan route next March. Finally, Spirit Airlines now offers two daily flights on its Fort Lauderdale-San Juan and Orlando-San Juan routes on most days of the week, particularly during the winter season.

Hitting at a point of strength for JetBlue

In recent years, JetBlue Airways has been the biggest airline in Puerto Rico, with dozens of flights each day. Puerto Rico is generally a very profitable market for JetBlue, due to the carrier's leading position there, but results have been quite volatile recently. JetBlue's business in Puerto Rico got hit hard by Hurricane Maria but began to recover rapidly in 2018. As recently as April, JetBlue executives stated that the "Puerto Rico recovery continues to exceed our expectations."

However, JetBlue encountered another setback in Puerto Rico last quarter, possibly due to the protests that rocked the island this summer and ultimately led to the resignation of Puerto Rico's governor. Last month, the airline cut its Q3 unit revenue guidance, with weaker bookings to Puerto Rico representing the biggest headwind in the quarter. 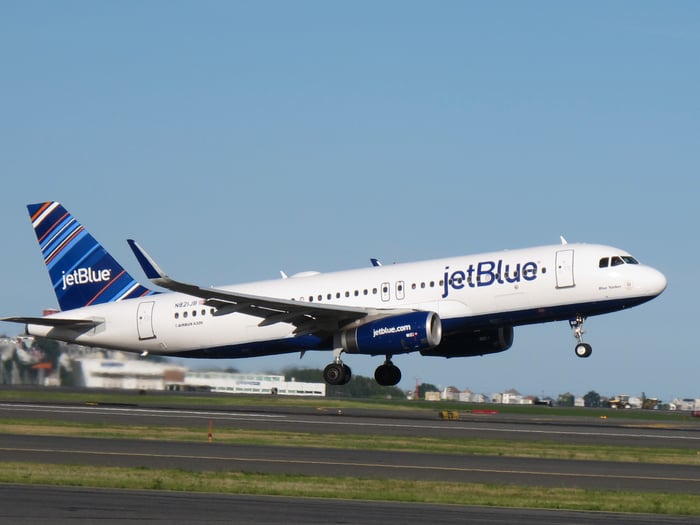 JetBlue flies to San Juan from both Newark and Boston. It competes with United Airlines on the Newark route and was already set to face new competition this winter, as Frontier Airlines will begin daily Newark-San Juan service in mid-November. The addition of Spirit Airlines flights on that route in December will lead to a significantly more competitive fare environment. Meanwhile, JetBlue currently enjoys a monopoly on nonstop Boston-San Juan flights. Spirit's entry into that market will likely reduce JetBlue's pricing power.

On the other hand, JetBlue doesn't offer nonstop flights between San Juan and Philadelphia. Spirit's competitors on that route are fellow budget airline Frontier Airlines, as well as American Airlines.

All else equal, Spirit Airlines' growth in Puerto Rico will likely reduce JetBlue's unit revenue on routes where the two airlines will be competing. Nevertheless, there's plenty of room for both airlines to be successful in this market.

Spirit Airlines and JetBlue maintain distinct customer value propositions. Spirit has lower fares, enabling it to stimulate demand from customers who couldn't afford to travel otherwise. Given that the average household income in Puerto Rico is much lower than in the continental U.S., there should be ample opportunity for demand stimulation (particularly in the "visiting friends and relatives" market segment). The trade-off is that Spirit has a barebones inflight experience and charges fees for many items that are included in most airlines' base fares.

By contrast, JetBlue offers industry-leading legroom, unlimited free snacks and drinks, free TV, free Wi-Fi, and other amenities. Furthermore, it will introduce its version of "basic economy" pricing later this year, making it easier to match Spirit's low fares without hurting unit revenue too much.

Thus, there may be some short-term headwinds as the Puerto Rico travel market adjusts to increased capacity, but in the long run, JetBlue and Spirit Airlines should be able to coexist there quite profitably.