Please ensure Javascript is enabled for purposes of website accessibility
Log In Help Join The Motley Fool
Free Article Join Over 1 Million Premium Members And Get More In-Depth Stock Guidance and Research
By Demitri Kalogeropoulos – Feb 2, 2020 at 9:01AM

The beverage giant posted its fastest growth rate in years as it closed out fiscal 2019.

Investors saw encouraging signs of gathering momentum in Coca-Cola's (KO -2.15%) business in 2019. The beverage titan had raised its fiscal year outlook in two consecutive quarters, after all, despite some spotty demand in parts of its global portfolio.

But it turns out that the company had even better news in store for shareholders. This week, Coke announced fiscal fourth-quarter results that ended its year on a high note. The drink giant also predicted a return to robust profit growth in 2020.

Let's take a closer look at the Q4 report. 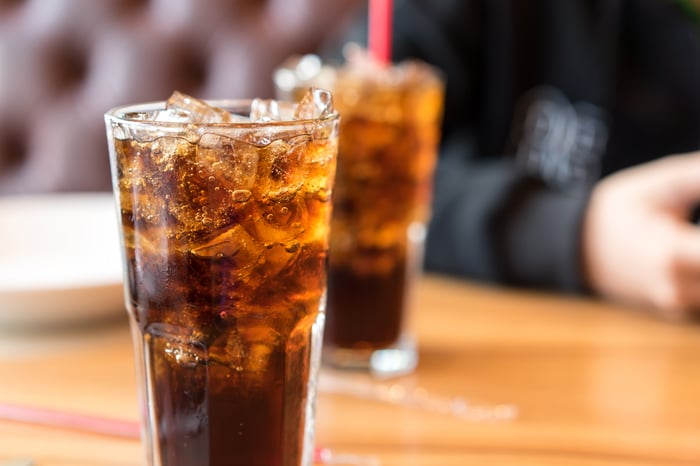 Coming into Thursday's report, Coke had lifted its core growth outlook on two consecutive occasions so that organic sales were predicted to rise 5% for the year. That compares well to the 4% that CEO James Quincey and his team initially targeted, and to the 3% increase that rival PepsiCo (PEP -1.93%) has been posting.

Coke's actual fourth-quarter results outpaced expectations, though, with a 7% sales spike powering 6% gains for the full year. Executives noted in a press release that the revenue growth marked the best market-share performance in nearly a decade, mainly thanks to popular product launches like Coke Zero Sugar. "We continue to transform the organization to act with a growth mindset," Quincy said.

On the downside, the company had to rely mainly on increased prices and the shift toward smaller serving sizes rather than higher volume. Concentrate volumes rose by just 1% for the full year, while the combination of price boosts and demand shifts delivered the remaining 5% organic sales increase.

Currency exchange moves kept a lid on reported earnings, which inched higher by just 1%. Yet looking beneath that metric reveals lots of financial strength for this blue chip business.

Coke managed a significant boost in operating margin that allowed operating income to rise 13% for the year. Cash flow was even more impressive, with operating cash jumping to $10.5 billion from $7.6 billion. These wins let Coke easily achieve the objectives it laid out a year ago. "We made good progress in 2019 by delivering on our financial commitments," Quincy explained.

Coke's initial 2020 outlook is conservative, predicting organic growth of 5% to mark a slight slowdown from the past year's boost. The consumer staples giant's other financial targets suggest a similar year to the one that just closed, too, with operating cash landing at around $10 billion. Earnings growth will be more substantial at 7%, executives forecast.

Looking ahead, investors will be eager to see if the positive sales momentum from the past few months carries over into early 2020 and sparks more guidance upgrades. On the financial side, look for Coke to potentially scale up its stock repurchase spending now that its dividend is more comfortably covered by its robust cash flow trends.