The research suggests a route to a whole new class of treatments for the common disease.

New research from the Icahn School of Medicine at Mount Sinai in New York has found that treatment with a combination of two different types of drugs can help restore insulin production in people with diabetes.

Diabetes is a condition in which the pancreas is unable to produce enough insulin to properly regulate the sugar in a person's bloodstream (or to produce any). As a result, patients must either take insulin injections or other drugs to manage the condition.

However, the Icahn scientists have found that a combination of DYRK1A inhibitors and GLP-1 receptor agonists induces the pancreas's insulin-producing beta cells to regenerate at a remarkable rate. In human cell samples, the combination resulted in a 40% average increase in the number of functioning human beta cells. After successfully testing this in tissue samples and mice, the researchers believe that this discovery could lead to a new class of diabetes treatments. 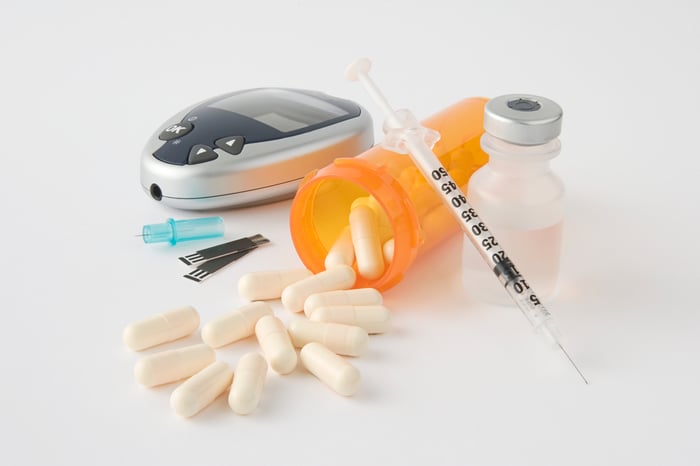 "We are very excited about this new drug combination because for the first time ever, we are able to see rates of human beta cell replication that are sufficient to replenish beta cell mass in humans with diabetes," said Dr. Andrew Stewart, the study's lead author.

Most prescribed diabetes medications are classified as GLP-1 receptor antagonists, which work by stimulating the insulin production of a person's remaining healthy beta cells. These include drugs such as Eli Lilly's Trulicity, AstraZeneca's Bydureon, and Novo Nordisk's Victoza.

Other biotech companies, such as Semma Therapeutics, have been working on turning human stem cells into functioning insulin-producing cells. Semma was acquired by Vertex Pharmaceuticals in September.