The robotic surgery leader is facing potential headwinds but should continue making progress in 2020.

Intuitive Surgical (ISRG 0.32%) reported solid, if not unspectacular compared to medical technology peers, earnings and revenue growth for the fourth quarter and year on Jan. 23. While investors should pay close attention to future studies on the efficacy of robotic surgery, Intuitive is likely to keep producing good numbers this year.

The company is the leading manufacturer and servicer in the robotic surgery field. Despite its consistent sales growth and gains in procedure growth, a lack of consensus on the effectiveness of robotic surgery compared to conventional surgeries poses a risk to this growth stock.

What is robotic surgery?

Minimally invasive surgery, or laparoscopic surgery, has become more popular over the last few decades as it has proven to be as effective, if not more so, than open surgery. It's generally understood that using a robotic surgery system results in fewer complications, shorter recovery times, reduced costs, and better outcomes. This type of surgery is done via small incisions in the body through which tubes enter. Instruments and cameras are passed through the tubes while a surgeon uses the instruments to perform surgery while viewing transmitted images on a video monitor. 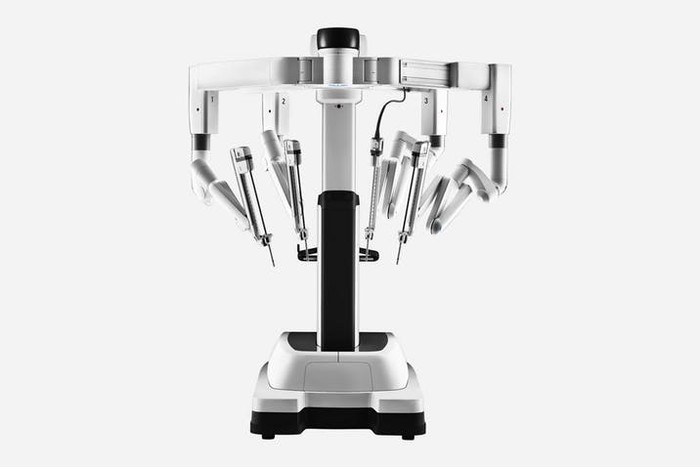 Robotic surgery is a type of minimally invasive surgery. Intuitive Surgical produces the da Vinci system, which consists of a console and a movable platform with robotic arms. A surgeon sits at the console and views a high-definition 3D image of the surgical area. Intuitive Surgical's EndoWrist device is attached to the surgeon's wrist, which allows the robotic arms to mimic a human wrist. The surgeon can control the movable platform and robotic arms to perform the surgery.

The big selling point for these machines is the idea that the surgery is more precise than conventional laparoscopy, resulting in fewer complications for patients.

The da Vinci systems range in price from $0.5 million to $2.5 million and carry recurring costs such as service contracts, and replaceable instrument and accessory costs. Leasing arrangements are growing in popularity, as 126 units shipped under operating lease agreements in the fourth quarter of 2019 compared to 84 in the fourth quarter of 2018. The company believes that its leasing program allows for faster market adoption.

In its most recent earnings report, Intuitive Surgical yielded impressive results. In 2019, the company's total revenue rose 20% and net income per share rose over 20%, continuing several years of solid performance. The stock, which grew 23.4% in 2019, lagged behind the growth of the S&P 500, which saw 29% growth over the year.

In addition, the market for robotic surgery is expected to grow over the coming years. One report pegged the global robotic surgery market at $56 billion in 2017 and predicted it will grow to $99 billion by 2024.

However, there are some problems investors should keep an eye on.

Efficacy is still a big concern

The robotic surgery industry looks to remain viable for the future, but there are concerns the benefits touted in its marketing are exaggerated. There are no significant studies that show robotic surgery is superior to laparoscopy.

Intuitive's stock shed about 5% from the start of 2018 until March, when it rebounded, showing that the market is not too concerned with individual studies showing traditional laparoscopy as more effective than robotic surgery. There is far from a consensus on the issue, and until one develops, Intuitive should continue to grow.

Cost is another question mark

On top of concerns about efficacy, there is a developing consensus that robotic surgery is costlier than conventional laparoscopy or open surgery. As healthcare shifts from an industry that pays on volume to one that is increasingly taking value into consideration, robotic surgery will have to find a way to cut costs if it is going to become a major player in the healthcare market.

Intuitive's leasing of its systems has helped to address this concern. Patients increasingly demand robotic surgery. For hospitals and clinics, the leasing arrangements -- which accounted for 33% of Intuitive's total placements for the fourth quarter -- make it much easier and much more likely institutions can meet that demand.

Intuitive will continue to grow

Intuitive has seen and will continue to see growth in the coming year. It is the leading player in a fast-growing market with a product that patients increasingly demand. While investors should keep a watchful eye out for news about the efficacy of robotic surgery, a consensus is unlikely to develop one way or another on the issue anytime soon.

Investors should expect Intuitive to be trading around $630 by the time of the next earnings release in late April, which would represent a nearly 3% increase from today's price.