Please ensure Javascript is enabled for purposes of website accessibility
Log In Help Join The Motley Fool
Free Article Join Over 1 Million Premium Members And Get More In-Depth Stock Guidance and Research
By Dan Caplinger – Feb 21, 2020 at 10:20AM

The spread of the COVID-19 virus brought new worries for investors.

Wall Street saw stocks move lower Friday morning as market participants reacted to the latest news about the COVID-19 outbreak. With a rising number of new cases now appearing in South Korea, many medical experts are concerned that efforts to contain the disease might not prove as effective as originally hoped. Investors sought refuge in safe-haven plays like bonds and gold. As of 11 a.m. EST, the Dow Jones Industrial Average (^DJI) was down 243 points to 28,977. The S&P 500 (^GSPC -1.02%) fell 29 points to 3,344, and the Nasdaq Composite (^IXIC) was off 115 points to 9,636.

Deere gets help from the farm

Shares of Deere were up 8% after the heavy equipment manufacturer reported its fiscal first-quarter financial results. Despite a mixed performance, investors were generally pleased with how well the company held up under tough conditions. 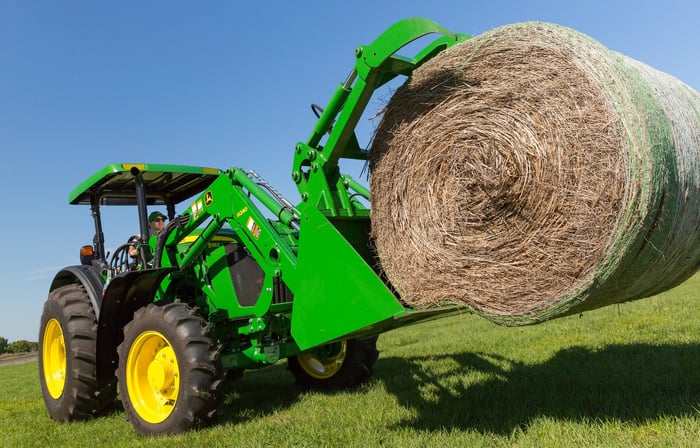 Deere's revenue for the period was down 4% year over year, with a 6% drop in sales from equipment operations leading the way lower. Yet net income climbed almost 4% from the previous year's period, and that was far better than the steep decline that many investors had expected.

More importantly for the future, Deere saw some improvement in conditions in the hard-hit farm sector. Past trade tensions between the U.S. and China had a huge negative impact on farmers, and so the phase 1 agreement and other signs of reconciliation have boosted confidence somewhat.

Deere's outlook forecast more challenges ahead, including projected 5% to 10% declines in sales of agriculture and turf equipment and 10% to 15% drops in construction and forestry equipment revenue. But with some seeing potential signs of a bottom for the heavy equipment industry coming soon, Deere shareholders are celebrating early.

Many companies would drool over the revenue growth that Zscaler was able to post. Overall revenue rose 36% year over year, with an 18% rise in billings and a 36% jump in deferred revenue. Adjusted net income inched higher by about 4% as well.

However, investors weren't entirely satisfied with Zscaler's projections for the near future. Fiscal Q3 revenue of between $105 million and $107 million would be only slightly higher than Q2's sales, and adjusted earnings projections of $0.01 to $0.03 per share next quarter and $0.14 to $0.16 per share for the full 2020 fiscal year didn't give investors the growth trajectory they'd hoped to see.

This isn't the first time that Zscaler has had difficulty matching up to the high expectations of shareholders. With investors getting pickier about making sure that the high-growth companies they follow look likely to sustain that growth well into the future, it'll be up to Zscaler to prove to its shareholders that it has what it takes to succeed in the long run.

3 Ingredients That Make Up Deere's Secret Sauce for Growth

Where Will Deere Be in 10 Years?

Is Deere Stock a Buy?