Shares of Biogen (BIIB 3.28%) rose 14.7% in February, according to data provided by S&P Global Market Intelligence, after the company won a patent ruling concerning its blockbuster multiple sclerosis drug.

In a case brought by generic-drug maker Mylan (MYL), the U.S. Patent and Trademark Office's patent trial and appeal board ruled in Biogen's favor. That means Biogen's Tecfidera won't face competition until patent expiration in 2028 -- unless a Mylan appeal or other separate patent challenges result in a different decision. 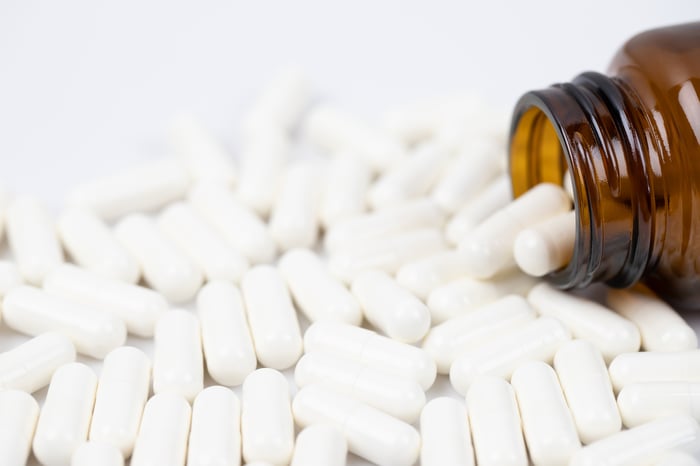 In the fourth quarter, Tecfidera accounted for 40% of Biogen's product revenues, so news upholding its patent, and therefore blocking generic competition, is positive. This gives Biogen time to ramp up sales of its new MS drug, Vumerity, in the coming quarters. A fumarate drug like Tecfidera, Vumerity offers the same efficacy with fewer side effects.

Now the task facing Biogen is transferring patients from Tecfidera to Vumerity. The U.S. Food and Drug Administration approved Vumerity in October, and the drug generated $5 million in its first quarter on the market. So, it has a way to go before it can compensate for declines in Tecfidera once patent protection is lost. Investors will be watching the progression of Vumerity sales in the coming quarters and should monitor news from other patent cases involving Tecfidera. Another case with Mylan is currently unfolding in West Virginia.

An even bigger catalyst for Biogen in the coming months will likely be news linked to aducanumab, the investigational Alzheimer's treatment the company revived in the fall after ending the program earlier in the year. New data boosted optimism about the drug's efficacy, and the biotech company said it would submit aducanumab to the FDA for review early this year.

Biogen's shares have given up some of the February gain and are now up 6.4% so far this year. But any further good news on the Tecfidera patent, progress in Vumerity sales, and optimism about the company's Alzheimer's treatment may send the biotech stock higher.