It was another bad news day for the oil services company.

On Monday, Moody's dropped Oceaneerings' Corporate Family Rating by two notches from Ba2 to B1. While Ba2 is already within the sub-prime debt category -- a gentler way of saying junk bond status -- a B1 rating indicates substantial risk. What's more, this is for all of Oceaneering's $1.3 billion in unsecured debt, not just a single note. 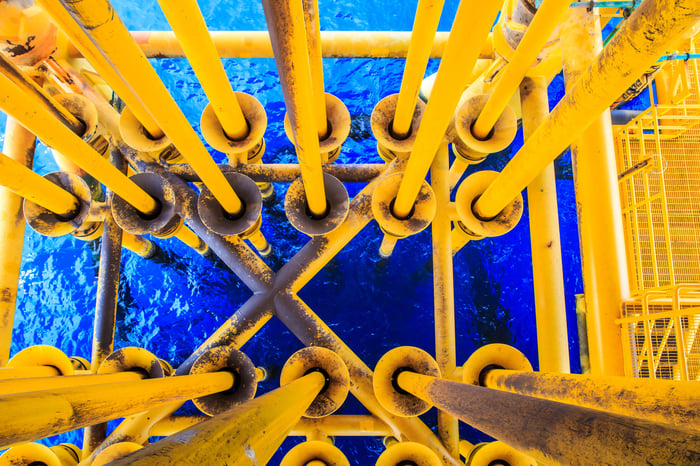 The only good thing that came out of that report was that Moody's revised its outlook on the company upward from negative to stable, citing Oceaneering's "leading market position, strong liquidity and our expectation that the company will continue to manage its capital expenditures within operating cash flow."

Oceaneering has stated that its capital spending for all of 2020 will be in the range of $75 million to $105 million. It brought in $158 million in cash in 2019, and it has $374 million in cash on the books. That should allow it to fund any short term needs.

There's no beating around the bush here: It's looking rough for oil and gas companies. The industry is reeling from the impacts of OPEC suspending production quotas and Russia increasing its output, combined with the steep decrease in demand due to the novel coronavirus pandemic. There is too much oil being produced and not enough room to store the excess. That is going to take a toll on all involved, even oil service companies like Oceaneering.

The silver lining for Oceaneering is that the offshore drillers who make up its clientele can't just stop using some of the services it provides, no matter how low the price of crude goes.

Its remotely operated submersible vehicles serve critical functions -- monitoring and evaluating the condition of subsea equipment, for example. That kind of work will likely continue. Also, as Moody's points out, the company's balance sheet is in relatively good shape. It doesn't have any debt due before 2024, it has a decent amount of cash on the books, and its business is nowhere near as capital intensive as other parts of the oil and gas industry. There's a good chance that a lot of companies will go bankrupt during this oil industry catastrophe, but Oceaneering is one of the less likely candidates.

That doesn't necessarily make Oceaneering's stock too appealing right now, though. It will be some time before the glut of oil in the system is cleared, and chances are, the situation in this part of the energy sector could get a lot worse before it gets better. So while Oceaneering is on the shortlist of companies well-positioned to survive this downturn, that doesn't necessarily make it a stock that investors should be running to buy today.