Please ensure Javascript is enabled for purposes of website accessibility
Log In Help Join The Motley Fool
Free Article Join Over 1 Million Premium Members And Get More In-Depth Stock Guidance and Research
By Rich Duprey – Apr 2, 2020 at 11:30AM

The coronavirus pandemic reveals new considerations for investors before buying a stock.

The coronavirus pandemic has exposed that it's not nearly enough for retirees to simply invest in dividend-paying stocks, since many businesses have been forced to suspend their payouts to preserve liquidity.

While the businesses may have looked solid beforehand, their nonessential nature reveals them to be just as vulnerable as other less financially stable stocks. It means investors who've already retired (or are about to) have another layer of consideration. And it shows why the three companies below ought to be considered a key addition to your portfolio. 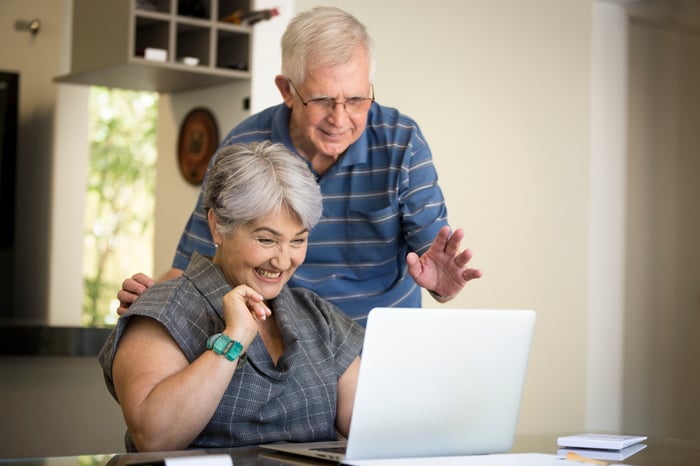 Amazon.com (AMZN -3.01%) has become a lifeline to many because the whole of physical retail has been virtually closed off. The only way some people can get any supplies is online. And the e-commerce giant's breadth and depth of products, along with its network of third-party retailers, have ensured that most goods remain available.

Yet it's not just merchandise that's made Amazon a crucial part of our lives, but also the availability of entertainment through its Prime Video library that helps make the shelter-in-place orders bearable. While video consumers have more choices than ever these day from streaming services, Amazon Prime Video is a valuable option for its loyalty program members.

What may be most vital, however, is Amazon Web Services, the company's cloud services division, which serves as the backbone not just for other retailers that have been forced to rely upon e-commerce to survive during this time, but for the government as well. It is Amazon's most profitable business, so it will sustain it through good times and bad, and it is growing faster than its retail segment, meaning it is just as crucial, if not more so, than much of the rest of its business.

Beyond being declared an essential business by the government during the pandemic, which allows Home Depot (HD 0.67%) to remain open when other retailers must close, the DIY center's business has become vital to homeowners regardless of the housing market.

In boom times it is able to supply professional contractors with the material they need to feed the growth, while during downturns it helps homeowners maintain their houses whether through a remodel or just a fresh coat of paint.

More importantly, its $11 billion One Home Depot strategy integrates its digital capabilities with its physical footprint. While it may have been a little too enthusiastic in its predictions about how soon the benefits would accrue to its operations, it remains on track to earn the rewards from its investments.

The home improvement warehouse also gives retirees a reliable dividend payment that is not at risk of being suspended even in these extreme times. The payout of $6 per share currently yields north of 3% annually, and with its business only mildly at risk of disruption (think of it as sales delayed rather than forgone), it will be a solid performer in the future.

Walmart (WMT -2.50%) continues to shine during the pandemic, not only because it is also defined as an essential business, but also because its stores both online and off have been the primary food and goods center for millions of Americans.

While many consumers view its everyday low-price policy as vital even during good times, Walmart's ability to remain open and draw on its vast supplier network to remain in stock on food and merchandise is without parallel. And though certain goods remain hard to come by, Walmart's assurance that almost all other goods remain plentiful and readily available may have single-handedly curbed the worst excesses of the panic buying that marked the early days of the pandemic.

Furthermore, the retailer has also done right by its employees, providing them extra pay during the crisis, giving them a bonus for the extra work they've put in, and ensuring they will be provided for if they get COVID-19.

There has been little for even its harshest critics to attack it on, and when this emergency has passed (as it will), the goodwill the retail king has generated -- like by hiring hundreds of thousands of workers laid off elsewhere -- will continue to serve it in good stead.

It also pays investors a dividend that's yielding 2%, and because its business has thrived during this period, it will be one of only a handful of companies that will be able to report growth. At just 20 times analyst earnings projections and a fraction of its sales, Walmart is both a cheap stock and a vital one.