Please ensure Javascript is enabled for purposes of website accessibility
Log In Help Join The Motley Fool
Free Article Join Over 1 Million Premium Members And Get More In-Depth Stock Guidance and Research
By Will Healy – Apr 15, 2020 at 8:50AM

The answer probably lies in its ability to "multi-define" itself.

Boston Beer (SAM -2.57%) has fared well amid a generalized market sell-off created by the coronavirus pandemic. While the S&P 500 is still off by more than 16% from its peak in mid-February, Boston Beer stock has almost returned to its near-term peak established on Feb. 19.

Other consumer staples stocks have also seen smaller-than-average declines or outright gains as the overall market fell. Moreover, previous sales patterns for beverages could return to pre-COVID-19 levels once governments lift the lockdown and life begins returning to normal.

Although investors might be seeing a buying opportunity in Boston Beer stock at the moment, they should assess this company's investment worthiness based on the sales growth and consumption trends that were present before the rise of coronavirus skewed things.

Coronavirus brings pain along with a reprieve

The last few years have met with struggle and adaptation for Boston Beer. Shifting consumer tastes have hurt beer producers across the board. Some consumers shifted to other beverages, or away from alcohol altogether. An increasing desire to avoid carbs and calories also weighed on beer sales. Though craft beers saw a more modest sales decline, the company's flagship Samuel Adams brand did not escape those effects. 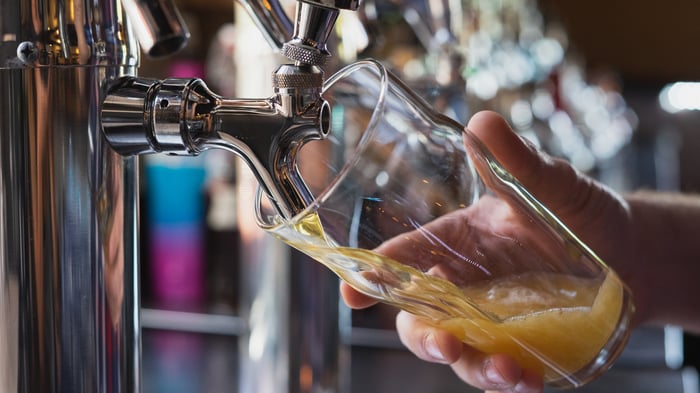 Boston Beer recognized this trend and wisely "multi-defined" itself and expanded its offerings. It effectively became the craft beer company that does not necessarily define itself as just a beer brewer. In recent years, Truly Hard Seltzer has led the way in bringing continued revenue growth for the company. In 2019, both its Truly and Dogfish Head brands drove revenue increases. This offset declining sales in the company's Samuel Adams and Angry Orchard lines.

Moreover, despite sales trends, old perceptions of Boston Beer as a "craft brewer" remain. Consumers tend to view Samuel Adams and Dogfish Head as "craft beers," even though the company may arguably have outgrown this description. With 5.3 million barrels of annual production and the company stock trading on a major exchange, Boston Beer substantially outproduces most of its craft beer counterparts. Nonetheless, few consumers associate Samuel Adams with national breweries such as Anheuser-Busch InBev's (BUD -0.62%) Budweiser or the popular Coors and Miller lines produced by Molson Coors (TAP -0.37%).

This helps in one critical way. Amid the coronavirus crisis, an affinity for craft beers has returned even as sales in bars and restaurants plummet. This helps put Boston Beer in a sweet spot despite the danger that it will lose its craft brewer status.

The company's "craft" status may also help the stock itself. At a forward P/E ratio of around 33.9, Boston Beer stock may appear pricey. However, the popularity of hard seltzer and a resurgence in Samuel Adams beer could justify the multiple. Analysts now forecast average earnings increases of almost 24.1% per year over the next five years.

Conversely, Molson Coors matches Boston Beer more closely in size. Its market cap of approximately $9.75 billion is only about twice the size of Boston Beer's market cap of about $4.7 billion. However, Molson Coors' forward P/E of 11.5 may not attract investors as analysts forecast that profit will shrink by an average of 5.17% per year over the next five years. 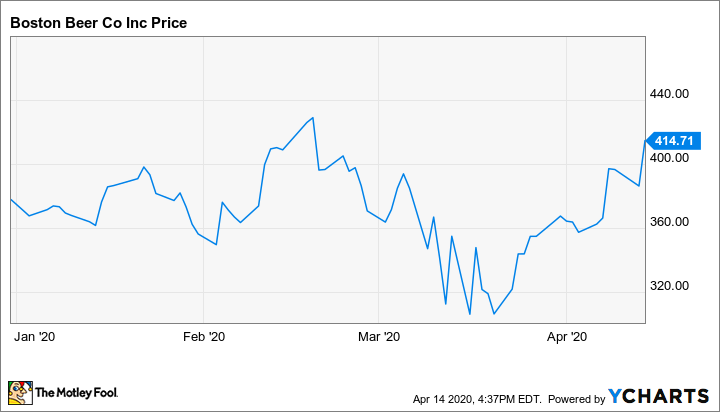 Boston Beer is a buy, but not so much because of COVID-19

Fortunately, the company's current multiple has not moved far beyond the considerable profit growth rate for this beverage giant. Also, as mentioned before, Boston Beer appears able to define its image as a seltzer company or a craft brewery when either perception will help to boost sales. For these reasons, Boston Beer looks like a buy; it's just not as good of a bargain as it was in mid-March.