Please ensure Javascript is enabled for purposes of website accessibility
Log In Help Join The Motley Fool
Free Article Join Over 1 Million Premium Members And Get More In-Depth Stock Guidance and Research
By Rick Munarriz – Apr 17, 2020 at 8:15AM

A cult fave restaurant chain, a fast-growing maker of eccentric furnishings, and one of this year's hottest stocks are the right places for your next investment.

With stimulus checks starting to trickle in and the markets in flux, there's a good chance that you might have a little money to invest -- and a lot of time on your hands to make sure you get it right. Let's go over some of the consumer stocks that I feel can make a $1,000 investment grow at a market-thumping rate.

Chipotle Mexican Grill (CMG -1.07%), Lovesac (LOVE -2.13%), and Zoom Video (ZM -0.03%) are three stocks that I think will deliver outsize gains in the months, and more importantly years, to come. They're three stocks that are priced right for your potential $1,000 investment right now. 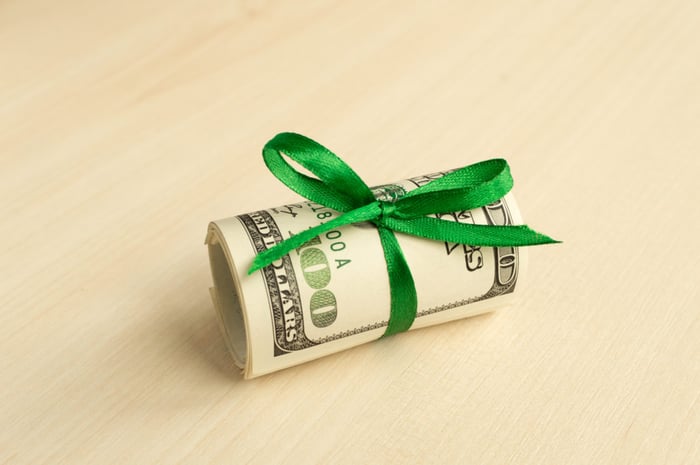 There was a lot to like about the burrito roller before the coronavirus crisis crushed the restaurant industry. Chipotle had posted eight straight quarters of accelerating comps, culminating in a scintillating 13.4% pop in same-store sales in the fourth quarter of last year.

The key to Chipotle's turnaround, which coincided perfectly with the arrival of former Taco Bell chief Brian Niccol in early 2018, was a big digital push. Chipotle has improved its mobile app platform, partnered with third-party delivery platforms, and started to build drive-thru lanes at many of its newer locations. The end result is that digital sales -- up 78% over the past year -- are now accounting for 19% of the chain's total sales.

This is perfect timing for Chipotle, as mobile ordering and third-party food-hailing apps are pretty much the only way that most chains can drum up sales in this new normal. Chipotle should hold up better than most concepts during this industry downturn, and the shakeout will only make it that much easier to stand out as a cult fave.

The stock closed on Thursday at $786.75, which means that you'll be buying a single share with your $1,000 -- and probably a little more if your broker allows you to trade in fractional shares -- but it's a good call. Don't let the large number scare you. Some investors probably felt that way when Niccol arrived in February 2018 as the stock sat just below $250, but the four shares you could've bought then would be sitting pretty right now.

Let's pivot to a stock with a small price, but one that's starting to make a move. The maker of luxury bean-bag chairs and modular sectional sofas was one of Thursday's biggest winners, soaring 27% after posting blowout financial results.

Net sales rose 44% for the fiscal fourth quarter that ended on Feb. 2, lifting the top line 41% for the entire fiscal year. It had to shutter its showrooms in mid-March in response to the COVID-19 virus, but in the process, its e-commerce channel remains strong. Its supply chain situation is also in better shape than it was just a few months ago.

Lovesac's better-than-expected results will be tested in the current operating climate without physical stores and consumers likely strapped for cash, but one market segment that should be a relative winner in this downturn is home furniture. Lovesac's oversized bean bags and adaptable sectionals should prove popular with consumers hunkering down for the coming weeks, if not months. The stock is trading in the single digits, so that $1,000 will buy you a healthy number of shares if that was a reason for you holding back on Chipotle.

Let's close with a company that was an enterprise platform when the year began but is now a runaway leader as a consumer service today. Zoom Video's online videoconferencing platform has become the gateway of choice for schools, performers, and businesses with employees working from home.

Zoom has seen its usage explode from 10 million people a day in Zoom meetings at the end of December to more than 200 million daily virtual meeting attendees three months later. It's been quite the learning curve for Zoom, particularly in the area of privacy and security -- factors that weren't a big deal a few months ago, since businesses tend to bring their own safeguards into the mix. Analysts see revenue growth of 50% this year and 35% come 2021, but that seems low, given how quickly Zoom has bean able to weave itself into our daily schedules.

Your $1,000 can only buy a half-dozen shares of Zoom, given its triple-digit share price, but you're better off owning a couple of shares of a growing company than a lot of stock in a laggard. These are the top stocks for making your grand seem even more grand.