No one was surprised to see Disney's (NYSE:DIS) revenue take a plunge in the fiscal 2020 third quarter. Details of its theme park closures and openings have been very public, as is the fact that the parks segment has historically been one of the biggest revenue drivers for the company.

Long-term, Disney is well-positioned with its other revenue streams picking up part of the slack, and parks are finally beginning to reopen. The big question is how fast operations can return to normal. Since the company has provided a window into what's happening inside, let's see if we can envision where Disney will be in a year from now.

Disney's global theme parks and other experiences -- resorts, cruise lines, and more -- completely closed their doors for a significant portion of the company's fiscal third quarter, which ended June 27. That segment took in 85% less revenue than it did in the prior-year period, although it did better than other theme park operators due to staggered openings of its international properties. While the parks are still way below full capacity, the company gave a hopeful update that the segment as a whole is making a "positive net contribution," meaning it's making more money than it's currently spending. 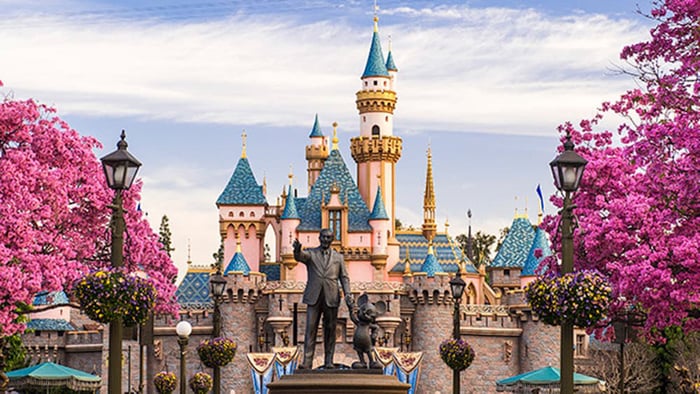 While it would be nice for investors to see metrics from that segment improve going forward, the chance still exists that parks could be forced to close again. Florida is still dealing with a surge in coronavirus cases, which makes the prospects for Disney World's near future uncertain. The company recently announced that starting Sept. 8, Disney World will operate at reduced hours, and other changes may be in the making. What's more, products are part of that segment, and management in any case sees a challenge to meet last year's fourth-quarter product numbers, which included the launch of the most recent Star Wars film as well as Frozen II. So while the fiscal fourth quarter may show some significant quarter-over-quarter gains, it's not likely to surpass the prior year.

The major positive development for Disney in the latest quarter was its streaming services, which became a lifeline for the company as people stayed home and signed up for home entertainment in record numbers. As the streaming services expand, Disney will lock in greater revenue. That won't necessarily beef up the bottom line, as Disney's still investing in the launch of Disney+ in markets around the world. The company has shown itself to be strong competition for Netflix as it gained over 60 million Disney+ subscribers since its launch in late 2019 and more than 100 million total streaming subscribers, versus Netflix's 192 million, which it achieved after more than a decade. Although Disney declined to provide an outlook, management noted that the Disney+ launch has far exceeded expectations, and the company sees continued growth in that business.

Even beyond the subscriber base, there are new opportunities in streaming with Disney's straight-to-streaming movie initiative. The company is charging $29.99 for Mulan, which it's planning to release on Sept. 4th through Disney+, and other features, such as Hamilton, are being launched on the streaming service as well.

CEO Bob Chapek emphasized that the company is going to focus on direct-to-consumer in the coming months where the company sees a wide-open space. It's launching a new direct-to-consumer streaming service under the Star brand, which is already active in India, in addition to Disney+, Hulu, and ESPN+, backed up by the creative energies of its studios.

Disney can be stronger a year from now assuming it sustains streaming subscriber growth, major sports resume their seasons, films go back into production, and park attendance recovers. But parks and experiences will likely still be at lower levels than before the pandemic, a trend that will continue until a vaccine is discovered or the threat of COVID-19 somehow passes.

The stock will remain volatile until that point as well, but at its current depressed levels, investors have an opportunity to stock up on shares before the company regains its footing.

Where Will Disney Be in 1 Year? @themotleyfool #stocks $DIS $NFLX Next Article
Current