Apple is coming under increasing pressure over its App Store fees, and Caterpillar is still seeing double-digit sales declines.

The Dow Jones Industrial Average (^DJI 0.61%) had eked out a 0.1% gain by 1:10 p.m. EDT Friday. Progress on a new stimulus bill has hit a wall, with Congress in recess and no talks scheduled with White House negotiators. Meanwhile, U.S. retail sales in July rose less than expected as cases of COVID-19 surged throughout the country.

Shares of Apple (AAPL 1.48%) and Caterpillar (CAT 1.42%) were down modestly on Friday, working against the Dow. Apple was sued by Epic Games after the tech giant removed Fortnite from its App Store, and Caterpillar reported another month of tumbling retail sales. 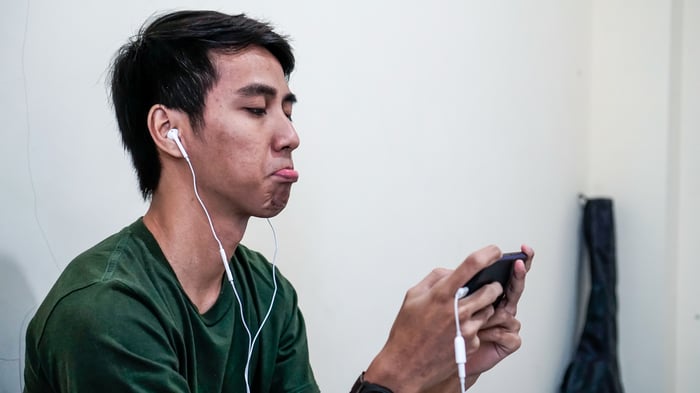 On Thursday, both Apple and Alphabet's Google removed the popular video game Fortnite from their respective app stores after Epic Games gave users a way to buy items in the game while skirting app store fees. Both companies charge fees as high as 30% for purchases made through their app stores.

Epic Games quickly filed a lawsuit in a California district court against Apple, calling the company's App Store practices anti-competitive. Epic said that it would provide a competing app store on Apple devices if not for Apple's policies. The gaming company also filed a separate complaint against Google.

Other companies have complained about Apple's App Store fees in the past. Most notably, music streaming giant Spotify previously filed an antitrust complaint in Europe over the fees.

The App Store is a key component of Apple's services business, which is one of its main growth drivers. If the rebellion against its fees eventually leads antitrust regulators to act, Apple could see a high-margin source of revenue disappear, or at least be greatly diminished.

Shares of Apple were down around 0.35% by early Friday afternoon. With Epic escalating its battle against Apple's fees, the stock's historically high valuation just got a bit harder to justify.

Rolling 3-month retail sales for heavy machinery manufacturer Caterpillar tumbled 20% in July. That's a bit better than the 23% decline reported for June and May.

Caterpillar reported a 31% sales decline for the second quarter, driven by weak end-user demand as well as dealers reducing inventories. The company declined to provide an outlook for the rest of the year due to uncertainty surrounding the pandemic.

Despite this period of weak demand, Caterpillar stock has nearly recovered to pre-pandemic levels. That recovery will be tested as the pandemic and the associated recession continue to play out. Shares of Caterpillar were down about 0.2% by early Friday afternoon.