Sales composition and a software subscription backlog are among the factors figuring in Autodesk's current success and future prospects.

Computer-assisted design (CAD) titan Autodesk (ADSK -2.27%) delivered vigorous fiscal 2021 second-quarter results on Aug. 25. Shares have trailed down modestly since, however, because of a cautious revenue outlook for the remainder of the year. As of this writing, Autodesk's stock has dipped about 3% in the first few days following the earnings release, though it's still up 33% year to date. To understand the longer-term impact of recent operations, let's review three key takeaways below that help illuminate the results of the past three months.

Autodesk's revenue increased by 15% against the prior-year quarter to $913 million, and its gross margin improved by 110 basis points to 91.1%. Perhaps more revealing than these metrics was management's control of company overhead: Operating expenses increased at a much slower rate than sales, growing by just 6.6%.

Consequently, Autodesk generated nearly seven percentage points of operating leverage, as operating margin climbed by 680 basis points. This operating leverage was of course beneficial to the bottom line. Net income more than doubled to $98 million, against $40 million of net income in the fiscal second quarter of 2020. 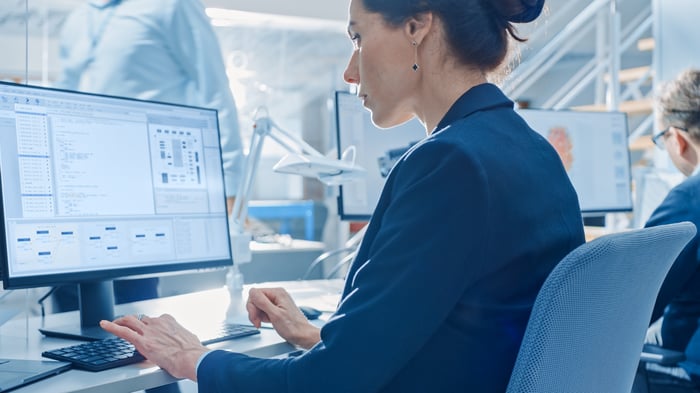 Autodesk employs a sales model that's mostly indirect -- about 70% of sales are generated by distributors and resellers. This model contributes to the organization's rising operating margin, as sales from such parties carry a mostly fixed expense -- commission  -- although it does incur ongoing training and support costs related to its selling partners.

Both direct and indirect sales benefit from the company's strategy of offering multiple entry-level price points for primary products like AutoCad and Fusion 360. Small and medium-sized businesses, as well as larger enterprise customers, are able to test out Autodesk's products before adding on programs or scaling up to comprehensive subscription packages.

Although both Autodesk and its selling partners utilize salespeople, increasingly, a focus on digital sales is paying off. In the second-quarter earnings conference call, CFO Scott Herren revealed that during the period, 75% of new customers came through online channels. The company clearly reaped benefits from its online positioning during the first months of the pandemic. During the call, CEO Andrew Anagnost reiterated Autodesk's long-term goal to derive 25% of total annual revenue from direct digital sales, which occur through Autodesk's branded online store.

The organization's RPO jumped by 19% year over year in the second quarter, to $3.3 billion, outpacing its reported sales improvement during the period of 15%. This speaks to the vitality of Autodesk's subscription software growth and is impressive even for a leading software-as-a-service (SaaS) company.

Current RPO (the portion of RPO the company expects to recognize as revenue within the next twelve months) expanded by 15%, to $2.3 billion. This leaves a cool $1 billion in non-current RPO -- backlog that will be recorded as sales more than a year from the end of the second quarter.

Just how robust is Autodesk's total backlog? Six months through the fiscal year, RPO of $3.3 billion is about 90% of the company's estimated fiscal 2021 revenue of approximately $3.7 billion. A backlog that's nearly equal to a year's worth of revenue is quite a handsome buffer to enjoy during tumultuous times.