Please ensure Javascript is enabled for purposes of website accessibility
Log In Help Join The Motley Fool
Free Article Join Over 1 Million Premium Members And Get More In-Depth Stock Guidance and Research
By Rachel Warren - Updated Sep 3, 2020 at 10:23AM

Bargain stocks don't come much cheaper than this.

Finding stocks that are both great and cheap can be a challenge. Although share price is one factor among many to consider when deciding whether to add a stock to your portfolio, companies that trade too cheaply aren't always the best buys.

On the flip side, just because a stock is cheap doesn't mean it isn't a good buy. Given the uncertainty of these economic times, you're definitely not alone if you're looking for bargain stocks with growth potential.

Even if you don't have a large wad of cash to deploy, you can still start your investing journey or expand your portfolio. Without further ado, let's take a look at two great stocks that are currently trading for less than $10 each.

Opko Health (OPK 7.97%) makes medicines and diagnostic tests. It qualifies as a mid-cap stock, with a market capitalization of $2.2 billion. Its shares closed Aug. 28 at $3.34.

For the first quarter, Opko Health reported consolidated revenues of $211.5 million, down from $222.5 million a year prior. However, earnings in the pharmaceutical division were up 23% year over year to $31.1 million. The company closed the quarter with $34.5 million in cash, cash equivalents, and marketable securities.

The second quarter, however, saw consolidated revenue surge by 33% to a total of $301.2 million. During Q2, revenue from the diagnostics division rose by 40% to $251 million, while pharmaceutical segment revenue was up by 2% to $29.3 million.

Those significantly augmented diagnostic revenues were the result of demand for two COVID-19 tests developed by Opko's BioReference Laboratories subsidiary. BioReference launched a molecular COVID-19 test on March 13; by the end of March, it had reached a daily testing capacity of 35,000 and had administered about 700,000 of these tests, which detect whether a patient is actively infected with COVID-19. BioReference also launched a COVID-19 IgG antibody test on April 27; antibody tests determine whether a patient has been previously infected.

By the close of Q2, BioReference had run more than 2.2 million of its molecular COVID-19 tests and nearly 332,000 of its antibody tests and had scaled up its footprint to more than 500 testing locations across the nation. BioReference also inked a four-month agreement with the U.S. Centers for Disease Control and Prevention in July to supply commercial surge-capacity coronavirus testing.

Beyond its coronavirus-related offerings, Opko has two key products on the market. The first is its 4Kscore Test for diagnosing aggressive prostate cancer. The second is Rayaldee, a prescription medication approved for a certain subset of adults with stage 3 or 4 chronic kidney disease. Prescriptions written for Rayaldee rose 45% in Q2, and its sales of $8.6 million amounted to close to one-third of the pharmaceutical division's revenue. In June, the U.S. Food and Drug Administration (FDA) granted Opko authorization to launch a phase 2 human study of Rayaldee as a possible treatment for individuals with mild to moderate cases of COVID-19, with enrollment set to begin in the current quarter.

Opko has also announced that it intends to file a Biologics License Application (BLA) with the FDA this fall for somatrogon, a long-acting human growth hormone treatment it is developing and commercializing with Pfizer (PFE 0.34%). Management announced in June that somatrogon had met both endpoints in a pediatric phase 3 clinical study in Japan.

Although Opko doesn't have a diverse array of products on the market, it has maintained its profitability during the pandemic, and the share price is up 124% year to date. Analysts project that the company will boost its revenue by an average of 12% annually over the next five years. 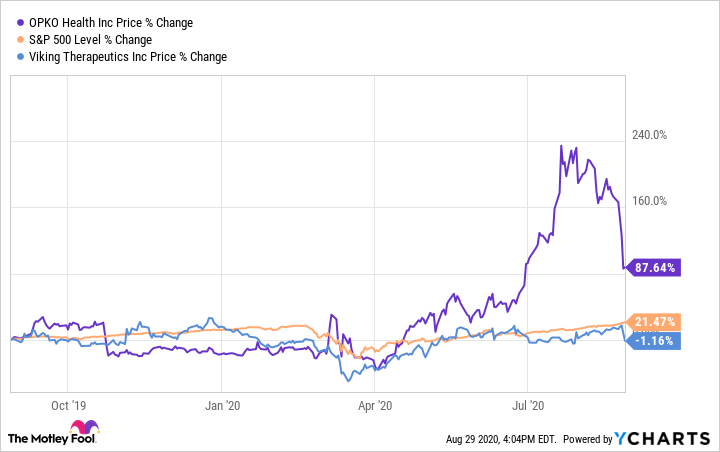 Viking Therapeutics' (VKTX 5.87%) share price fell sharply along with the rest of the market in February and March, but it had essentially recovered by Aug. 28; the stock closed that day at $6.83, about flat from the start of the year. The company is a small cap, valued at nearly $497 million.

The clinical-stage biopharmaceutical company has a variety of products in development geared toward patients suffering from endocrine and metabolic disorders. One of those, VK2809, showed "statistically significant" improvement for one indication in phase 2 results released Aug. 28, and Viking is currently enrolling subjects in another phase 2b study for VK2809 in a different set of patients. Another, VK0214, is moving toward a phase 1 trial, with management submitting an Investigational Drug Application (IND) to the FDA for VK0214 in the second quarter with the intent of beginning a phase 1 trial in the upcoming quarter.

Viking Therapeutics closed the second quarter with $263 million in cash and booked a net loss of $19.3 million for the first half of 2020. Although an investment in this company would be speculative at the moment, the rewards could be massive if either VK2809 or VK0214 (or both) makes it to market. Non-alcoholic fatty liver disease (NAFLD), which VK2809 treats, is the most prevalent chronic liver illness in the nation, and in 2018, market research firm Technavio projected that the worldwide market for NAFLD therapies would hit $2.8 billion by 2022.

In light of these facts, it's no wonder that some Wall Street analysts forecast that Viking Therapeutics could achieve annualized revenue growth of 40% over the next five years. That's pretty impressive potential for an extremely cheap stock.