Please ensure Javascript is enabled for purposes of website accessibility
Log In Help Join The Motley Fool
Free Article Join Over 1 Million Premium Members And Get More In-Depth Stock Guidance and Research
By Jeremy Bowman – Sep 3, 2020 at 8:26AM

The dot-com era offers some lessons for today's irrational exuberance.

These companies haven't unveiled a groundbreaking product, made a major acquisition, or entered a new market. Instead, they've merely announced that they're splitting their stocks, and on Monday, both stocks jumped after their respective splits were completed. Tesla, whose shares split 5-for-1, surged 12.6%, adding more than $50 billion to its market cap, while Apple gained 3.4% after splitting its shares four ways, tacking on more than $70 billion in market value.

Monday's gains culminated a remarkable rally set off by a frenzy ahead of the stock splits. While splits don't add to the value of the stock, they increase the availability of shares by lowering the price, making them more accessible to retail investors, and indicate that management expects the share price to continue to rise. Though they are generally perceived as a bullish signal, they don't change any of the fundamentals of the company or the value of the shares. Generally, splits don't elicit much of a response from investors, but at times they can spark rallies of their own. 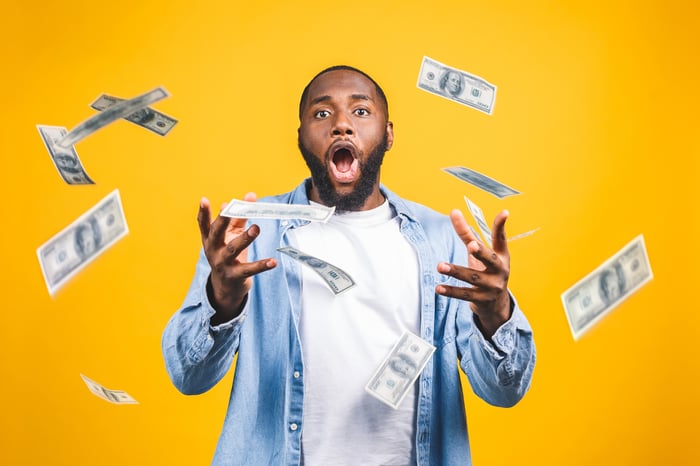 A number of brokerages reported outages amid a swarm of buyers for the two splitting stocks and Tesla's ticker was trending on Twitter at one point. It was the kind of rush that follows sought-after IPOs like Facebook's in 2012.

While investors can't help but be pleased with the stock's gains as Tesla is up 72% in the last month and Apple has jumped 34%, those gains, driven by little more than investor euphoria and speculation, are reminiscent of another era that was famous for inflated tech stocks.

The dot-com bubble is remembered mostly for the euphoria over newly created internet stocks that led to a boom and bust, but stock splits helped drive much of the fever in the early days. Amazon, as it rose nearly 2,000% from the beginning of 1998 to the end of 1999, split its stock on three separate occasions. The stock crashed by more than 85% from 2000 to 2002, and the company has yet to do another stock split despite massive gains.

Other examples of individual stocks soaring on splits abound. Sony shares jumped 7.7% on Dec. 28, 1999, following a split announcement. After General Electric, one of the most valuable companies in the U.S., bounced following a stock split, Argus Research analyst James Kelleher explained at the time, "From a mathematical point of view, this doesn't add value, but it's a strong psychological move." Yahoo!, as big a dot-com darling as any, split its stock three times during the boom.

Back then, Cantor Fitzgerald chief market strategist Bill Meehan said the fervor for stock splits had become a "retail phenomenon," referring to retail investors, and commentator Herb Greenberg derided the trend, saying, "This split thing is getting way out of hand."

What today's era has in common with the dot-com boom is that these moves are also being driven by retail investors. Online brokerages like E*Trade Financial helped democratize stock trading and make it more accessible for retail investors in the late 1990s, and today Robinhood has brought in a new class of investors by offering no-fee trades, a move that other online brokerages have followed. Commission-free trading has helped encourage day trading, and the bull market that began in March has led to increases in activity from retail investing, especially as Americans have had limited options for spending their time and money.

Apple and Tesla are among the most popular stocks on Robinhood, and through the first half of the year retail investors have made up 19.5% of trading activity, up from 14.9% a year ago and about 10% a decade ago. At the end of last year, Robinhood investors held 4.4 million positions in S&P 500 stocks; now they have more than 14 million. New E*Trade accounts have also spiked during the crisis with more than 250,000 additions in March, compared to less than 50,000 in the months prior. Mom-and-pop investors clearly want in on the rally and have helped fuel the boom in Apple and Tesla.

Is it a warning?

After their recent surges, it's easy to call Apple and Tesla overvalued, but it's also true that each one dominates its respective market. Apple has built a consumer tech empire on devices like the iPhone, iPad, and Mac, while Tesla is the clear leader in electric cars, which many analysts expect to be a massive market, eventually displacing traditional combustion vehicles. The rise of Tesla, which has struggled to deliver consistent profitability and has been saddled at times with other problems, including liquidity, is more reminiscent of dot-com stocks. The stock is up more than 1,000% over the past year, and the surge over the last month has come on little news. At its current valuation, the company is more than twice as valuable as any other car manufacturer, including Toyota, Volkswagen, and General Motors, despite being much smaller by production.

Apple, meanwhile, is a mature company whose high-growth days are behind it. With a P/E ratio near 40, the stock is more expensive than it's been at any point since before the financial crisis. While investors have bid the stock up earlier in the year on hopes for a 5G "supercycle" of upgrades as well as a subscription bundle, the recent gains seem to have come predominantly from the stock split, much as they have for Tesla as well.

One thing is clear. The momentum-fueled rally can't go on forever, and the higher it goes, the more likely it will be that the bubble will burst.

Bidding a stock up because of a split is nothing new, but the disconnect between a split-induced surge and a fundamentally unchanged company means investors are paying more money for the same amount of value. That's a sign that the game has turned psychological and euphoria over future gains, rather than improving fundamentals, has become the primary driver of growth.

The lessons of the dot-com era, which show how a stock-split-driven boom can end in disaster, have never been more relevant.