Please ensure Javascript is enabled for purposes of website accessibility
Log In Help Join The Motley Fool
Free Article Join Over 1 Million Premium Members And Get More In-Depth Stock Guidance and Research
By Keith Speights - Sep 3, 2020 at 6:47AM

This marijuana milestone will probably be an exercise in futility.

A historic vote by the U.S. House of Representatives is on the way this month. House Majority Whip James Clyburn recently said in an email that the full House will vote in September on the Marijuana Opportunity Reinvestment and Expungement Act of 2019, also referred to as the MORE Act.

This vote will be a major milestone for the cannabis industry because it will be the first time either chamber of the U.S. Congress will consider removing marijuana from the list of federally controlled substances. The MORE Act also would expunge all nonviolent federal convictions related to marijuana.

With such a pivotal legislative moment right around the corner, you might think that marijuana stocks are on the verge of taking off. That could be the case, but don't buy pot stocks just because of the upcoming vote on decriminalizing marijuana. Here's why. 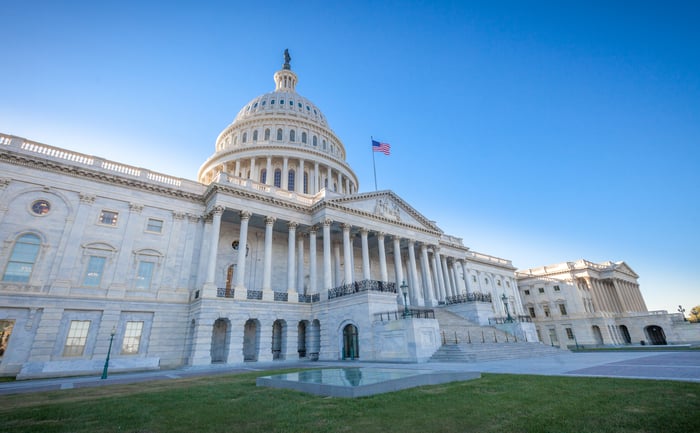 Will the House pass the MORE Act? It seems highly likely.

The legislation sailed through the House Judiciary Committee in November 2019 with a 24-10 vote. It even had solid bipartisan support with more than 50 cosponsors from both parties. The chances of winning in a full House vote appear to be very good.

But regardless of how the House vote goes, it will almost certainly be a futile effort. For any bill to become law, it must pass both the House and the Senate and then be signed by the president. Don't hold your breath that those second and third steps will happen.

Senate Majority Leader Mitch McConnell is no fan of marijuana legalization. That might partly be due to his desire to protect the hemp market in his home state of Kentucky. With Sen. McConnell calling the shots, the odds that the MORE Act would be brought before the full Senate for a vote are slim to none.

Even if, by some miracle, the Senate did vote to pass the MORE Act, it could still hit a brick wall at the White House. President Trump warned Republicans in August that they shouldn't put marijuana legalization on the ballot when they're running for office.

The expected vote on the MORE Act by the House later this month will be important from a symbolic standpoint, at least. It could also cause some stocks to jump.

For example, investors have waited for a long time to see the day when Canopy Growth (CGC -4.25%) could expand into the U.S. marijuana market. I wouldn't be surprised if Canopy's shares move higher on the House vote. The company is in the best position among the leading Canadian cannabis producers to profit from U.S. marijuana decriminalization (and perhaps eventual legalization) thanks to its deal to acquire Acreage Holdings (ACRGF) and its close relationship with Constellation Brands (STZ -0.95%).

U.S.-based cannabis stocks could also enjoy a nice bump. Green Thumb Industries' (GTBIF 3.84%) shares have soared so far this year thanks to rising sales. Even the hint that the progress is being made toward legalizing pot at the federal level would likely provide an additional catalyst for the stock.

Conversely, there's at least one cannabis stock that could potentially decline somewhat with the U.S. House vote on the MORE Act. Innovative Industrial Properties (IIPR 2.13%) is practically printing money as the leader in the cannabis real estate capital market. It's possible that investors could become a little concerned that a move toward legalization could pave the way for more competitors to edge in on IIP's turf. My view is that IIP would still win over the long run, but its stock could slip if such worries arise.

Again, though, any moves either up or down by marijuana stocks in response to the House vote on the MORE Act will be temporary. The bill will almost certainly be dead on arrival in the Senate.

There is one reason, however, for investors in marijuana stocks to be optimistic: The coming House vote could set the stage for passage of the MORE Act (or something similar to it) in the next Congress.

Democrats appear to be in a great position to retain control of the House. Based on current polls, they also have a decent shot at winning a majority in the Senate and recapturing the White House. If that happens, the path to decriminalizing marijuana at the federal level and allowing states to make their own decisions on legalization will become a whole lot easier.

If you have an itch to buy marijuana stocks, a possible blue shift in November is a much better reason to do so than the symbolic House vote this month.