Many people consider themselves either value investors or growth investors. Here's why that mindset can blind them to some of the best opportunities.

In his 2018 book Factfulness, Hans Rosling points out what he calls humans' "gap instinct" -- "that irresistible temptation we have to divide all kinds of things into two distinct and often conflicting groups." This oversimplification also applies to investors. Consuming financial media may convince you that you have to choose between fast-growing, cash-burning technology companies or 100-year-old businesses that are no longer growing but appear to be safer and cheaper choices.

ResMed (RMD -1.05%), a maker of devices and masks for sleep disorders and respiratory diseases, is just the kind of middle-ground investment that could reward both types of investors. The company focuses primarily on treatments for sleep apnea (an interruption to breathing due to airway obstruction), chronic pulmonary obstructive disorder (COPD, the obstruction of airflow to the lungs due to inflammation), and asthma (a condition in which the airways swell and produce extra mucus that interferes with normal breathing). 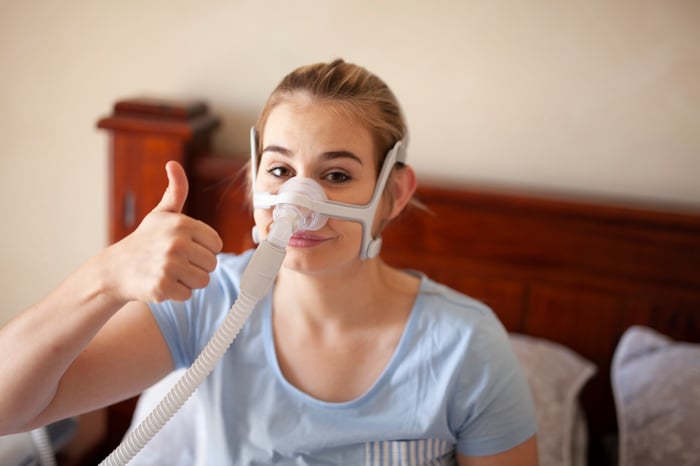 Public awareness campaigns from the National Sleep Foundation and others have demonstrated that getting enough sleep is a critical component of a healthy lifestyle. The importance of sleep has been backed up by research from several government organizations, including the National Institutes of Health and the Department of Defense. This attention, coupled with device availability and custom fitting, have increased adoption for ResMed's devices and expanded its addressable market.

That said, COVID-19 hasn't spared ResMed entirely. The pandemic has disrupted its momentum by temporarily dimming the demand for its products, a condition management expects to persist for much of fiscal 2021. With some sleep clinics shut down and hospitals directing resources toward critical care, many of the sites a patient would get diagnosed with sleep apnea or COPD are inaccessible. Additionally, many potential customers for ResMed's software products have also put spending on hold. But over the long term, the pandemic is increasing adoption of all forms of digital health, which will benefit ResMed eventually -- and the company has plenty of momentum to weather the storm.

Annual revenue has grown consistently over the past five years, from 8% in 2015 to 13.4% in 2020, reaching $3 billion. This trend is likely to continue as the number of potential customers increases. And it will; globally, the estimated number of people who have sleep apnea has grown to 1 billion, a tenfold increase since 2007. In the U.S., the number is estimated at 22 million, with 16 million Americans diagnosed with COPD and 25 million with asthma. Given similar prevalence of these conditions in other countries, the company will have no shortage of new patients to help over the coming years.

Management is investing for the future

ResMed is also well-positioned for whatever comes next. Spending on research and development (R&D) has remained consistent at about 7% of sales over the past decade -- in line with other device makers. These investments have produced innovations that improve user experience and increase usage; the world's smallest CPAP device and memory-foam mask cushions are just two examples.

The company has also made acquisitions to bolster its position in a changing healthcare industry. As insurers move toward reimbursing providers based on both the quality of service and its cost (rather than simply paying a flat fee for a service rendered), care outside the hospital has grown in importance as a way to ensure patients get the appropriate treatment at the right time in the correct setting.

The acquisition of Brightree in 2016 added cloud-based healthcare records to ResMed's offerings, and its purchases of HEALTHCAREfirst and MatrixCare in 2018 brought in billing and analytics systems for non-acute settings such as home health, nursing facilities, senior living homes, and hospices. These investments are paying off -- ResMed's software-as-a-service (SaaS) revenue was up 29% in the most recent fiscal year to $355 million, showing its increasing importance as part of the business. SaaS made up 7% of revenue in 2018 and 12% in fiscal year 2020.

Guarding against a permanent loss of capital

Plenty of investors over the years have articulated how important it is to avoid losing money. The idea may seem obvious, but we often fail to ask ourselves how likely it is that any individual investment could be permanently wiped out. As investors, we tend to be captivated by stories of innovation, growth, and a far-off future, often fraught with peril. One of the best metrics we can use to assess the risk level of an investment is the interest coverage ratio, which shows how much of a company's operating profit goes to interest payments.

The interest coverage ratio helps investors understand how easily a company can pay the interest on its existing debt. It compares the money left after paying employees and spending on sales, marketing, and R&D to what the company owes in interest each year. The closer the ratio gets to 1, the more likely a company is to default on its debt payments if it faces any unforeseen challenges.

ResMed has maintained a ratio of higher than 15 for the past five years. An interest coverage ratio of 2 is considered the minimum for financial health, so ResMed is exceptionally safe using this criteria. The company also shines compared with the healthcare industry average of 8.8.

With steady growth, a large and growing market opportunity, an expanding SaaS business, and plenty of incoming profit to cover its modest debt, ResMed offers an enviable balance of growth and safety. The company's short-term performance may not draw headlines in the financial media, and its stock price is unlikely to see drastic ups and downs, but investors who own shares of ResMed can feel confident the company is financially sound and positioned to continue delivering profits well into the future as it moves with the changing healthcare landscape.

Healthcare investors who plan on holding their shares for at least five years, as the company continues delivering steady performance and compounding profits, can sleep well at night owning ResMed.