Please ensure Javascript is enabled for purposes of website accessibility
Log In Help Join The Motley Fool
Free Article Join Over 1 Million Premium Members And Get More In-Depth Stock Guidance and Research
By Royston Yang – Sep 8, 2020 at 9:31AM

The restaurant chain has successfully leveraged digital sales to ride through the pandemic. 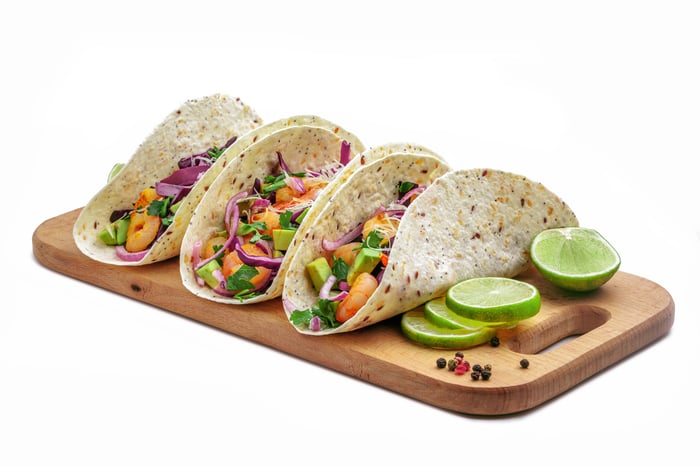 Comparable-store sales hit their nadir during April at negative 24.4% year over year, but steadily improved over the months to end at positive 2% in June. Chipotle also opened 37 new restaurants during the quarter, taking advantage of the downturn to continue its growth path. Digital awareness was enhanced through advertising as well as new delivery partnerships with Grubhub and Uber Technologies' Uber Eats.

CEO Brian Niccol mentioned on the company's latest earnings call that Chipotle has been able to retain around 70% to 80% of its digital sales gains while recovering around 40% to 50% of in-store sales. It's great news for investors, as this means the company is enjoying the best of both worlds: garnering new customers through its digital presence and enjoying the slow recovery for restaurant dine-ins.

Chipotle intends to work on its goal of having two new menu items per year now that reopenings have given the company a chance to test out new items again. Its rewards program has grown to nearly 15 million members after being launched just 15 months ago, and the rate of enrollment has almost doubled during the period that overlapped with the COVID-19 pandemic.

This platform helps the company to analyze transaction data from customers and allows Chipotle to send out personalized promotions to drive more frequent purchases for a larger average basket size. With the company's strength in building up its digital channels, investors should expect more good news from the company in the coming quarters.