These healthcare companies have had plenty of help in building the manufacturing capacity needed to produce billions of vaccine doses.

Under normal circumstances, it would be considered highly unusual for a biotech or pharmaceutical company to start building out manufacturing capacity for a drug that hasn't yet been approved by the U.S. Food and Drug Administration (FDA). But 2020 has been anything but "normal." The United States government has already paid billions of dollars to healthcare companies working to develop a vaccine against the novel coronavirus, well ahead of their vaccine candidates' approvals. The federal government has a vested interest in the development of a safe and effective vaccine given that the virus has contributed to the deaths of nearly 900,000 people worldwide and wrought trillions of dollars in economic damage.

While we don't know for sure which vaccine candidates will be approved by the FDA, we have a very real sense of the large size of the vaccine market opportunity. But which companies are acquiring the manufacturing capacity needed to supply the world with a COVID-19 vaccine in 2021? The answers might surprise you. 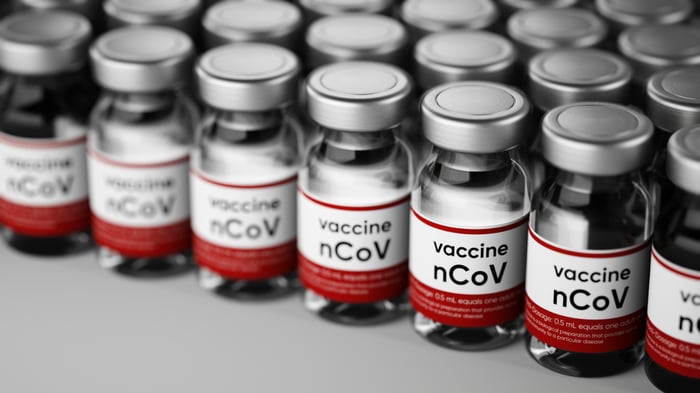 Small-cap vaccine biotech Novavax (NVAX 0.58%) has acquired manufacturing capacity for approximately 2.75 billion doses of its vaccine candidate, NVX-CoV2373. In May, the biotech acquired Praha Vaccines and its manufacturing facility in the Czech Republic. For $167 million in cash, Novavax gained the manufacturing capacity to produce 1 billion doses of vaccine next year. Novavax signed deals with AGC Biologics and PolyPeptide Group in the following month, in which they agreed to manufacturing an adjuvant called Matrix-M, required by the vaccine, which boosts the patient's immune response. In July, Novavax penned a contract with FUJIFILM Diosynth Biotechnologies, which has the ability to produce between 500 and 600 million doses annually. In addition, pharmaceutical giant Takeda Pharmaceutical agreed to manufacture 250 million doses in Japan, and the Serum Institute of India plans to manufacture 1 billion doses of an approved vaccine for use in India and throughout Asia. The U.S. government also pre-ordered 100 million doses of NVX-CoV2373 for $1.6 billion.

On the second-quarter conference call, CEO Pascal Soriot said that "everybody is always focused on clinical results, but having a vaccine that can help the world means you have to scale up the manufacturing, and that's a very important dimension that tends to be forgotten." The company reported that it has agreements in place with 20 contract manufacturing organizations (CMOs) around the world. Like Novavax, AstraZeneca has an agreement with the Serum Institute of India to manufacture 1 billion doses of its vaccine once it's approved by regulatory authorities. And these manufacturing numbers seem to be constantly increasing. Recent reports suggest that AstraZeneca's ultimate goal is to manufacture up to 3 billion doses in 2021.

Back in March, when the coronavirus truly made itself known in the U.S., Johnson & Johnson (JNJ 0.02%) was one of the first pharmaceutical companies to receive a major grant from the federal government. The Department of Health and Human Services (HHS) cut the healthcare giant a $456 million check to help develop a vaccine. While the company was still in the midst of animal studies, its chief science officer, Paul Stoffels, said the goal was to deliver 1 billion doses of its COVID-19 vaccine in 2021.

In July, Johnson & Johnson signed a massive $480 million work order with Emergent BioSolutions, a leading CMO, to provide manufacturing capacity for COVID-19 vaccines over the next five years. The company announced last month that it had reached an agreement to supply 100 million doses of its vaccine to the U.S. government in 2021 in exchange for $1 billion. In a press release, Johnson & Johnson said that it "aims to meet its goal to supply more than one billion doses globally through the course of 2021, provided the vaccine is safe and effective."

In July, Sanofi (SNY -2.13%) and GlaxoSmithKline (GSK -0.76%) scored a $2.1 billion contract with the federal government for 100 million doses of a vaccine that the companies are collaborating on. Sanofi, the lead partner, started phase 1 clinical trial testing last week. Sanofi is producing the vaccine candidate itself, while GlaxoSmithKline is adding an adjuvant that should enhance immune response. The two companies plan to manufacture up to 1 billion doses of vaccine a year, internally and through external CMO agreements.

Back in May, the biotech company Moderna (MRNA 3.18%) signed a major 10-year manufacturing contract with Lonza Group to produce Moderna's COVID-19 vaccine, mRNA-1273, and future vaccines. While the companies hope capacity will reach 1 billion doses, the minimum target is 500 million doses.

On the second-quarter conference call, Moderna CEO Stephane Bancel said: "In terms of the capacity, I'll confirm what we have said before, which is: For 2021, the 500 million dose[s] per year continues to be our base plan, meaning the team has a good sense of how to execute over that plan. And the team continues to work really hard over many different approaches, from new process equipment to de-bottleneck to find a path to 1 billion dose[s], which we still consider at this date as an upside." The company announced a $1.5 billion deal with the U.S. government back in August to provide 100 million doses.

Pfizer (PFE 3.06%) is collaborating with German company BioNTech (BNTX 5.64%) to develop a COVID-19 vaccine candidate. Like Moderna, the two companies are focused on an mRNA vaccine. that could have serious distribution challenges. Pfizer's vaccine must be kept frozen at negative 94 degrees Fahrenheit during shipment and storage. And once it's thawed, it reportedly has to be used within 24 hours. This might limit distribution opportunities for the vaccine, even if approved.

On Pfizer's April conference call, Chairmand and CEO Albert Bourla said the company is producing "millions of doses of potential vaccine at risk by the end of 2020." If its vaccine succeeds in earning FDA approval, Pfizer will then "rapidly scale up capacity to produce potentially hundreds of millions of doses in 2021." The U.S. government has preordered 100 million doses for $1.95 billion.

Who will vaccinate the world?

Novavax and AstraZeneca are leading the pack in terms of vaccine manufacturing capacity. Both companies are optimistic about earning an emergency use authorization (EUA) from the FDA for their potential vaccines by the end of the year. If these two healthcare companies (or more) can earn an EUA, there is no reason why each business won't capture and benefit from a small piece of the massive market for a coronavirus vaccine.