Please ensure Javascript is enabled for purposes of website accessibility
Log In Help Join The Motley Fool
Free Article Join Over 1 Million Premium Members And Get More In-Depth Stock Guidance and Research
By Rick Munarriz – Sep 22, 2020 at 8:05AM

You don't need to go to a greyhound race to know that a dog has to win. Let's look at three out-of-favor investments and pick the one that could be a big bargain right now.

It's hard to get excited about AMC Entertainment (AMC -1.70%), Norwegian Cruise Line (NCLH 0.67%), and J.C. Penney (JCPN.Q) these days. All three stocks have fallen sharply this year, and understandably so given the swift decline in their businesses and near-term prospects.

Things don't have to end badly for all of them, though. Let's size up these three risky battleground stocks. Two of them are likely to keep feeling the pain, but one of them could be a screaming buy at this point. 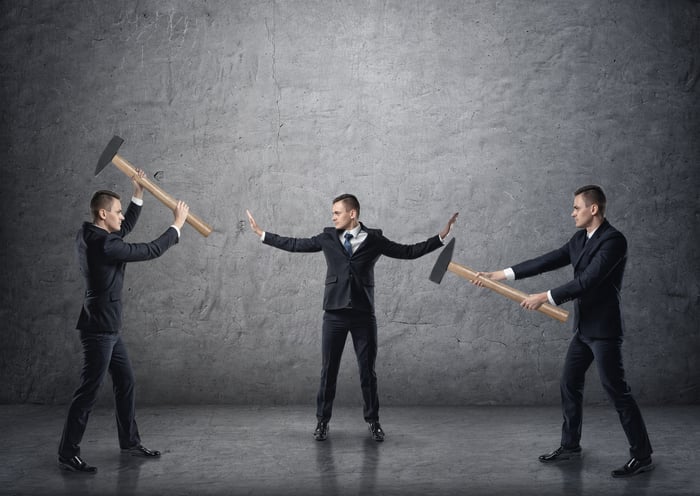 Disqualified at the starting line

The view isn't pretty in the rearview mirror, especially since multiplex operator AMC and cruise line specialist Norwegian Cruise Line were essentially out of business in their latest quarters. Revenue plummeted 99% -- yes, 99% -- for the two companies for their quarters ending in June.

J.C. Penney has held up better on that front, since it operates on a different fiscal calendar from AMC and Norwegian Cruise Line. However, net sales for the quarter that ended in July declined by 45%. That's an absolute disaster, especially since many of its stores reopened during the quarter and its net loss for the period popped eightfold.

J.C. Penney's attempt to win this race ends here. It filed for bankruptcy reorganization in mid-May. A pair of mall operators have stepped up to bail it out, but that doesn't the shares that you can buy today will be worth anything once the deal is complete. The department store chain's Chapter 11 will allow it get out of some bad leases and burdensome debt, but common stockholders are always at the end of the payout line. Even worse, the stock could be completely zeroed out in a few weeks or months. As risky as AMC and Norwegian Cruise Line may be, things aren't likely to go that badly for them.

We're down to two consumer-facing companies that were essentially on hiatus through the entirety of the last quarter, but there are plenty of differences between them. The AMC bullish argument would begin by pointing out that more than 80% of its theaters are now open. Norwegian Cruise Line isn't sailing until November at the earliest, and no one will be stunned if by the time we get there we've already pushed out the restart of stateside cruises into 2021.

The Norwegian Cruise Line bullish counter would be that it has been more consistently profitable than AMC in the past. AMC was in the black for six of the past eight years before, but that's a step down from Norwegian Cruise Line, which had been profitable for 11 consecutive years until 2020 cracked a hole in the hull of its income statement. However, income investors would argue that unlike the industry's two larger cruise lines, Norwegian has never returned money to its shareholders in the form of a dividend. AMC, in contrast, played a healthy quarterly dividend through the end of last year.

A big question will be which industry will recover more quickly. Analysts see Norwegian Cruise Line returning to positive net income by 2022, but that will change as restart dates get pushed out. Wall Street pros don't see AMC turning the corner on the bottom line through at least 2024. Both companies will be limited in their potential until we have a handle on COVID-19. Your local movie theater and favorite cruise ship will limit guest counts and dissuade others with restrictive rules. Even after the pandemic is over, it will take time for AMC to persuade moviegoers to come back, just as it will be a lengthy process for the cruising industry to convince passengers that sailing is safe.

AMC and Norwegian Cruise Line have a few things in common. They both trade at an enterprise value of roughly three times trailing but depressed revenue. They also improved their liquidity in the wake of the COVID-19 crisis, giving them enough money to get them into 2021.

AMC is the one that gets the nod for the screaming buy, though, largely because of its competitive position within the industry. There will be a shakeout in the multiplex industry, but the largest player will survive, and AMC will benefit from the closure of rival movie houses.

Norwegian Cruise Line isn't as fortunate in its industry. Two other publicly traded rivals are larger and have raised more money. A larger percentage of its passengers on canceled sailings have been requesting cash refunds than on rival cruise lines. There won't be demand for as many cruise voyages in the near future, and folks are more likely to vacation closer to home in the not-so-near future. The top dog itself is in the process of unloading 18 of its less efficient vessels this year.

The smaller player tends to lose out in the shakeout. In a rosier climate, it would get taken out at a premium, but we're at the point where the competition can ride it out until the weakest player buckles before buying its assets at a discount.