Utilities like Southern Company (NYSE:SO) don't offer the high-powered growth potential of other stocks. Instead, the company's main appeal is to income-focused investors like retirees, given its above-average dividend yield of 4.8%.

Here's a look at the sustainability of that payout and whether that makes it an appealing buy for dividend-focused investors. 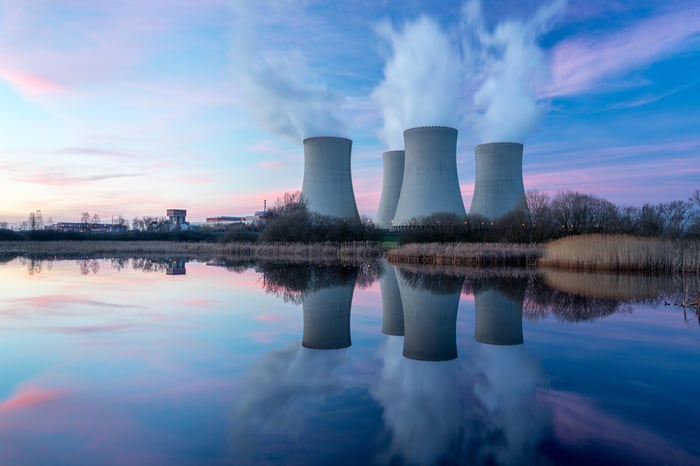 Southern Company has an excellent dividend track record. Overall, the utility has paid its shareholder like clockwork, sending them at least as much as the prior payout level every quarter since 1948. Even better, the company has increased its dividend for the last 19 consecutive years.

Unfortunately, the payout isn't on the firmest of foundations these days. After increasing it by $0.08 earlier this year, Southern Company is on track to pay out $2.56 per share. However, because of some headwinds from COVID-19 and other issues, the utility only expects to generate $3.10 to $3.22 per share of adjusted earnings. The midpoint of that range puts its dividend payout ratio at 81%, well above the 65% average of its peer group.

On a more positive note, the company has a solid investment-grade balance sheet with credit ratings in the mid-to-high BBB/Baa range. However, rating agencies have a negative view of the company, primarily due to the risks facing its Georgia Power subsidiary as it builds two new nuclear power units.

These days, Southern Company's main focus is finishing the Vogtle 3 and 4 units by their regulatory-approved in-service dates of November 2021 and 2022, respectively. The company is aggressively working to meet that goal, despite the impact of COVID-19, which caused some delays and cost overruns. The pandemic's effect alone increased the company's share of those projects by $150 million. Meanwhile, it's already several years behind schedule and many billions of dollars above the initial budget.

If the company can finish the project without running into any more delays or cost overruns, Southern should be in good shape. However, if costs keep spiraling out of control, Southern might need to reduce its dividend so that it doesn't put too much more pressure on its balance sheet.

Meanwhile, a longer-term concern with Southern Company is its plans to transition its power portfolio to meet its ambitious goal of net-zero emissions by 2050. While the company currently gets 18% of its energy from emissions-free nuclear -- which will rise after it finishes Vogtle -- and another 18% from renewables, coal still produces 18% of its power, and natural gas makes up the majority at 51%. Given that fossil fuel-focused power mix, Southern will need to invest an increasing amount of money into renewables in the coming years. That will be tough to do given its elevated dividend payout ratio and weaker credit profile compared to peers like NextEra Energy (NYSE:NEE), which has a 60% payout ratio and A-rated credit.

Those issues recently forced fellow utility Dominion (NYSE:D) to sell its gas infrastructure assets and reset its dividend to align its payout ratio to the peer group average of 65%. Southern might need to make similar moves so that it has the financial flexibility to transition from fossil fuels to emissions-free sources over the next few decades.

Verdict: Not appealing enough to buy

While Southern Company has been a great dividend stock for the past 19 years, its dividend growth engine seems to be running low on power, so its dividend growth days might be in the rearview mirror. Meanwhile, its high payout ratio and deteriorating credit quality could eventually force it to reverse course on the dividend so that it has the flexibility needed to finance its net-zero pledge. Given that risk, Southern's stock isn't all that appealing when rivals like NextEra offer more visible growth prospects backed by a top-tier financial profile.