Losing patent protection for a top-selling blockbuster drug is a big setback for any pharmaceutical company. For the past few months, investors and analysts have been concerned about pharmaceutical giant AbbVie (NYSE:ABBV). The company's major revenue driver, Humira -- which is the best-selling drug in the world -- is already facing significant revenue erosion in international markets where biosimilar competition has emerged, and it will face the same competition in the U.S. starting in February 2023.

But there is much more to the AbbVie story. Here are at least four reasons why AbbVie could be an attractive and safe pick for healthcare investors. 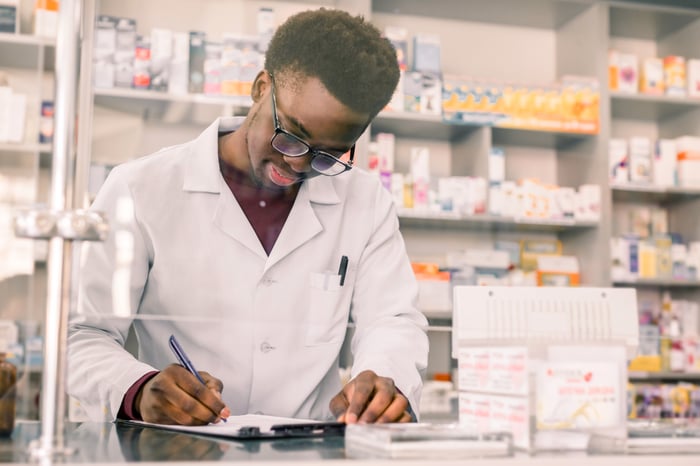 Humira is less risky than you think

Humira's European patents expired in October 2018. Subsequently, the drug's international market revenues dropped by about 31% year-over-year (YOY) in fiscal 2019 and then by close to 17% in first half of fiscal 2020. This biologic's revenues are declining at a rate far slower than the revenue drop generally seen after blockbuster small-molecule drugs go off-patent.

Humira faces stiff competition in Europe from biosimilars such as Amgen's (NASDAQ:AMGN) Amgevita, Biogen (NASDAQ:BIIB) and Samsung Bioepis' Imraldi, Novartis' (NYSE:NVS) Hyrimoz, Mylan's (NASDAQ:MYL) Hulio, and Fresenius Medical Care's (NYSE:FMS) Idacio. Many of these biosimilars are also priced at aggressive discounts to Humira. Yet the drug managed to report better-than-expected performance in the second quarter of fiscal 2020. AbbVie is offering heavy discounts on Humira in certain European markets, which may have helped in thwarting some of the biosimilar competition. It's also possible that patients are currently reluctant to switch to biosimilars, considering that they would like to avoid physician visits and lab assessments during the ongoing pandemic.

Unlike in Europe, the adoption of biosimilars has been pretty slow in the U.S., mainly because of regulatory challenges, low prescriber awareness, and concerns about safety. Although the U.S. Food and Drug Administration (FDA) has already approved biosimilars to Humira including Amjevita, Boehringer Ingelheim's Cyltezo, Hyrimoz, Hadlima (known as Imraldi in Europe), and Pfizer's (NYSE:PFE) Abrilada, the revenue erosion for Humira may not be as steep and rapid as investors fear.

Besides Humira, AbbVie has multiple growth assets which will most likely offset much of the effect of Humira's patent expiration after 2023.

AbbVie has already launched injectable biologic Skyrizi and an oral, small-molecule Janus kinase (JAK) inhibitor called Rinvoq, which together are likely to secure FDA approvals in all major indications of Humira. Additionally, Rinvoq is also targeting an indication for atopic dermatitis, a large market opportunity not covered by the Humira label.

Currently, the FDA has approved Skyrizi for the treatment of moderate to severe plaque psoriasis, while Rinvoq is approved to treat moderate to severe rheumatoid arthritis. Both Skyrizi and Rinvoq have managed to demonstrate superior efficacy and a favorable safety profile in plaque psoriasis and rheumatoid arthritis indications, respectively, when compared to Humira in clinical settings. Because it's an oral therapy, patients may further prefer Rinvoq due to higher convenience.

Going beyond immunology, AbbVie has also developed a robust blood cancer portfolio comprised of Imbruvica and Venclexta. Together, these drugs bring more than $6 billion a year in revenue.

The Allergan acquisition could be a major positive

AbbVie's acquisition of Allergan, completed in May 2020, will play a pivotal role in reducing AbbVie's revenue dependence on Humira. AbbVie is now targeting lucrative market opportunities such as treatment and prevention of migraine with some of its acquired assets (such as Ubrelvy and Botox Therapeutics, respectively). The company is also exploring opportunities in schizophrenia, bipolar disorder, and bipolar-related depression with Vraylar, which is close to becoming a blockbuster drug in fiscal 2020.

AbbVie has secured exposure to a wealthier patient demographic through the acquired aesthetics business, which includes market-leading brands Botox and Juvederm. Although the Botox and aesthetics divisions were affected by the coronavirus pandemic, business was almost back to pre-coronavirus levels by the end of the second quarter of fiscal 2020. And these sales are relatively secure from changes in drug pricing policies, considering that the patient pays the full price out of pocket.

AbbVie can further leverage its research and development and marketing capabilities to expand label as well as geographic penetration of these acquired assets. The company is also targeting cost synergies exceeding $2 billion by mid-2022.

A member of the S&P Dividend Aristocrats Index (comprised of companies which have increased their dividends for at least 25 consecutive years -- in AbbVie's case, this dates back to its time as part of Abbott Labs), AbbVie boasts a current dividend yield of 5.3%, much higher than the S&P 500's average of 1.8%. Yet the company's cash payout ratio is only 47.5%. Hence, AbbVie has significant financial flexibility to fulfill its dividend commitments.

AbbVie had a cash balance of $6 billion and carried debt in excess of $87 billion on its balance sheet at the end of June 2020. However, the company's robust free cash flows can be leveraged to pay off this debt. In the past 12 months, the company has generated cash flow of close to $14 billion. AbbVie aims to repay $15 billion to $18 billion in debt by 2021.

Yet its valuation remains cheap

AbbVie is trading at a forward price-to-earnings (P/E) multiple (calculated by dividing share price by forecasted earnings per share for the next fiscal year) of only 7.3. Peers such as Johnson & Johnson (NYSE:JNJ), Pfizer, and Amgen are trading at forward P/E multiples of 15.9, 10.8, and 14.7, respectively.

There is no doubt that Humira's patent expiration is weighing hard on investor sentiment about AbbVie. While I am not underplaying this risk, I believe that investors are ignoring many positives for this stock. Based on its risk-reward proposition, AbbVie looks like a smart buy for healthcare investors with average risk appetite.