The stock market has been in a bit of a slump recently but is still miles above where it was at the March lows. In fact, even after the recent declines, the S&P 500 index is still in positive territory for 2020.

Not all stocks have performed so well, especially those in many of the so-called "reopening" industries. Industries like hotels, retailers, office real estate companies, and pretty much any other type of business that relies on the ability and willingness of people to physically go somewhere are generally lagging the market. Here are three in particular that could have extremely bright futures but are still trading for a massive discount. 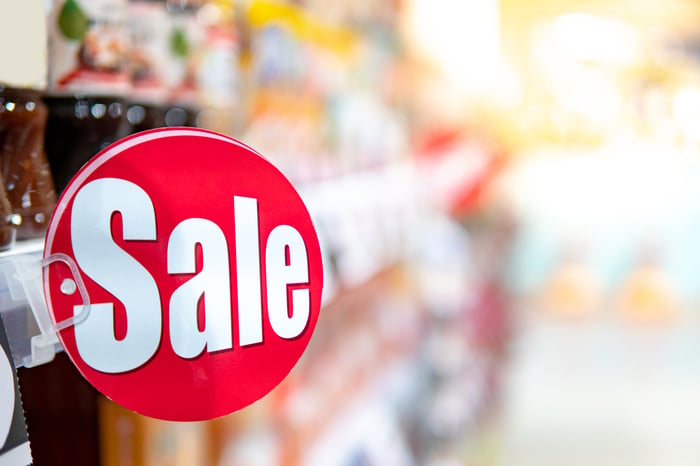 Real estate investment trust STORE Capital (NYSE:STOR) is down by nearly 30% this year, and really doesn't deserve to be. While its business took a hit as the coronavirus outbreak worsened, it's pretty clear that the worst is over.

Specifically, STORE owns single-tenant retail properties leased to retail, service, and manufacturing businesses. And while the majority of STORE's tenants were able to remain open during the pandemic, it did have significant exposure to some of the hardest-hit industries. About one-third of its portfolio is occupied by restaurants, day care centers, movie theaters, family entertainment centers, or health clubs.

Most (93%) of STORE's tenants opened for business by the end of August, and with the recent gradual reopening of movie theaters, it's safe to assume that this has increased. STORE collected 86% of its rental income in both July and August, and some of the uncollected rent is deferred, meaning that STORE will get it eventually.

To be sure, STORE certainly took a hit in the pandemic, and its business isn't back to where it was just last year. However, STORE is still very profitable and is earning more than enough to keep paying its dividend as its business recovers. Simply put, while I don't necessarily think STORE should be up in 2020, a 30% haircut is simply too much.

Walt Disney Company (NYSE:DIS) is trading for 15% less than it was at the start of 2020, and on the surface at least, it's easy to understand why. While some of its theme parks are now reopened, they are operating at a reduced capacity and missed out on months' worth of revenue due to closures. Disney's movie franchises aren't sending any blockbusters to theaters, and its cruise ships are sitting idle.

However, these are all temporary problems. When the pandemic is over and people feel safe traveling to crowded places, Disney's parks will be just as in-demand as ever. And with some of the most valuable movie franchises in the industry, Disney's box-office victories aren't over. In short, Disney's businesses that were strong before the pandemic will be just as strong after.

What's more, Disney has added a permanent stream of recurring revenue with its Disney+ streaming service, which launched late last year. The stay-at-home economy has accelerated the growth of the service, and it actually achieved its 2024 subscriber goals by mid-2020. In fact, because of the incredible success of Disney+ and the irresistible demand for its entertainment assets, the pandemic's effects could actually end up being a long-term tailwind for the business.

A rock-solid bank at a 40% discount

I saved the worst-performing stock for last. U.S. Bancorp (NYSE:USB), which is typically regarded as one of the most solid banking institutions in the world, is still down by more than 40% in 2020. 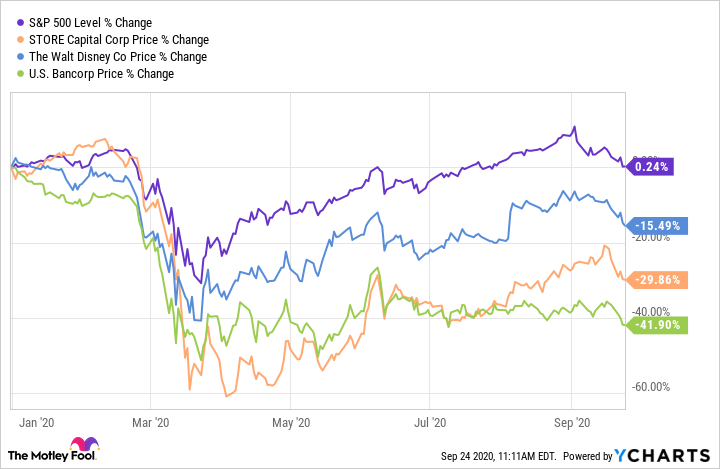 To be fair, there is a good reason why U.S. Bancorp is performing so poorly. There is tremendous uncertainty when it comes to the long-tailed effects of the pandemic on consumers' ability to continue to pay their bills, and there's a possibility that banks could face billions in losses. And as a pure commercial bank, U.S. Bancorp doesn't have investment banking revenue (which tends to increase in turbulent times) to help offset the risk.

Even so, U.S. Bancorp has a fantastic history of smart lending and avoiding risk, and this hasn't changed. In fact, it was the only big bank in the United States whose earnings didn't go negative during the financial crisis. While it could certainly take a short-term earnings hit, there's no reason this rock-solid institution should be trading for such a steep discount to its pre-pandemic levels.

The future is bright for these three

To be perfectly clear, I don't think that the path higher for these three stocks will be a smooth one. Unfortunately, the COVID-19 pandemic remains a very fluid situation, and news related to the pandemic will likely cause quite a roller-coaster ride for investors.

Having said that, these are three solid and well-run companies, and there's no reason to worry about their businesses from a long-term perspective. For patient long-term investors, these could be absolute steals at the current prices.