Shares of domestic exploration and production company WPX Energy (WPX) were higher by roughly 13% at 11 a.m. EDT today. Following along for the ride, but not quite to the same extent, was Devon Energy (DVN 0.81%), which was up just shy of 10%. Their gains were both related to the same news item.

WPX, with a roughly $2.8 billion market cap, and Devon, weighing in at around $3.7 billion, agreed to combine their companies in an all-stock deal. WPX shareholders will receive 0.5165 shares of Devon stock for every share of WPX they own. Devon Energy shareholders are expected to own 57% of the combined entity when all is said and done. Though it is being pegged as a merger of equals, Devon Energy will be the name that survives the deal. The CEO and chairman of WPX will end up being the CEO and president of the combined entity, with the CEO and president of Devon taking on the executive chairman role. So, in some ways, the key executive duties are being split fairly equally across the two companies. Investors clearly liked the deal, for both names. 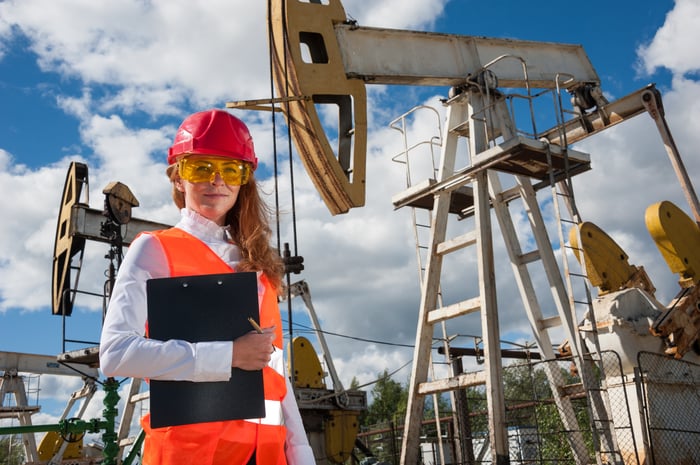 The biggest benefit of the merger is that it allows the combined entity to gain greater scale in the Delaware Basin region. However, being structured as an all-stock deal also means that debt won't be used to fund the transaction, preserving the company's balance sheet strength even as it manages to expand. And Devon and WPX expect the deal to be immediately accretive, though investors won't know that for sure until after the deal is consummated in early 2021. The hope is that increased scale and further cost-cutting efforts will allow the new Devon to accelerate free cash flow growth and enhance its ability to return cash to shareholders via a "fixed plus variable" dividend.

Although Devon and WPX's merger is interesting in and of itself, investors probably shouldn't jump aboard either name on this news. There's still a ways to go before the deal is completed, and the energy sector continues to be painfully out of favor -- for good reason, since supply and demand are deeply out of balance. Investors are excited today because of the merger news, but they could just as easily turn negative tomorrow if oil prices fall because of oversupply concerns. The bigger story, and more important takeaway, may be that consolidation is taking place in the U.S. energy sector. If this trend continues, it would likely be a big help in getting the broader energy industry back on its feet.

Oil Dividends Are Falling. Is It a Sign It's Time to Sell Oil Stocks?

Devon Energy's Dividend Is Down. Here's Why Investors Shouldn't Count It Out.
356%