Disney, Universal, and SeaWorld will combine to open five world-class roller coasters next year. Get ready to ride.

Central Florida's theme parks have had their ups and downs this year, but there will be even more come 2021. Disney (DIS 0.16%), Comcast's (CMCSA -1.08%) Universal Orlando, and SeaWorld Entertainment (SEAS 0.15%) will be introducing five new roller coasters to the Central Florida theme park terrain next year.

It will be a record year for major thrill rides, and Central Florida's gated attractions will need the boost that new attractions bring after a challenging 2020. COVID-19 shuttered the parks for months, and now that they're open none of them are operating profitably. If conditions improve to relax some of the social distancing measures that have capped guest counts as well as profit potential the new fleet of scream machines could be the spark that returns things to normal next summer. 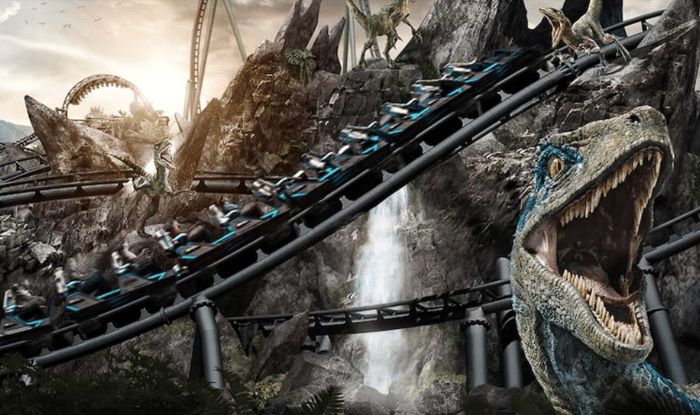 Jurassic World VelociCoaster at Comcast's Islands of Adventure was officially announced late last week, but parkgoers have seen the ride going up over the past year. It was obviously going to be themed to the Jurassic Park franchise, given its location smack dab in the center of park, and even the VelociCoaster name was well known to enthusiasts since Comcast had already filed for the trademark on the name. We now know that it will be the resort's fastest coaster with a top speed of 70 miles per hour. It will also have some pretty intense features including a barrel roll with riders twirling barely above the park's central lake. It is set to open next summer, and more than likely late spring since Jurassic World: Dominion hits theaters on June 11.

SeaWorld Entertainment's two coasters coming to the Sunshine State should've been running by now. Ice Breaker at SeaWorld Orlando and the highly anticipated Iron Gwazi at Busch Gardens Tampa were supposed to open this spring, but COVID-19 had other plans. They could have opened as early as June when SeaWorld Entertainment reopened its attractions, but the operator decided that it would be best to wait until next year when it can draw a larger crowd for the new thrill rides.

Disney has two coasters that should open in late 2021, and construction seems to be progressing accordingly. However, given budget cuts at Disney's theme park segment as it tries to get over this forgettable fiscal year it remains to be seen when we will actually get Guardians of the Galaxy: Cosmic Rewind at Epcot and TRON Lightcycle Power Run at the Magic Kingdom. The resort turns 50 on Oct. 1 of next year, and both rides have been marketed in the past as opening in time for that milestone.

White-knuckled coaster rides obviously won't save Central Florida's theme park industry. There will have to be considerable traction gained in the fight against COVID-19 to get tourists back into Central Florida to enjoy the new coasters. We will also have to succeeded in clawing our way out of this recession, because folks can just turn to their regional amusement parks if coasters is what they crave on limited vacation money. This year has been intense, but you may as well keep your coaster restraints fastened, because the year ahead could be just as wild.