Please ensure Javascript is enabled for purposes of website accessibility
Log In Help Join The Motley Fool
Free Article Join Over 1 Million Premium Members And Get More In-Depth Stock Guidance and Research
By Brent Nyitray, CFA – Updated Sep 30, 2020 at 11:36AM

Malls have reopened, but with this mall REIT's stock down almost 75% this year, it's a question worth asking.

The novel coronavirus pandemic has been particularly hard on real estate investment trusts (REITs) -- especially mall REITs, which entered the pandemic in a vulnerable position due to high debt loads and struggling tenants. Many major retailers have been pushed into bankruptcy, and the rest are still suffering from lower sales. The stock of Macerich (MAC -5.99%) is down almost 75% since the beginning of the year, so it certainly is worth asking whether the worst is over. 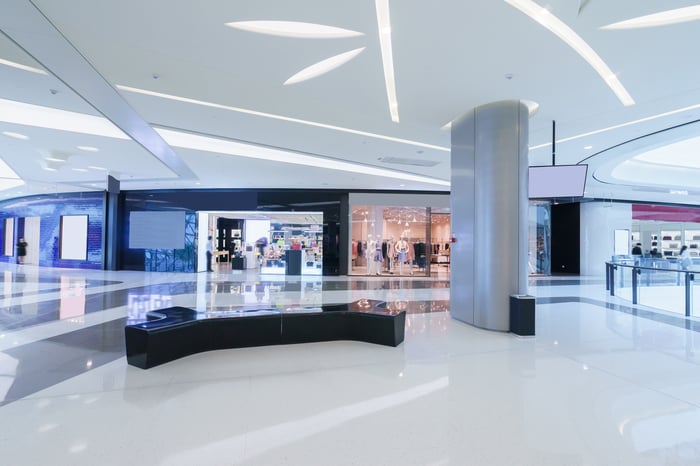 This year has been the retail apocalypse

Macerich owns or has an interest in 47 regional shopping centers and five large strip malls. The company has properties in many attractive urban markets, which should be doing well under normal circumstances. All of its properties were shuttered in mid-March, and 44 of them are back in business, including the important malls in New York City. The three remaining malls in California are closed subject to county restrictions.

The current year has been marked by a dismal trail of retail bankruptcies, including Pier 1, Ascena, and J.C. Penney. But Macerich has a well-diversified tenant exposure, with 138 different retailers. Its biggest tenant is L Brands, which accounts for just under 3% of rental revenue. H&M and Foot Locker are the only other tenants that account for over 2% of rents.

Macerich took a number of steps to preserve cash during the early days of the pandemic, including a big cut in its dividend. Prior to the crisis, Macerich paid a $0.75 cash dividend, which it cut to $0.50 (made up of $0.40 in stock and $0.10 in cash). The September dividend was further reduced to $0.15, paid entirely in cash. At current levels, that works out to an 8.5% yield on the stock. Macerich also took down its entire $1.5 billion revolving line of credit and slashed expenses.

The knock on Macerich has always been its indebtedness. It had a debt-to-funds-from-operations ratio (FFO is the REIT equivalent of earnings) of 11 times in 2019. In comparison, competitor Simon Property Group had a debt-to-FFO ratio of 6.5. With COVID-19 depressing FFO, ratios have increased for both companies. Macerich's ratio over the trailing-12-month period is 12.6, while Simon's ratio has increased to 9.5.

Macerich is probably not going to come close to generating the $537 million in FFO it generated last year. So far, it has about $183 million in FFO during the first half of the year. Since capital markets have been tight, Macerich is in the process of getting extensions for roughly $813 million of mortgage debt that is coming due from October 2020 to February 2021. We should get better color on where the company stands on this when it reports third-quarter numbers.

The consumers hold the key

While it is too early to say that Macerich is out of the woods, the worst is probably over unless we see a resurgence of the coronavirus. On the second-quarter earnings call, the company said that it collected about 40% of contractual rent in April and May. That number increased to 66% in July, and August was looking strong as well. That said, consumers are in rough shape, with initial jobless claims still in the high six figures. Ultimately, Macerich's fortunes will be tied to the return of shoppers. The National Retail Federation anticipates back-to-school spending could be a record, and a good school shopping season usually portends a decent holiday season.

Macerich has attractive properties in great urban locations, and better days probably lie ahead. That said, the stock might be dead money until we get better clarity on the status of consumers. For those willing to wait, the dividend yield of 8.5% is decent compensation.

This REIT Just Sold a High-End Mall for Nothing: What It Means
356%