The casino company and Wynn also have plans to safely host conventions.

Today, on the final day of September 2020, MGM Resorts International (MGM 1.11%) is opening its last two casinos to public access again, resuming operations at the NoMad Las Vegas and Park MGM facilities. On top of that, the Park MGM is reopening as the chain's first-ever, smoke-free casino resort, adding an ultramodern sensibility to MGM's most recent addition.

MGM Resorts says Park MGM ranks among its most popular destinations, mixing casino gaming, dining, and a large resort offering 2,700 guest rooms. Operating under the motto "Let's Clear the Air," the Park MGM will now be 100% smoke-free except for a few designated smoking areas, such as the Ride Share Zone, according to the resort's website. The resort states the purpose is to create a fresher atmosphere where "clean air is not an oddity or luxury, it's a given." The resort also bans hookahs and marijuana in the designated smoking areas. 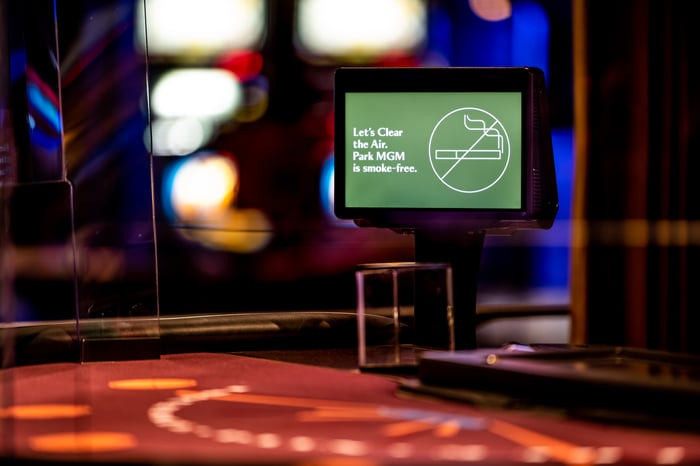 Nevada Governor Steve Sisolak announced the state is allowing conventions with up to 1,000 attendees, provided certain safety protocols are observed. MGM's Comprehensive Health and Safety Plan is founded on molecular testing for COVID-19, which provides results within 20 minutes on the site of gatherings. The company is partnering with Impact Health to provide the testing. Plexiglass barriers, physical distancing, masking requirements, and greatly increased sanitation and disinfection aim at providing additional safety.

The Las Vegas Review-Journal says Wynn Resorts is also planning to use rapid COVID-19 tests for conventions, enabling it "to get back to presenting the entertainment, experiences, nightlife and conventions we are known for" according to a company statement.