Chinese e-commerce giant Alibaba (NYSE:BABA) just held its annual investor conference over the last few days of September. The stock surged over 6% on Wednesday as analysts rushed to lift their price targets. Why? It wasn't the core Taobao, Tmall, and Alibaba marketplaces that boosted enthusiasm -- it was Alibaba's new rising stars.

The cloud is becoming profitable

Like its fellow large-cap U.S. stocks, Alibaba has been developing its cloud computing business over the past decade. It's now the Chinese market share leader by a wide margin. In the quarter ended in June, Alibaba's cloud made up 8% of overall revenue, but the unit grew at a sterling 59% rate. 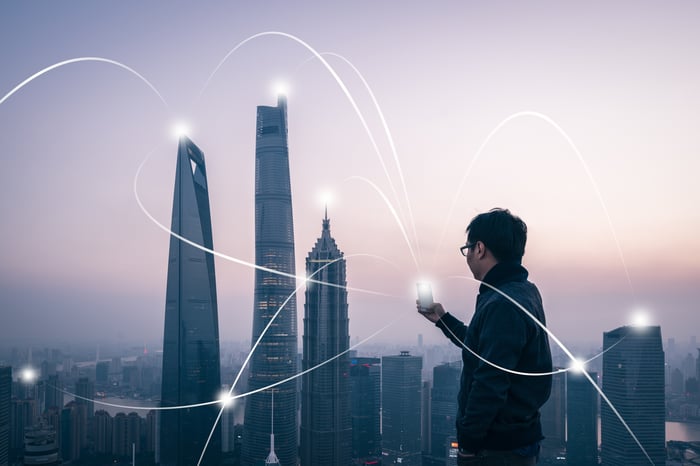 However, it was a comment from Chief Financial Officer Maggie Wu that caused Alibaba to shoot higher on Wednesday. Wu noted that the cloud unit would turn a profit for the first time in the current fiscal year, which ends March 31. That's an encouraging sign since Alibaba's revenue ($1.8 billion last quarter) is rather small compared to its U.S.-based cloud infrastructure-as-a-service counterparts.

In comparison, Amazon (NASDAQ:AMZN) Web Services had $10.8 billion in revenue last quarter, but earned fat profit margins of 31.1% at that scale.  That Alibaba is already becoming profitable at a much lower revenue base is certainly good news, as there were doubts about whether Alibaba's newer businesses could actually turn a profit.

If the cloud news wasn't enough to get investors excited, Alibaba pointed to a second high-growth unit that would also turn profitable this year, at least on a cash flow basis.

Unlike rival JD.com (NASDAQ:JD), Alibaba did not originally build out a massive logistics network when it started up in e-commerce, preferring the higher-margin pure marketplace model while leaving delivery to third parties. Cainiao was a joint venture founded in 2013 that provides data and technology solutions to third-party carriers, increasing their efficiency and scale.

Like the cloud business, that unit has also been unprofitable since its inception, but it has been growing very fast. Last quarter, Cainiao grew at a 55% clip. However, management now expects the Cainiao unit to be profitable on an operating cash flow basis this year. While operating cash flow isn't quite the same thing as profits, the analyst presentation showed narrowing losses at Cainiao as revenue accelerated in the COVID-19 environment.

Rival JD.com has been touted for its logistics platform as much as its marketplace. While JD's in-house delivery and Cainiao's business models are different, they overlap somewhat. Therefore, a high-growth and profitable logistics technology business could add another leg to Alibaba's value.

While some of these great results in high-growth cloud and delivery businesses were no doubt accelerated by COVID-19, there still appears a good solid runway for both units.

In the presentation, Alibaba noted that while China's GDP is about two-thirds that of the U.S., it only spends about a third of what the U.S. does on IT. Meanwhile, 10.4% of U.S. IT spending was on public cloud services, while only 3.4% of Chinese IT spending went to the public cloud.

That certainly leaves a lot of room for Alibaba's cloud to grow. Meanwhile, as China's 1.4 billion-person economy grows, package delivery both within China and abroad will likely continue growing as well. In light of these two high-growth and increasingly profitable segments, Alibaba investors certainly have a lot to be happy about after the investor day presentation and shouldn't hesitate to scoop up shares.