These three financial-sector stocks are all sharply higher, despite the overall pressure on the stock market.

Most of the stock market was in negative territory on Friday, as President Trump's positive coronavirus test rattled markets. As of 11:45 a.m. EDT today, all three major benchmark indexes were in the red. But a few financial stocks are trading significantly higher, and all for a similar reason. 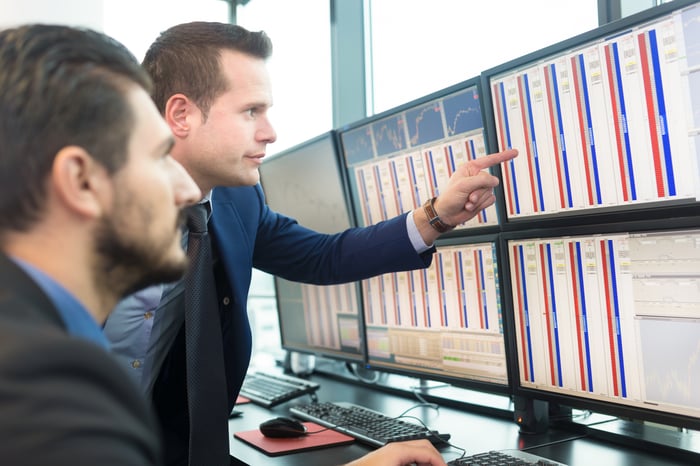 These three stocks aren't rising because of earnings, favorable industry data, or any other reason having to do with their underlying businesses. Instead, S&P decided to shake up its benchmark indexes, and all three of these companies were affected.

First off, the acquisition of E*Trade Financial by Morgan Stanley has been finalized, and this left a vacancy in the S&P 500. It will be filled by Pool Corp, which in turn left a vacancy in the S&P MidCap 400 index to go along with another vacancy caused by the deletion of Delphi Technologies from the midcap index. These vacancies are going to be filled by two stocks that were formerly members of the S&P SmallCap 600 index. And here's where our three financial stocks come into the picture.

Assured Guaranty, Capitol Federal Financial, and Renasant will all be joining the S&P SmallCap 600 index, one of the most widely used benchmarks for the health of smaller U.S. corporations. All of these moves will become effective on Wednesday, Oct. 7.

As you can see, the removal of E*Trade and Delphi from their respective indexes caused quite a need to shuffle companies around. And when a stock is added to an S&P index for the first time, it can be a big positive catalyst for the share price.

You might be asking yourself why inclusion in a benchmark index matters. There's no change in any of these three companies' businesses as a result of the moves.

But it can certainly cause upward momentum in the stocks, as we're seeing now. The primary reason is that every index fund that tracks the S&P SmallCap 600 will now be required to buy shares of Assured Guaranty, Capitol Federal Financial, and Renasant. And even for small-cap stocks like these, this could easily translate into hundreds of millions worth of stock being bought, which can dramatically tilt the supply-and-demand dynamics of these companies.

The anticipation of this buying pressure is what we're seeing now. Whether it will last or not remains to be seen, but for now investors are certainly glad to see these stocks moving into the prestigious and widely used S&P indexes.