The information is just a tip at this point, but allegedly there's "photographic evidence."

Months after Beyond Meat (BYND -7.31%) ended its first trial of plant-based Beyond Burger patties at Canadian McDonald's (MCD -0.24%) restaurants, rumor suggests the company's soy-free, pea and potato protein-based burgers might soon return to the Golden Arches. This time, however, the fresh rollout may be in the U.K., according to Wales Online and other outlets.

Though there is zero official confirmation and the reports are entirely speculative, website Vegan Food UK claims it has "photographic evidence" of the Beyond Burger's McDonald's comeback. Its reporting shows an apparent photograph of a McDonald's promotional flier announcing a "New McDonald's Vegan Burger." The flier's text says the "vegan certified" meal's ingredients include a burger made with "juicy Beyond Meat." 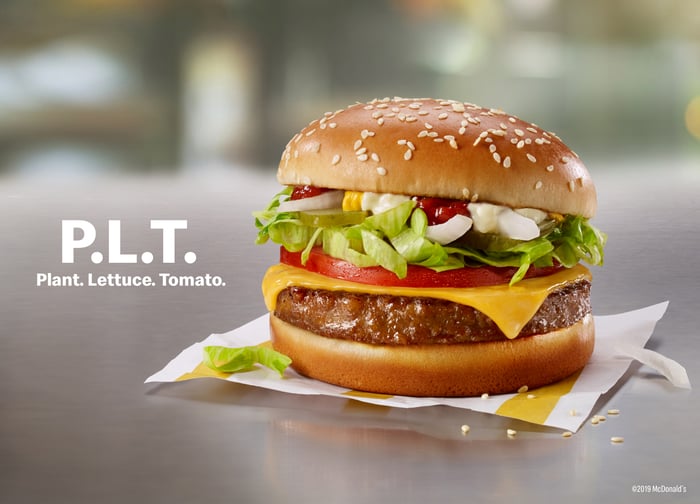 Vegan Food UK says it heard about the launch "months" ago from inside sources, but waited for a photo to "substantiate the news." The flier pictured includes no visible dates or mentions of the U.K. Vegan Food UK stresses the news is "unofficial" and is confirmed by neither McDonald's nor Beyond Meat.

Beyond Meat's previous trial of the Beyond Burger at McDonald's -- as the patty in a "plant, lettuce, and tomato," or "PLT," sandwich -- took place in Canada and ended in April of this year.

While there was speculation about why the plant-based burger dropped off McDonald's menu, Food & Wine reported the trial probably just ended as scheduled, quoting Beyond CEO Ethan Brown as saying the test "got good results in the beginning and got good results at the end." He added, "I can assure you, there's no issue with McDonald's."

Beyond Meat, which is popular among teens, might appear at U.S. McDonald's in summer 2021, some analysts, including Morningstar, speculate.

3 Reasons to Sell Beyond Meat Stock

Is Now the Right Time to Buy Beyond Meat Stock?
363%