The hotel chain continues to open new locations as it waits for a respite from the pandemic.

The hotel chain's shares are still down around 39% for the year, though they have recovered strongly from their low back in early April. 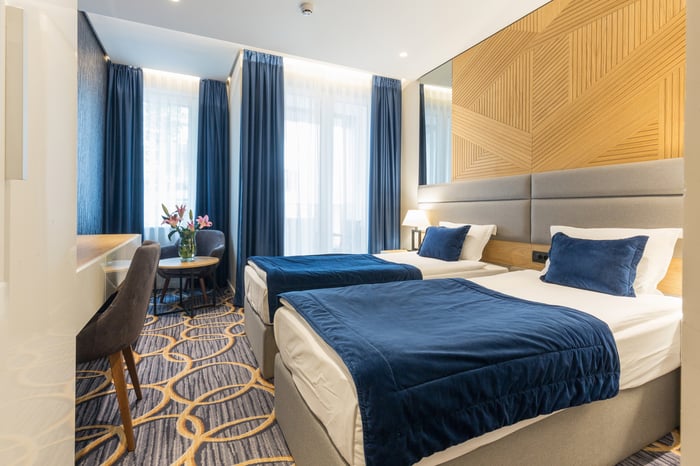 Marriott announced early last month that it will lay off 673 workers, or around 17% of its workforce, by late October. This news comes after the company furloughed around two-thirds of its corporate staff six months ago as demand fell off a cliff due to the COVID-19 pandemic. The hotel giant had reported dismal second-quarter earnings as travel demand was hit hard by border closures and lockdowns in numerous countries. Revenue fell 72% year over year and the company incurred a net loss of $234 million.

In September, CEO Arne Sorenson told Boston NPR member station WBUR that Marriott's business was still down 65% year over year in August and that it was not business as usual in any of the 131 countries the company operates in. China, he said, was the closest to normality.

To make matters worse, on Sept. 24, real estate investment trust Services Properties Trust sent a notice of payment shortfall to Marriott requesting $11 million to cover a revenue shortfall. The company has 10 days to respond to this letter, or the REIT will have the right to terminate its agreement with Marriott covering 122 hotels.

Marriott continues to struggle with plunging demand for its hotels as the pandemic shows no sign of abating. Management is doing its best to cut costs and hunker down to prepare for the eventual recovery. However, Sorenson said he believes business won't return to 2019 levels until at least 2022 or beyond.

Meanwhile, the company continues to open new properties around the world. Last weekend, it opened a hotel on Batam Island in Indonesia. In Japan, Marriott has signed an agreement with a real estate developer to open 11 new Fairfield properties in five prefectures by late 2022.

Marriott's brand name remains strong during this crisis, but investors may need a lot more patience to see a recovery in the company's fortunes.

Why Travel and Leisure Stocks Sank on Monday
376%