Several features of the cruise line's operations might set it apart from the pack.

While the COVID-19 pandemic has created rough sailing for the whole cruise ship industry, Royal Caribbean (RCL 1.64%) has been singled out this week for some positive analyst interest. Global financial services firm UBS gave the company a buy rating Monday while rating both Carnival and Norwegian Cruise Line Holdings as holds, Seeking Alpha reports.

In the accompanying research note, UBS analyst Robin Farley said Royal Caribbean "remains our top pick in the cruise space," citing "the advantage of its private island strategy" as the reason behind the endorsement. Farley also said UBS believes "early cruising in the U.S. will rely heavily on private islands given potential port issues." 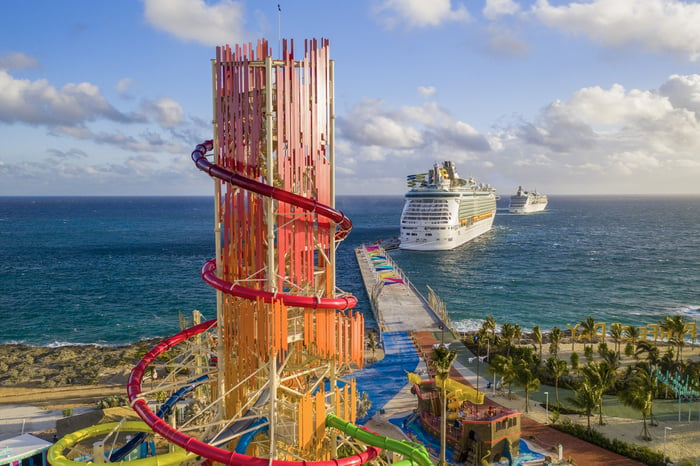 Cruise Industry News reported this morning Royal Caribbean appears to be setting up test cruises and increasing its staff in southern Florida. This region of Florida is the staging area for brief cruises to Royal Caribbean's CocoCay private island in the Bahamas, which features beaches, waterparks, dining, and other attractions. The news report says the ships Mariner of the Seas and Navigator may be involved in the possible upcoming launch of private island cruises.

Royal Caribbean's CEO Richard Fain announced the company will test all passengers and crew members for the coronavirus without exception as an added safety measure, RTTNews reports. "No other section of the travel industry, no other section does one hundred percent testing," he said. He also claimed the company's intention to "make our ships and environment a bubble" will make the voyages less hazardous than "their home communities" for guests.

Other cruise industry stocks such as Carnival have recently been given the thumbs-up by analysts expecting a near-future rebound in the hard-hit sector.