The enterprise software giant lays out an open approach to its Windows app store.

Antitrust scrutiny of dominant app stores, such as those operated by Apple (AAPL 0.19%) and Alphabet subsidiary Google, has intensified over the past year. Apple is waging an escalating legal war with Fortnite maker Epic Games, while lawmakers just issued a report accusing Apple of monopolistic behavior. Google is preparing to strictly enforce policies that require developers to integrate its billing system, which will likely only further stoke antitrust criticisms.

Enterprise software giant Microsoft (MSFT -0.18%) this week laid out new and very distinct principles for how it will approach its digital storefronts. 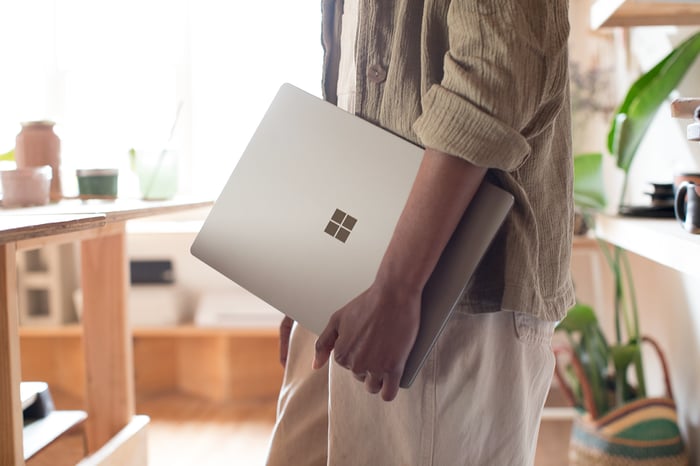 In a direct jab at rival tech behemoths, Microsoft is adopting 10 principles for how it will operate its app store that it says will promote choice, fairness, and innovation.

"We and others have raised questions and, at times, expressed concerns about app stores on other digital platforms," Microsoft Vice President and Deputy General Counsel Rima Alaily wrote in a blog post. "However, we recognize that we should practice what we preach."

Microsoft will not block competing app stores in Windows. Like most desktop operating systems, including macOS, users can generally install software from any source. On the mobile front, Android supports alternative app stores, while iOS does not. The software company will not discriminate against any specific business model or how a company delivers content, referring to its recent tussle  with Apple over how to offer Microsoft's xCloud game streaming service on iOS.

There are other guidelines around interoperability, quality standards, and data use, but the clearest shot at Apple revolves around payments. Microsoft will charge "reasonable" fees that reflect competition in software distribution on Windows, and the company will not penalize developers for the type of payment system they use for in-app purchases. Microsoft will not force developers to sell digital products or services within apps -- a reference to Apple guidelines requiring  most developers to offer the same purchases within apps as they do outside of the app.

"Windows 10 is an open platform," Alaily adds. "Unlike some other popular digital platforms, developers are free to choose how they distribute their apps."

How is the Xbox store different?

Preemptively addressing potential accusations of hypocrisy, Alaily acknowledges that Microsoft's Xbox platform uses a model that resembles the iOS App Store. The company charges a similar 30% cut for sales through the Xbox store, which is the only place where gamers can digitally purchase Xbox games.

Microsoft argues that the Xbox store is different because game consoles are "specialized devices optimized for a particular use" and have far fewer users compared to PCs and smartphones. The underlying economics of the video game industry are also quite different, with consoles often sold at or below cost. Microsoft concedes that it has "more work to do to establish the right set of principles for game consoles."