Please ensure Javascript is enabled for purposes of website accessibility
Log In Help Join The Motley Fool
Free Article Join Over 1 Million Premium Members And Get More In-Depth Stock Guidance and Research
By Jason Hawthorne – Oct 10, 2020 at 7:08AM

After doubling sales last year, this vaccine maker is speeding toward a revolution in the way humans prevent disease.

When cloud data company Snowflake (SNOW -1.75%) went public last month, it captured investors' imaginations with incredible sales growth, well-known backers, and a tremendous first-day rise in stock price. But at a valuation of well over 120 times sales -- more than 80 times that of the median S&P 500 stock -- much of the company's bright future is already priced in.

Investors who want to participate in that kind of hyper-growth, but are worried they missed out on Snowflake, may find the same captivating potential in early-stage biotech stocks such as Vaxart (VXRT 0.81%). The vaccine maker, which used an unusual merger and reverse stock split to go public in February 2018, could offer life-changing returns for investors willing to take a risk before the company's technology hits the market. While the downside is obvious -- the company could go bust -- success would mean astronomical growth from its current $780 million market cap. 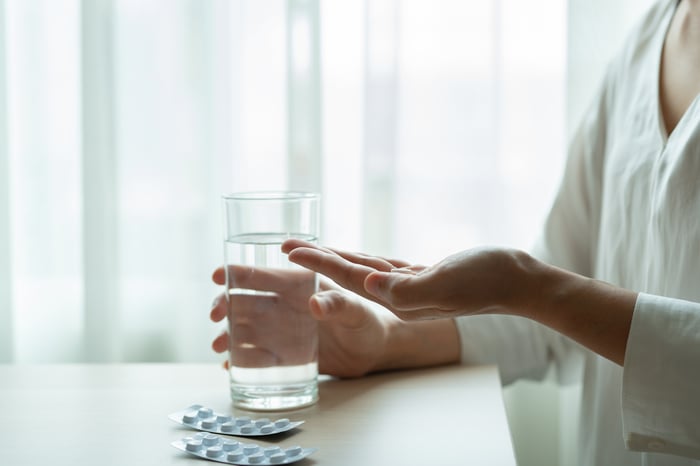 Roll up your sleeve and relax

About 45% of American adults get vaccinated for the seasonal flu. For those who don't, the reasons include fear of needles and limited availability, as is the case with other vaccines. There are good reasons we get vaccines from a shot rather than by other means, including faster absorption because muscles have greater blood supply and can hold a greater volume of medication than a shot under the skin. But that means the most effective way to get a vaccine into your system fast is one that many people naturally fear.

Vaxart hopes to solve this problem by introducing vaccines in pill form. The company's Vector-Adjuvant-Antigen Standardized Technology (VAAST) platform releases the drug in the small bowel, activating the immune system of the gut. In addition to bypassing needles, this would also revolutionize vaccine distribution -- there would be no need for refrigeration and no medical waste to remove, and patients could administer the treatment themselves, freeing up medical personnel and office space as well.

A pound of prevention, an ounce of treatment

Operation Warp Speed, the U.S. government's initiative to speed the development of COVID-19 vaccines and therapeutics, has distributed more than $10 billion to various companies involved in that effort. Almost all of those funds have gone to vaccine development, and Vaxart was among the recipients in late June. Before that, management announced in March that it had entered into an agreement with Emergent BioSolutions (EBS 0.78%) for the development and manufacturing of vaccine candidates, and in April that it had seen positive immune responses in animals for its COVID-19 vaccine candidate pill.

Vaxart has had some early success developing a tablet-based vaccine, recently receiving U.S. Food and Drug Administration (FDA) approval to begin enrolling participants in phase 1 of its COVID-19 vaccine study. It also received approval for a separate study comparing the company's oral H1N1 vaccine with the leading injectable version from drugmaker Sanofi (SNY 0.33%). Management now has clinical data from 12 trials against six different viruses and has a licensing deal with Johnson & Johnson (JNJ -1.20%) unit Janssen pending upon completion of a pre-clinical study.

A COVID-19 vaccine would likely require at least 200 million doses in the U.S. and 2 billion to 3 billion -- or more -- worldwide, so a solution in tablet form would be a revolution in vaccine administration. In fact, it might be the only way to effectively and sustainably treat the global population in a timely manner. Management has arranged manufacturing, research, and clinical trial partners for its approach to various viruses; if its treatment proves safe and effective, investors in Vaxart today will reap the rewards of getting in early on a company that changes the way humanity prevents diseases.