Please ensure Javascript is enabled for purposes of website accessibility
Log In Help Join The Motley Fool
Free Article Join Over 1 Million Premium Members And Get More In-Depth Stock Guidance and Research
By Daniel Foelber – Oct 11, 2020 at 8:43AM

These red-hot industrials have more room to run.

2020 has been life-altering, affecting the way we work, learn, communicate, and have fun. For investors, it has been arguably the single most polarizing year in the past decade. So far this year, the technology-dominated NASDAQ Composite has increased an astounding 26%, whereas the S&P 500 is up around 5.4%, and the Dow Jones Industrial Average just turned positive, up 0.5%, at the time of this writing. It is the single largest disparity between the indexes over the past 10 years -- the second largest was in 2019 when the NASDAQ outperformed the Dow by 13.5%.

At first glance, it may seem that tech stocks are the best way to make money in today's market, but a diversified portfolio would do well to include industrial stocks too. Here are three top industrial stocks that are quietly producing monster gains and are worth buying right now. 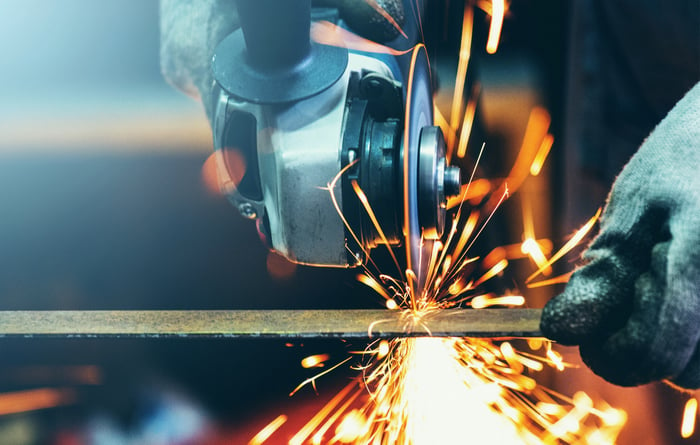 Just as many software companies are developing work-from-home tools, United Parcel Service (UPS -0.17%) is playing an integral role in the growing e-commerce market through its surging business-to-consumer (B2C) channel. Even with a 21.9% decrease in U.S. business-to-business (B2B) deliveries in the second quarter of 2020, UPS was able to grow revenue by 13.4% and net income by 8.8%, thanks to a 65.2% increase in U.S. B2C deliveries.

Despite blasting to a new 52-week high, UPS remains a buy for a number of reasons. The company has been able to grow earnings, revenue, and free cash flow (FCF) while reducing capital expenditures, a sign its business is becoming more efficient. In the first half of 2020, UPS earned an adjusted $3.9 billion in FCF, greater than the total FCF earned in 2019. It forecasts $5.6 billion in capital expenditures this year, around 12% less than last year. 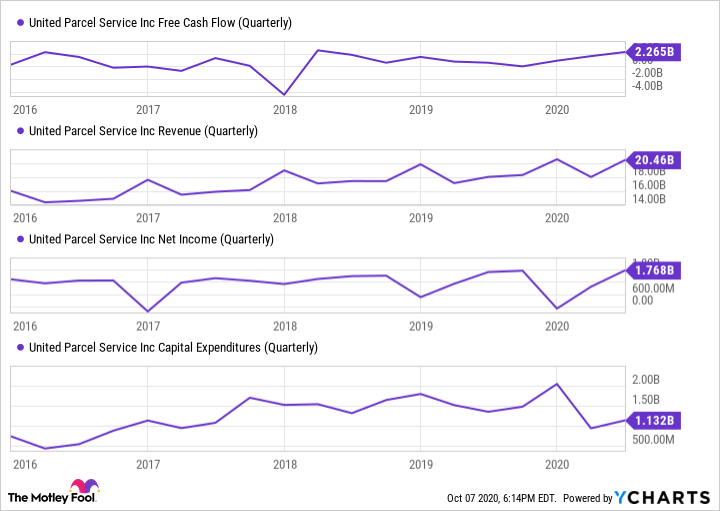 On top of its strong performance is a seldom-mentioned tailwind, cheaper fuel. UPS benefits as crude oil crashes -- and has saved $367 million on fuel in the first half of this year, despite significantly higher UPS Ground deliveries in response to higher B2C volumes.

Finally, UPS is one of the safest industrial dividend stocks on the market today. The company has increased its quarterly payout by nearly six-fold over the past 20 years and yields 2.4% at the time of this writing.

Sherwin-Williams (SHW -0.19%) is a well-known industrial paint and coatings manufacturer and retailer, with a rich history that dates back over 150 years. Lesser known is the strength of Sherwin-Williams' stock, which continues to outperform the market. 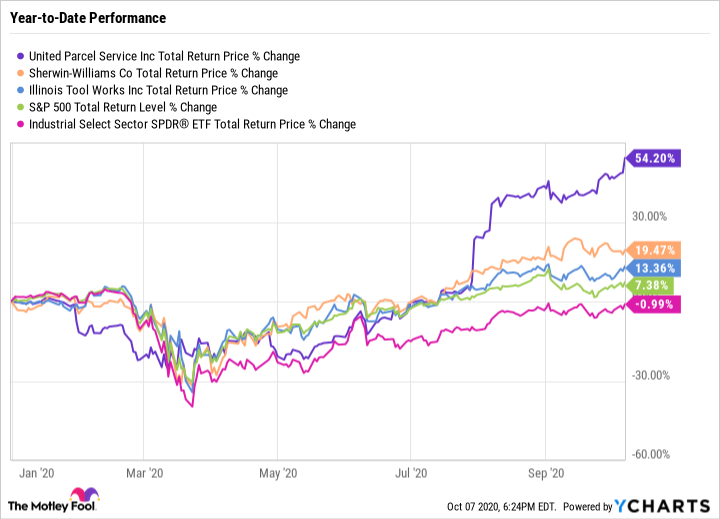 Sherwin-Williams' temporary store closures as a result of the pandemic impacted retail sales in the second quarter. Lower manufacturing and industrial output weakened its performance coatings division as well. But a 68% increase in consumer brands profit (thanks to a spike in home improvement projects) more than made up for these losses.

Like UPS, some of Sherwin-Williams' segments are down this year, but its overall business continues to grow. Aside from performance growth, Sherwin-Williams is one of the longest-tenured Dividend Aristocrats, having increased its dividend payment for 40 consecutive years. Sherwin-Williams yields a mere 0.8% at the time of this writing, which investors probably don't mind, given the stock is up more than four times the S&P 500 over the past decade.

Rounding out this list is another Dividend Aristocrat, Illinois Tool Works (ITW 0.13%), which has increased its dividend for 48 consecutive years. With a yield of 2.3%, Illinois Tool Works is typically seen as a stodgy income stock with steady low-single-digit growth, but the company has done a great job of growing net income and free cash flow despite falling revenue, thanks to its growing operating margin. 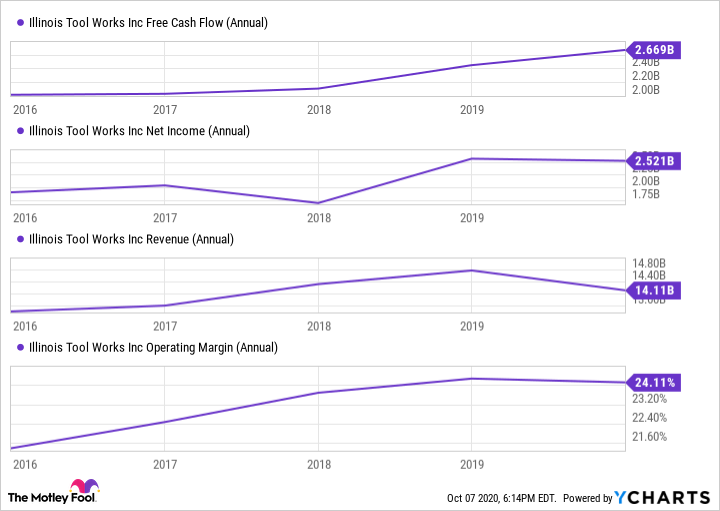 Although all of Illinois Tool Work's business segments are suffering, its diversified business model, margin growth, and reliable dividend make it a premium industrial to own for the long term. By 2023, the company expects to increase its operating margin further to 28%, which is expected to propel earnings per share by 7% to 10% per year.

High-quality industrial stocks like UPS, Sherwin-Williams, and Illinois Tool Works are well-known companies with a track record of strong performance and dividend growth. This year, all three companies proved yet again that they can navigate challenging business environments. Picking up a few shares of any one of these three stocks could be a great way to add income and stability to your portfolio.