The coronavirus pandemic is to blame for declines in fundamentals, the company says.

Even though Intuitive Surgical (ISRG 0.26%) considerably beat analyst estimates for both revenue and profitability for its Q3 of fiscal 2020, it wasn't enough to lift the stock late on Thursday.

The company, a top name in robotic surgical systems, released those figures after market close. They reveal that it booked revenue of just under $1.08 billion, down 4% on a year-over-year basis. Non-GAAP (adjusted) net income came in at $334 million ($2.77 per share) for the period, which was 18% down from the same quarter last year. 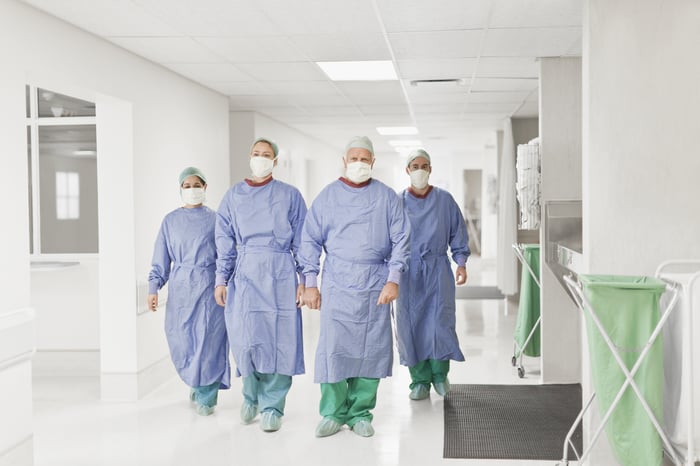 Nevertheless, both headline numbers handily beat prognosticator estimates. On average, analysts tracking the stock anticipated just under $968 million on the top line and a per-share adjusted net profit of only $2.02.

While the coronavirus pandemic had a damaging effect on Intuitive Surgical's business earlier this year (the number of elective surgeries fell sharply when the outbreak spread), the company said it's recovering. It's not out of the woods yet, however -- its year-over-year declines were largely attributable to fewer placements and shipments of the Da Vinci line of robotic-surgery products, its main stock in trade.

Investor concern seemed to be with the company's uncertain future, as it didn't proffer any guidance. "Due to the continued uncertainty around the scope and duration of the pandemic and the timing of global recovery and economic normalization, we cannot, at this time, reliably estimate the future impact on our operations and financial results," it wrote in the results announcement.

This isn't sitting well with the market. In after-hours trading, Intuitive Surgical's shares are down by 3.6%. That's a steeper fall than that experienced by the S&P 500 index across the market's standard hours.