Please ensure Javascript is enabled for purposes of website accessibility
Log In Help Join The Motley Fool
Free Article Join Over 1 Million Premium Members And Get More In-Depth Stock Guidance and Research
By Jim Halley – Oct 15, 2020 at 7:02AM

Shares have risen more than 62% year to date. Is the medical device company still a good buy?

Abiomed (ABMD -0.23%) struggled in 2019, but the stock has risen more than 62% so far this year. The question for most investors is how long that trend can continue for the medical device maker.

Abiomed's devices all have to do with the circulatory system, including the world's smallest heart pump, the Impella. Since the company acquired the Impella technology by buying German company Impella CardioSystems in 2005, Abiomed's revenue has risen every year. 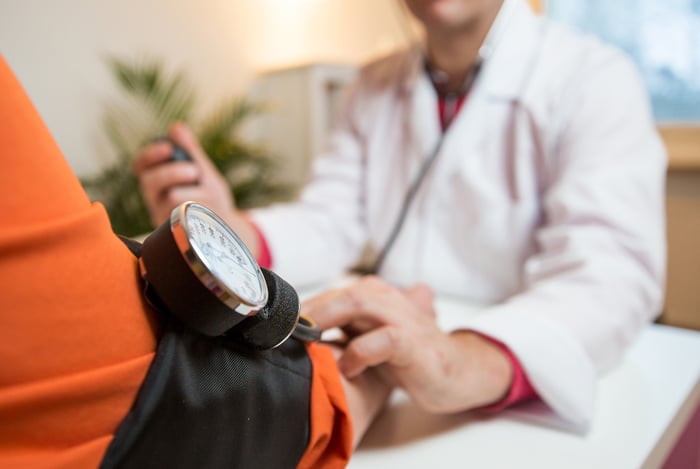 There are clouds on the horizon

While Abiomed's revenue was up for the fiscal year, the company is on pace for a third consecutive quarter of lower revenue, year over year. In the first quarter of fiscal year 2021, which ended June 30, revenue was down 21% versus the same period in 2020, and operating margin was down similarly, at 20.7%.

Abiomed has emergency use approval (EUA) from the Food and Drug Administration to use its Impella models on COVID-19 patients with heart failure or blood clots in their lungs. Initially, the FDA granted the EUA only to Impella's RP for right ventricle heart failure. But in August, the rest of the company's Impella pumps were given EAU approval to provide left ventricular help to COVID-19 patients who are on a heart-lung machine and develop fluid in the lungs or have myocarditis (an inflamed heart).

That has only slightly ameliorated a downward trend for Abiomed this year, since the number of Impella procedures done during the pandemic is down overall. Patient utilization has been ticking up since April, but not enough to match last year's numbers. The company says that procedures that were put off in the spring because of COVID-19 concerns were up 3% in June compared with May, though they were still down 8% year over year in July.

As you can see by this chart, the company's revenue has been climbing, but earnings per share have been heading down since early last year. 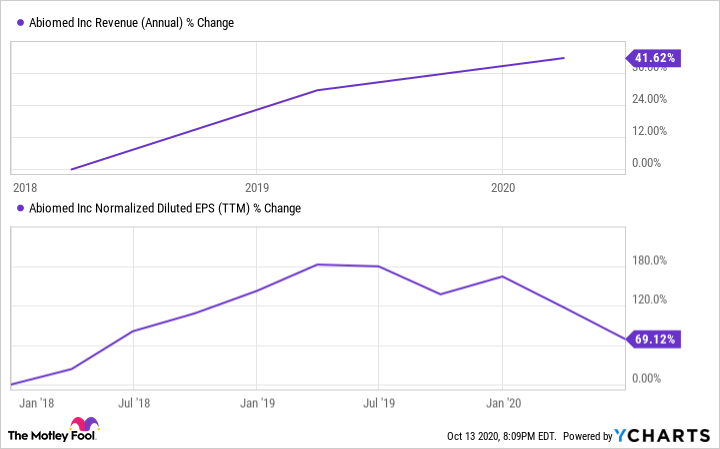 Last month, the FDA gave preliminary market approval to the company's newest heart pump, the Impella 5.5 with SmartAssist. The pump is designed to be minimally invasive, with a catheter diameter of about three millimeters. It's meant for short-term use (two weeks or less) for patients who have had a heart attack or patients who are in cardiogenic shock, when the heart can't pump enough blood to meet the body's needs.

The SmartAssist software with the Impella 5.5 uses algorithms to best determine when wearers of the device can wean themselves off the Impella to increase recovery survival rates.

A study by the American Society for Artificial Internal Organs found that patients with cardiogenic shock or other cardiac conditions had an 83.6% survival rate when using the Impella 5.5, including 76.1% who recovered native heart function.

The Danvers, Massachusetts, company also should soon see benefits from its purchase in April of Breethe, which makes extracorporeal membrane oxygenation (ECMO) systems that can provide oxygenation to heart patients with cardiogenic shock or any patient with respiratory failure.

Caution, but a nice long-term prognosis

In the short term, I'm concerned that the healthcare stock's price may be a bit high considering the company will likely deal with coronavirus pandemic headwinds for at least a few more months.

But there's only so long that serious heart conditions can be put off. Plus, there's little question the need for small, minimally invasive heart pumps such as the Impella will grow. A report by Transparency Market Research shows that, thanks in part to an aging population, the global heart pump market is expected to grow at a compound annual growth rate of 10% through 2027.

Abiomed is a healthy company, with a reported $600 million in cash and no debt, and it continues to emphasize innovation. It's a good long-term play, but one that would make more sense to buy following a dip in the stock's price.