The test run muscles in on Beyond's competitive advantage in one key way.

In a development echoing last year's chicken sandwich wars, Tyson Foods, Inc. (TSN -0.08%) threw down the gauntlet to noted plant-based meat-maker Beyond Meat and privately held Impossible Foods with its first U.S. launch of its "Unchicken sandwich." Diners can sink their teeth into a crunchy faux filet at Reno, Nevada and Salinas, California Jack in the Box, Inc. restaurants during the test offering starting today, according to the press release.

The trial run is slated to continue through Dec. 12 or whenever the selected restaurants run out of Unchicken. Notably, the offering, which uses plant-based chicken from Tyson's Raised & Rooted faux-meat brand, features pea protein isolate in the Unchicken filets. While Beyond Meat highlights the use of pea and potato protein rather than soy in its Beyond Burgers, its Beyond Fried Chicken experiment made use of wheat and soy protein. 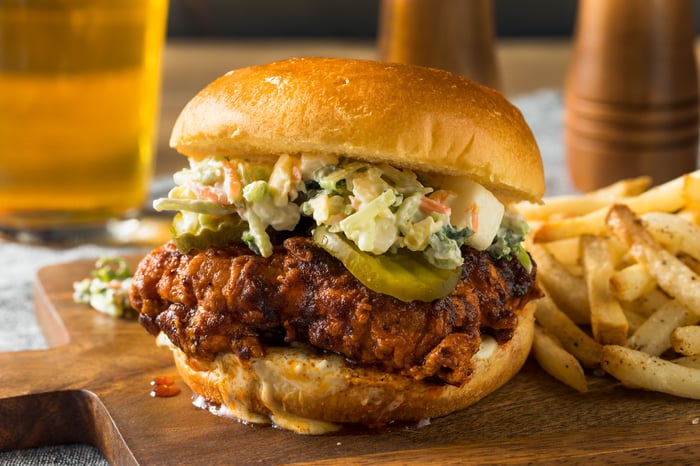 Tyson says its Unchicken filets are breaded and have been designed to meet flavor, texture, and "crunch" standards approximating actual chicken. The Jack in the Box offering is apparently aimed at COVID-19-driven ordering trends, with the release noting, "chicken sandwiches consistently top the list of most ordered delivery items, and during the pandemic, 'chicken' has been the most tweeted about food."

According to reporting by Forbes, Jack in the Box and Tyson are borrowing some details of their promotional campaign, including gifts of pandemic face masks infused with chicken aroma, from the Beyond Fried Chicken advertising methods. The Raised & Rooted chief product and innovation officer Jen Kennedy remarked, however, that Tyson is aiming at "forging our own path," adding that the company decided on the Unchicken filet because it "wanted to introduce a plant-based option in this space rather than the predictable meatless burger patty."