The company is chasing a massive opportunity, but growth slowed this year.

Many cancer patients undergoing treatment have impaired immune systems, so it's not a big surprise that some of them stayed away from clinic settings during the spring, when cases of COVID-19 were growing rapidly in the United States. Guardant Health (GH 0.13%), a company specializing in detecting cancer DNA circulating in the blood, saw a dip in clinical volume during that time, dampening results after the company more than doubled its revenue last year.

Guardant reported a revenue gain of 23% to $66.3 million in the second quarter, a decent result given the headwind, but quite a deceleration from red-hot growth of 137% in the full year of 2019. Guardant's revenue comes from tests taken by seriously ill cancer patients and drug companies conducting research in new treatments, and neither of those sorts of customers are going to put off buying the company's products for long. Will the company resume its torrid pace of growth as the pandemic threat subsides?

The treatment of cancer is still in the early phases of a sea change, as scientists design unique treatments for cancers with specific genetic characteristics. Precision oncology is increasingly reliant on understanding the genetic code of each patient's cancer, but that information is often difficult or dangerous to obtain through a biopsy of the tumor itself. Guardant Health is a technological leader in detecting tumor DNA circulating in the bloodstream (known as ctDNA, or circulating tumor DNA), and the advantages of that technique opens up a huge potential market for the company, broken down into these three market segments. 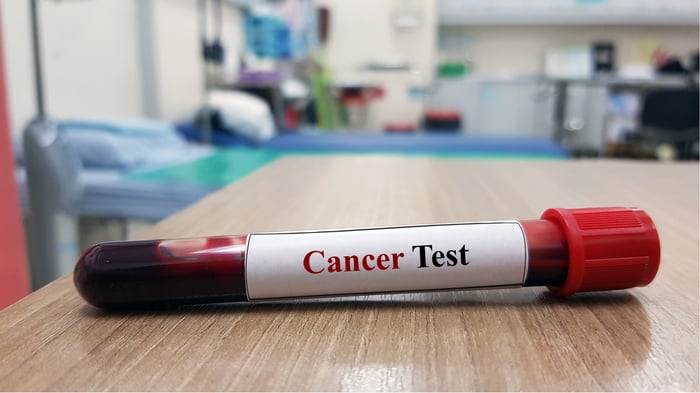 Today, Guardant makes most of its money selling its Guardant360 test, which measures 74 cancer-related genes in ctDNA. Oncologists use this information to select the proper treatment for patients with metastatic cancer, and pharmaceutical companies buy the test for use in research and clinical trials.

The company scores big wins when the test gets selected as the companion diagnostic for a specific cancer drug, as it has been for a lung cancer drug from AstraZeneca, and continued growth will be driven by more of these collaborations. The test is being evaluated as a companion diagnostic for other forms of lung cancer and for breast cancer, and recently became the first liquid biopsy to be approved by the U.S. Food and Drug Administration for tumor mutation profiling across all solid cancers.

The company also sells GuardantOMNI, a much broader test of 500 genes in ctDNA that's used by pharma companies in researching new cancer drugs. Guardant thinks the potential market for therapy selection applications of its tests is $6 billion.

Supplemental treatments in early-stage cancer patients and surveillance in survivors

The market for Guardant's products gets much bigger when they are used earlier in the diagnosis and treatment of disease. Early-stage cancer patients are sometimes given chemotherapy to shrink the tumor before surgical removal, a treatment known as neoadjuvant therapy. Adjuvant therapy, or the administration of chemotherapy after surgery to kill any remaining cancer cells, is also a common practice. Guardant has developed its LUNAR-1 assay to help oncologists identify which patients will benefit from neoadjuvant or adjuvant therapy, and as a tool for recurrence monitoring.

Today, LUNAR-1 is just sold for research purposes but if clinical tests are successful, these applications in early-stage cancer will provide a substantial boost to the company's growth. Guardant estimates the market opportunity to be more than twice its currently addressable market, at $15 billion.

The really big prize that Guardant -- along with a number of competitors -- is chasing, though, is early detection of cancer in asymptomatic patients. The first step for the company will be its LUNAR-2 test as a screening tool for colorectal cancer (CRC).

Colonoscopies will remain the gold standard for CRC screening, since physicians can detect and remove pre-cancerous polyps before the disease gets a chance to develop in the first place. And stool-based tests such as Cologuard from Exact Sciences are established, but over 30% of the U.S. population who should be screened don't stay up to date with their tests, avoiding colonoscopies and not following through with stool-based tests. Guardant hopes to make its LUNAR-2 liquid biopsy part of the regular menu of blood tests patients get in office visits, meeting a need for a screening technique that doesn't rely on initiative by the patient.

LUNAR-2 is in a clinical trial for CRC screening, but the company is also anticipating developing LUNAR-2 tests for early detection of multiple cancer types in high-risk individuals such as smokers or people with hereditary risk factors. The potential market for these screening tests is a whopping $33 billion, according to Guardant.

Competitive risks, but plenty of opportunity

Guardant faces growing competition in the space for liquid biopsy, which is no surprise given the enormous opportunity. The latest development is the acquisition of Grail by Illumina, meaning the maker of the gene sequencing machines Guardant Health uses will be encroaching on its testing space. Grail is working on early detection as well as recurrence monitoring and is expected to launch its first blood test for detecting cancer in asymptomatic patients next year. This will be significant competition for Guardant in its target markets in the long run, but in the next few years, the higher visibility of liquid biopsy may actually help Guardant win acceptance for its own products.

Last year's growth rate is unsustainable, and the company will likely settle into a pace similar to the guidance it issued for the full year of 2020 before the pandemic hit, which was for a revenue increase of 31%. The company isn't profitable and is not likely to be for a few years to come. But Guardant has a history of beating growth expectations, and with such a huge opportunity ahead of it, the company's business should continue to support a rising stock price for a long time. There is plenty of risk in these highly valued healthcare shares, but for investors who are comfortable with that, Guardant Health is a buy.

Why Guardant Health Stock Was So Healthy Today
370%